In 2018, research conducted by the Leichtman Research Group found that 78% of households still watch traditional satellite or cable TV.

Looking at that statistic, you wouldn’t think that TV viewing is on the decline — but it is, and with it, TV ad spend.

For instance, considering research from the same group in 2018, you’ll see 69% of homes in 2018 were subscribed to a video streaming service — which is up from 52%, just two years prior.

On top of all that, internet usage itself has risen to over four billion users since last year. That number encompasses over half of the global population, with China, India and the United States ranking ahead of all other countries in terms of internet users. 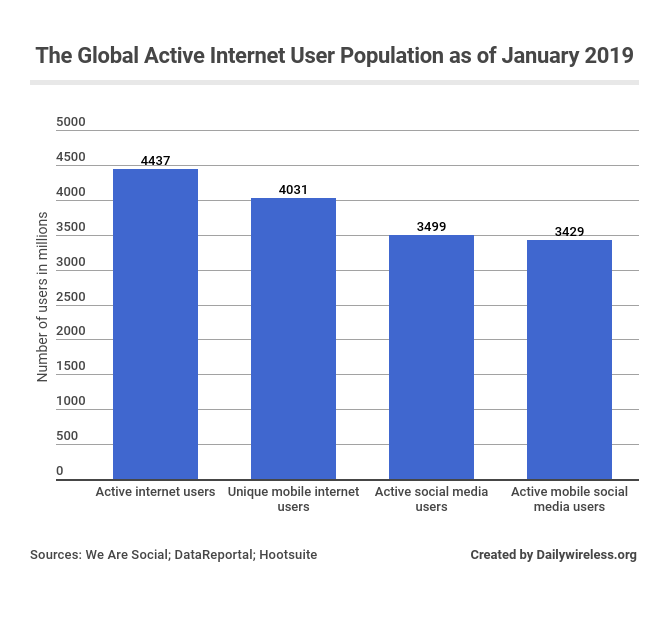 Traditional TV viewing has dropped dramatically since 2012, particularly among 18-24 year olds. In the next few years, we’re going to continue to see a decline of TV viewing — and with it, a steep drop-off of traditional TV advertising in favor of using digital media as the preferred advertising platform.

Here, I’m going to explain why.

The Decline of TV Advertising

TV advertising spend actually climbed 16% from 2010 to 2017, according to analysis by ARK Investment Management. And yet, conversely, TV viewing decreased in that time by 20%.

In years past, TV was the only form of media you could use to reach a massive market during prime hours — but now, people aren’t watching as much.

The way we see it, there are a few components to this shift.

First, a study by Omnicom Media Group’s Hearts & Science agency found that nearly half of Millennials and Gen Xers are no longer viewing video content on traditional TV.

Instead, they are choosing to view content on newer streaming platforms — Netflix, Hulu, Amazon Prime, and YouTube TV, which have been taking over the viewing space.

In fact, on average, they’re consuming 30 hours of video content on streaming platforms per week. This makes these generations “unreachable” through traditional advertising methods, particularly since most streaming platforms, like Netflix, don’t allow brands to advertise on the site.

Additionally, when these audiences do watch regular TV, they aren’t solely engaged in the show — for instance, on commercial breaks they’re likely to pull out their phones or other devices, so they might not remember or watch TV commercials at all.

If these losses continue as projected, by 2023 viewing hours could be less than half what they were in 2010, and cut in half again by the year 2028.

ARK’s research suggests that if marketers begin to take these dropping viewing hours into account and continue to shift their budgets toward digital methods, the United States’ TV ad revenue could plummet to less than half its current levels over the next 10 years.

The Rise of Digital Advertising

In contrast, online streaming platforms have been experiencing massive growth. For example, YouTube TV increased its viewership by more than 10X between 2010 and 2017.

In addition, in 2019, digital ad spending will surpass TV ad spend, and traditional ad spend, for the first time ever. It’s also projected that by 2023, digital will exceed two-thirds of total media spending.

But why exactly is this happening? Why the shift? Let’s dive into that further. Here, I’ll outline five reasons digital ad spending is surpassing traditional.

The cost difference between TV advertising and digital marketing methods is tremendous. A 30-second TV ad — which may or may not reach your ideal audience — will cost you over one-third of a million dollars … plus setup costs.

In contrast, while you need to hire employees to conduct SEO and potentially invest in SEO products, SEO itself is free, and can help you organically reach your target audience over the long-term. PPC and email marketing have cheap set-ups, and could cost anywhere from a few cents per click to a few dollars.

Frankly, that sort of disparity — while it makes sense logistically — is fairly ludicrous.

Traditional TV advertising lets you broadcast to anyone who turns on the channel. To reach a specific audience to whom your product will appeal, you need to guess what sort of TV programming could appeal to your ideal demographic — it’s difficult to apply or collect any audience-specific analytics.

With TV advertising, the closest you can get to understanding a TV channel’s audience is through ratings like Nielsen ratings or the Gross Ratings Point. These ratings are used to estimate the percentage of the desired demographic on a particular channel through statistically relevant sampling.

The downside to TV ratings like Nielsen is that, 1) these are estimates, not exact numbers; and 2) as an advertiser, you still need to pay to broadcast to anyone who views that channel, not just your intended demographic. It’s a wide-net strategy.

Digital media methods, however, are able to mine personal data on a more individual level, allowing for dramatically greater personalization. You’re searching for a “green Columbia jacket?” Well, my company has that jacket, and we’ve applied the right filter to catch your search term on Google instantly.

If you don’t buy the jacket today, that’s okay — we can use retargeting to show you an ad on your social networks about our green Columbia jacket, and remind you of your interest in the future.

Plus, we can create different ads for different segments — hikers looking for sturdy Columbia jackets in the summertime, versus skiers who need athletic cold-weather jackets.

TV can’t say the same — it’s estimates and wide-nets all around.

Leading off the last point, digital media advertising methods allow you to track, measure, and make adjustments necessary to optimize your ads — in real time. Everything from adjusting a few words, a color, or a filter can be done quickly, and cheaply.

Every change you make to your digital marketing campaigns or content can be made quantifiable by tracking CTRs and conversion rates to identify exactly where something needs to be tweaked, and how — and, again, you’ll see quickly if you made the right choice.

TV ads, in contrast, need time to see if they’ll pan out, and they can’t be adjusted easily … or affordably. You can make multiple versions upfront of the same advertisement to air in different regions, but beyond that, it’s clumsy and expensive to make tweaks and adjustments.

TV used to be the king of storytelling — in a short span of time, you’d get a scene, a protagonist, a problem, and a solution. Internet initially just used banner ads, which, while annoying, were effective — but only in the short-term.

Eventually, digital advertisers had to figure something else out. Slowly, they started to determine more versatile methods — images, images in slide decks, and video.

Users are already increasingly shifting toward the internet and internet content as their preferred method of entertainment. Online video ads are a powerful threat to TV because it’s ultimately a familiar type of storytelling, and on the platform preferred by consumers.

As mentioned earlier, viewing has shifted from traditional media to digital. And ultimately, where attention shifts, advertising should follow. In 2019, brands will need to consider digital methods if they want to reach their target audience, many of whom are using online streaming services more than they’re using their cable box.

Why TV Is Still Around

I’m going to play contrarian for a moment, here.

Digital media seems to be killing TV advertising, but maybe it’s not — or, at least not entirely. Research by WARC suggests that consumers actually pay more attention to ads on TV than they do on YouTube or Facebook. In fact, TV held more than twice the active viewing than YouTube, and 15 times more than Facebook.

Ultimately, TV still works for advertising. It’s often effective to diversify the channels on which you promote your products or services — and TV is one of those channels. So, while digital media may be killing TV advertising’s spot as the #1 channel, it likely won’t go entirely by the wayside.

However, we’re going to say it again — where attention shifts, advertising follows. Despite research suggesting things aren’t as dire for TV ads as you might think, the numbers are still pretty clear on at least one front: more consumers are shifting toward viewing content online.

This means, as marketers, you need to be devoting more of your budget to where your audience is. TV doesn’t have to be cut entirely — and probably shouldn’t be — but finding the right mix of digital and TV is critical for finding success in this new age of online-first viewing.

This article first appeared in www.peterlevitan.com