Amazon often seems to be going a mile a minute in every direction. Snapping up Whole Foods to boost its grocery business. Making the home speaker a hot item with its Echo device. Building a streaming video service to challenge Netflix. And, oh yeah, running the world’s biggest e-commerce site.

With less fanfare, the company has also been gearing up its advertising business. Amazon has long been viewed as a sleeping giant when it comes to digital advertising, given its huge customer base and wealth of consumer purchase information.

Well, the giant could be rousing.

Agency executives and media buyers say Amazon has been more aggressive lately about earning their ad dollars and offering a range of ad options both on and off Amazon.com. That effort is boosting awareness of Amazon among clients and helping it attract more ad spend.

“I have seen a complete about-face where they’re engaged, they’re collaborative, and see the value,” said Jeremy Hull, VP of innovation at digital agency iProspect, in an interview with CMO.com. “They’ve really changed their tune about working with agencies.”

Not Completely Convinced
That said, ad industry veterans and analysts caution that Amazon has limitations as an ad partner, and it still meets skepticism from marketers whose products compete with Amazon’s own branded items or who have their own e-commerce ventures.

Still, agencies and advertisers welcome the prospect of Amazon becoming a credible challenger to Google and Facebook, which dominates digital advertising. Together, the two accounted for 59% of the $71 billion U.S. online ad market last year.

Amazon doesn’t break out advertising revenue in its financial statements. But its ad business is still tiny by comparison to the two biggest players, totaling $1.1 billion in 2016, per eMarketer. The research firm expects that figure to reach $2.4 billion in 2019.

A Morgan Stanley report in April offered a more aggressive estimate—putting Amazon’s ad sales at $2.6 billion last year, with projections to nearly double to $5 billion in 2018.

At the root of Amazon’s appeal for marketers is the vast trove of shopping data it has amassed over time on millions of customers, including its 80 million Prime members. As with Google search ads, Amazon sellers and brands bid on search keywords for more prominent ad placement on results pages. The U.S. Morgan Stanley report found 85% of searches had more than one ad unit at the top or right side of pages.

Amazon’s ad offerings also include display units on the home page and product pages. Morgan Stanley estimates revenue from Sponsored Product Ads will increase about 43% to $2 billion, while display advertising will grow at almost the same rate to $1.7 billion.

Warming Up
Agency executives credit Amazon with adopting a more open and collegial approach of late. “We would reach out to them every once in a while to say, ‘What can we do together,’ and there wasn’t a whole lot of interest or capability,” said Jason Hartley, head of paid search and social at 360i. “But in the last six months, that’s really changed.”

He added that clients of the agency still haven’t started spending in any measurable way yet with Amazon, but told CMO.com he expects that to change in the coming months and years.

At ad buying giant GroupM, Amazon is increasingly on clients’ radar, according to Evan Hanlon, the agency’s head of platforms. “I think we’ve seen a lot more engagement [with Amazon]in the last year,” he said. He attributes that, in large part, to the Amazon Advertising Platform, the company’s demand-side platform (DSP) that allows advertisers to target Amazon customers off of Amazon.com.

“Once you start being able to extend the use of some of that really rich data to the open programmatic stage, and bring that intelligence to wherever those consumers live the other 90% of the time they’re online, that for us is the real opportunity,” Hanlon told CMO.com. 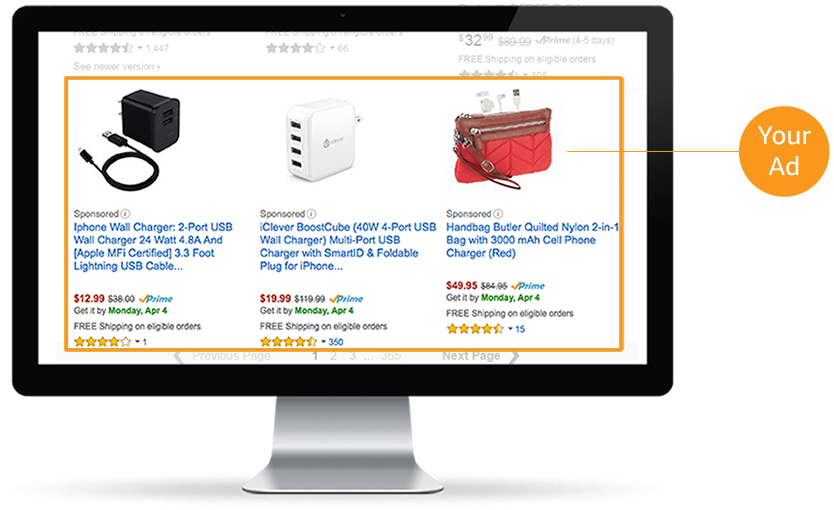 That approach also means expanding the scope of advertisers to brands that don’t necessarily sell directly on Amazon but want to increase awareness among the site’s users. So an auto insurance company, for example, might run a campaign targeting people who have researched cars or bought auto parts through Amazon’s Vehicle or Garage sections.

As a result, clients that in the past might not have considered Amazon a viable marketing platform are finding new opportunities to do business with its media services arm, Hanlon said. That, in turn, has led to GroupM spending more with Amazon in the past year on behalf of clients.

Work Ahead
Even with more ad offerings, though, Amazon is hardly about to threaten the hegemony of Google and Facebook. Monica Peart, an eMarketer analyst, suggested Amazon still has inherent challenges that limit how fast it can ramp its ad business.

“E-commerce is a very specific activity, so shopping has been the driver of most of their ad products. They really haven’t, until very recently, delved into other types of advertising,” she told CMO.com. That means categories such as CPG and consumer electronics tend to be among the largest advertisers on Amazon.

And because most e-commerce activity still happens on the desktop, Peart said Amazon hasn’t been able to capitalize on the dramatic rise in mobile usage as much as ad-driven platforms. Google, for instance, gets about two-thirds of its ad revenue from mobile, and Facebook, almost 90%.

When it comes to hurdles, ad industry executives also acknowledge large CPG and other clients are still wary of advertising with a company that sells competing private-label brands. Amazon now offers its own products in more than a dozen categories, including pet supplies, home goods, and groceries.

“What we hear from a lot of clients, particularly the CPG giants, is, ‘Why am I going to sell on Amazon when they have their own private-label products?’” said Cooper Smith, who heads Amazon-related research for digital consulting and research firm L2 Inc. They might worry, for example, that Amazon will favor its own products in organic search results over third-party competitors.

“Ultimately, it’s about trust and [Amazon] rolling out new initiatives slowly so that brands understand how to use them and how effective they are,” Cooper told CMO.com. For its part, Amazon told CMO.com it treats all advertisers and products, including its own branded ones, equally, to ensure the best customer experience.

Further, Saurabh Sharma, Amazon’s director of worldwide advertising platforms, maintains the company enjoys a particular advantage in being able to show marketers the impact of campaigns on buying and other customer interactions.

“Understanding what worked and using that to drive more effective media plans is a relatively new trend for marketers because they’re getting more adept at understanding what it means within an e-commerce environment,” Sharma told CMO.com.

Regardless, much of the recent buzz around advertising on Amazon centers on newer ventures, including Prime Video and its Echo device. The company, for example, began experimenting with ad-supported programming last year in its reality show The Fashion Fund. And companies such as Uber and Domino’s have built branded services into Alexa on the Echo.

How much additional ad revenue Amazon will eventually get directly from such properties is hard to predict. But they’ll provide Amazon even more consumer data it can sift through to help marketers reach audiences on or beyond Amazon.com.

This article first appeared in www.cmo.com