Snap Inc., the parent company of the popular photo-messaging and storytelling app Snapchat, is having a productive autumn.

A couple of weeks ago, Snap filed confidential documents for a coming stock offering that could value the firm at $30 billion, which would make it one of the largest initial public offerings in recent years. Around the same time, it began selling Spectacles, sunglasses that can record video clips, which have become one of the most sought-after gadgets of the season.

And yet, even when it’s grabbing headlines, it often seems as if Snap gets little respect.

Though Snapchat has overtaken Twitter in terms of daily users to become one of the most popular social networks in the world, it has not attracted the media attention that the 140-character platform earns, perhaps because journalists and presidential candidates don’t use it very much. Snapchat’s news division has become a popular and innovative source of information for young people, but it is rarely mentioned in the hand-wringing over how social media affected the presidential election.

And because Snapchat is used primarily by teenagers and 20-somethings, and it seems deliberately designed to frustrate anyone over 25, it is often dismissed as a frivolity by older people (especially readers of a certain newspaper based in New York who have my email address).

This is all wrong. If you secretly harbor the idea that Snapchat is frivolous or somehow a fad, it’s time to re-examine your certainties. In fact, in various large and small ways, Snap has quietly become one of the world’s most innovative and influential consumer technology companies.

Snap, which is based far outside the Silicon Valley bubble, in the Venice neighborhood of Los Angeles, is pushing radically new ideas about how humans should interact with computers. It is pioneering a model of social networking that feels more intimate and authentic than the Facebook-led ideas that now dominate the online world. Snap’s software and hardware designs, as well as its marketing strategies, are more daring than much of what we’ve seen from tech giants, including Apple.

Snap’s business model, which depends on TV-style advertising that (so far) offers marketers fewer of the data-targeted options pioneered by web giants like Google, feels refreshingly novel. And perhaps most important, its model for entertainment and journalism values human editing and curation over stories selected by personalization algorithms — and thus represents a departure from the filtered, viral feeds that dominate much of the rest of the online news environment. 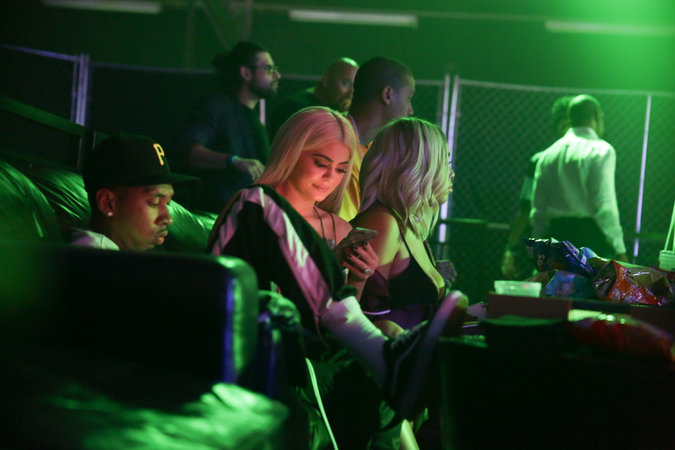 Kylie Jenner, center, with Tyga, left. Celebrities use Snapchat to give fans access to their lives. CreditRebecca Smeyne for The New York Times

Snap is still relatively small; its 150 million daily user base pales in comparison to Facebook’s 1.2 billion, and its success is far from assured. In its novelty, it can sometimes veer toward the bizarre and inscrutable. And it’s not obvious that all of its advances are positive. (For instance, I’m not sure that it’s always better for our relationships to lose a record of our chats with friends.)

Yet it’s no wonder that Facebook and its subsidiaries appear obsessed with imitating Snap. As a font of ideas that many in the tech industry hadn’t considered before, Snap isn’t just popular, but also increasingly important.

“Regardless of what happens, they’ve reshaped the social media landscape,” said Joseph B. Bayer, a communications professor at Ohio State University who has studied Snapchat’s impact on how people communicate. “They’re making risky moves, trying to rethink what people want online as opposed to taking what’s already been done and adding a new flash.”

Techies value disruption, and it’s difficult to think of another online company that has shuffled the status quo as consistently as Snap has over the past few years.

Before Snapchat, the industry took for granted that everything users posted to the internet should remain there by default. Saving people’s data — and then constantly re-examining it to create new products and advertising — is the engine that supports behemoths like Google and Facebook.

At its founding in 2011, Snap pushed a new way: By default, the pictures posted through Snapchat are viewable for only a short time. At the time, it was a head-scratching idea, one that many assumed was good only for sexting. To the tech industry’s surprise, disappearing messages captivated users who had been afraid that their momentary digital actions might follow them around forever.

Snapchat’s “ephemeral” internet — which has since been imitated by lots of other companies, including, most recently, Instagram — did not just usher in a new idea for online privacy. It also altered what had once been considered a sacred law of online interaction: virality.

Every medium that has ever been popular online — from email to the web to social networks like Facebook — has been pervaded by things that are passed along from one user to another. This is not the case on Snapchat. Though Snapchat has introduced some limited means of forwarding people’s snaps, the short life of every snap means there is no obvious means for any single piece of content to become a viral hit within the app. There are no ice bucket challenges or Chewbacca moms or Macedonian teenagers pushing fake news on Snapchat.

The diminution of personalization algorithms and virality also plays into how Snapchat treats news. Snapchat’s primary format is called a Story, a slide show of a user’s video clips that are played in chronological order. This, too, is an innovation; before Snapchat, much online content, from blogs to tweets, was consumed in reverse chronological order, from the most recent to the oldest. Snapchat’s Stories, which have since been widely copied, ushered in a more natural order — start at the beginning and go from there.

A few years ago, insiders at Snapchat noticed that Stories were an ideal vehicle for relaying news. They could be crowdsourced: If a lot of people were at a concert or sporting event or somewhere that breaking news was occurring, a lot of them were likely to be snapping what was happening. If Snapchat offered them a way to submit their clips, it could spot the best ones and add them to a narrative compilation of the event.

While Silicon Valley was shunning editing and curation done by humans, and instead relying on computers to spot and disseminate news, Snapchat began hiring producers and reporters to assemble clips into in-depth pieces.

The company calls these Live Stories, and they have been transformative, unlike any other news presentation you can find online. Every day, Snapchat offers one or several stories about big and small events happening in the world, including football games, awards shows and serious news.

For instance, this summer, while the rest of the media were engulfed by Hurricane Trump, Snapchat’s news team spent days following the devastating floods in Louisiana. That in itself was unusual, but Snap’s presentation was also groundbreaking: Rather than showing the overhead shots or anchor stand-ups that are conventional on TV news, Snapchat offered video from inside people’s houses, from shelters, from schools. It mixed the macrostory of an impending natural disaster and the government’s response to it with the microtragedies of personal loss, and even the lighter moments of humor and boredom in between.

When a knife-wielding attacker went on a rampage at Ohio State Universitythis week, Snapchat’s news story was similarly remarkable. Between scenes of government officials and students describing the attack, there were clips captured by students holed up in classrooms, expressing their fear and sense of bewilderment over what was going on. It wasn’t just an informative story, but it engendered a sense of empathy for its subjects that is rare in the news.

Snapchat has said that it thinks of itself as a camera company rather than a social network. This sounds like marketing puffery (after all, it only just started making its first actual camera, Spectacles), but I think its determination to set itself apart from the rest of the tech industry is important to note.

Snap can free itself from Silicon Valley’s accepted norms because it doesn’t think of itself as just another Silicon Valley tech company. It’s time we all started to see it that way, too.