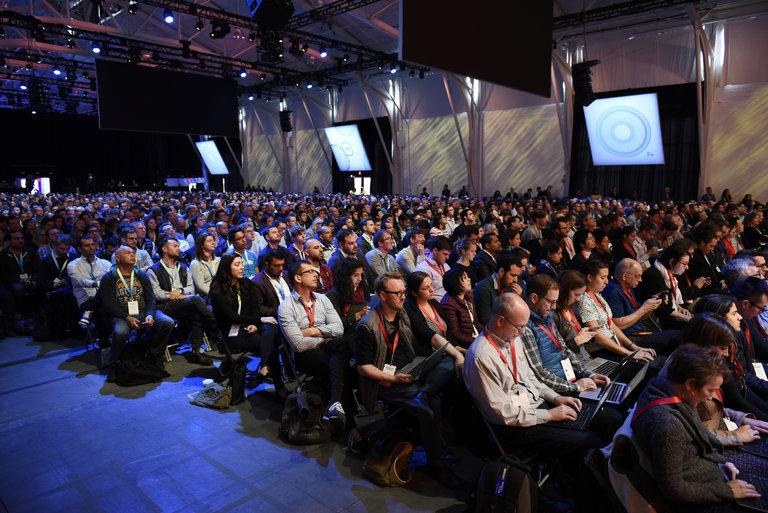 Attendees at a Facebook developers conference in April. As it has for traditional editorial content, Facebook has become a primary distributor for many publications’ sponsored posts, even though outside sponsored content was not officially permitted until April, when the social network published formal guidelines. CreditMichael Short/Bloomberg

For some publishers unsettled by a fast-changing online advertising business, sponsored content has provided much-needed relief.

In recent years, publications large and small have invested in teams to make sponsored content — written stories, videos or podcasts that look and feel like journalistic content — hoping to make up for declines in conventional advertising. To varying degrees, they have succeeded.

Younger companies like Vice and BuzzFeed have built whole businesses around the concept. The Atlantic expects three-quarters of its digital ad revenue to come from sponsored content this year. Slate, the web publisher, says that about half of its ad revenue comes from native ads, as sponsored content is also called, and the other half from traditional banner or display ads. Many major newspapers, including The New York Times, have declared sponsored content to be an important part of their strategies.

But as the relationship between publishers and social platforms likeFacebook grows closer — and as more straightforward forms of advertising are devalued by ad-blocking and industry automation, the role, and definition, of sponsored content has shifted. Now, publishers, social media companies and advertisers are negotiating new relationships.

Audiences have migrated away from news websites and toward Facebook and other social media destinations, which for a competitive price can provide advertisers access to larger and more finely targeted groups of people, challenging the value of a publisher’s own channels. With a weaker claim over audiences, publishers have been left to compete for advertising on different terms, leaning less on the size or demographics of their readerships, and more on the sorts of campaigns they can engineer for advertisers — campaigns that are then used across the internet.

“The differences between five years ago and now, in client expectations, are enormous,” said Keith Hernandez, the president of Slate.

The resulting arrangements are more client-agency than advertiser-publisher, and advertisers are looking to media companies for a full range of services, from the production of campaigns to the often paid-for placement of the content across the internet and social media.

“We have the basic building blocks of a full-service agency,” said Jon Slade, the chief commercial officer of The Financial Times. And The New York Times recently characterized the work of its T Brand Studio as “platform-agnostic.”

As it has for traditional editorial content, Facebook has become a primary distributor for many publications’ sponsored posts, even though outside sponsored content was not officially permitted until April, when the social network published formal guidelines.

Facebook’s welcome of sponsored posts was broadly seen as a promising and necessary development. But some publishers were troubled by the manner in which Facebook said it would display sponsored posts and by how much power it put in the hands of advertisers.

Under Facebook’s system, all advertisers must be disclosed and displayed as co-authors under the post or video, a level of disclosure that is required by the Federal Trade Commission.

In addition, these advertisers are now privy to a wide range of information about their sponsored content posted on Facebook — something that once was visible only to the publisher. They also get a deeper and more profound layer of data: They can see how much money was spent on Facebook promotion to drive traffic to the post in order to meet targets, a common and sometimes lucrative practice for publishers, who have been able to significantly mark up the price on such distribution.

What’s more, Facebook invites the advertiser to pay to promote their sponsored content on their own, making them less reliant on the publisher for distribution.

From Facebook’s point of view, this transparency eliminates inefficiency — why let middlemen charge extra for an audience that Facebook is selling? But for publishers who sold advertisers on their ability not just to create posts but to make sure they are seen, either through clever promotion or paid placement, such visibility can be deflating.

This change poses a persistent and tantalizing question to increasingly savvy advertisers: Could we just attract eyes to our posts ourselves? And if not now, maybe soon?

The change also discourages any illusions about how easy it could be for publishers to make money from native advertising. Sponsored content — which, in 2016, often means video — is expensive to produce and difficult to do well. Controlling distribution, albeit through Facebook, was for some a more profitable lever, and a way to pad deals that, while often growing in size, offered thin margins.

This is, of course, a boon to advertisers. “Many native campaigns are quite expensive, and if you limit the work you’re doing to the creation of content, and leave the distribution to the brand, then it can become more affordable,” said Stephanie Losee, head of content for Visa.

With less ability to charge for distribution, on their own channels or others, and a growing dependence on margin-squeezing outside platforms, publishers may be left to compete with creative agencies on their turf. Publishers becoming ad agencies, in other words, means competing not just with one another, but with the agencies that already exist.

In this nascent new order, competitors are defined largely by their limitations. While the terms and prices that publishers can accept from advertisers are set by the need to support a connected news or entertainment organization — the reason they chose this controversial path in the first place — conventional agencies are hampered by a dependence on lucrative TV work, from which they are accustomed to low volumes and high margins. Accordingly, publishers’ pitches often focus on price: their ability to create more content for less.

Such a situation, in which publishers join a broader competition for advertising production dollars, would be a testament to how much and how quickly media distribution has changed. Publishers may get back in the running for advertising deals lost in recent years, but much like the editorial content they produce, their ads will succeed or fail in contexts over which they have less and less control.

Bryan Goldberg, founder of the women’s website Bustle, views these changes with optimism, at least as far as they affect larger publishers. “Gross margins have slightly decreased, but not anywhere near enough to offset the upward movement in scale,” he said.

For smaller publishers, or those without backing from venture capital, the situation is less heartening. “Running a full-scale sales, marketing and operations team requires tens of millions of dollars of annual expenses,” Mr. Goldberg said.

Facebook, for its part, has provided a preview of how such a system might mature. A program that the company calls Anthology is meant to help video publishers “lend brands their creativity, storytelling expertise and video production know-how.” It is being used by companies like Vox Media and Vice with advertising clients to produce videos that will then be promoted on Facebook.

Started last year, and quietly expanding to include more publishers, Anthology offers hints at what a platform marketplace managed from the top down might look like. It is tightly controlled, with a clear division of labor: The advertiser pays; the publisher creates; Facebook promotes. (Snapchat recently introduced a similar program, matching clients with a mix of publishers and ad agencies for campaigns.)

For now, despite uncertainty, publishers will most likely keep pushing forward. “It’s kind of past the point of turning back. You kind of have to see if it can work,” said Joe Lazauskas, editor of Contently, a content marketing and editorial firm. “There’s not a lot of alternatives.”

Ms. Losee, who previously ran the sponsored content operation for Politico, the politics news website, suggested that publishers’ half-decade push into online native advertising will ultimately help them, but only up to a point.

“Sponsored content can’t replace the revenue from traditional advertising,” she said. “I think the future business model for publishers, in this disintermediation of the media era, is a work in progress.”