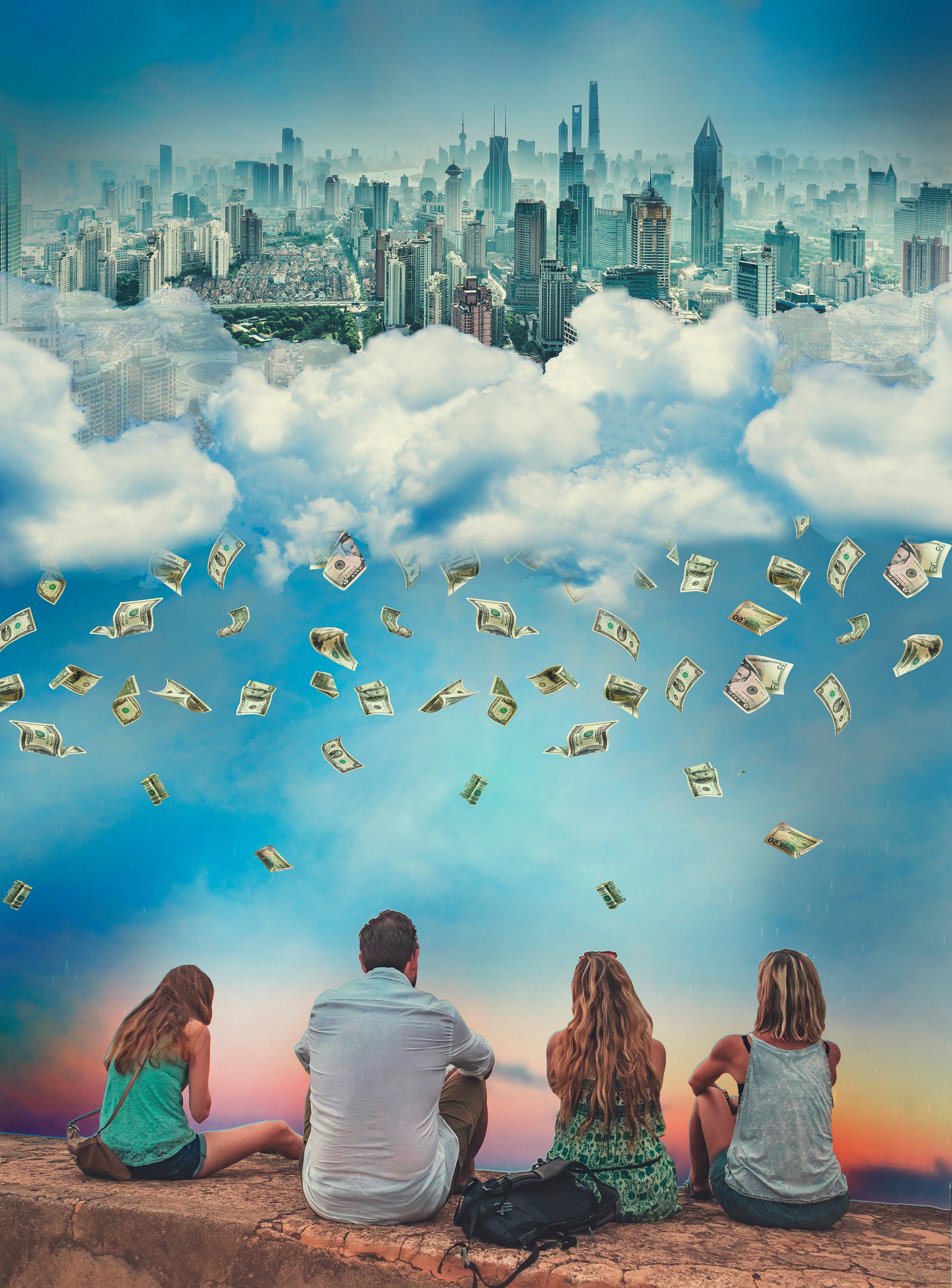 When the cracks in the facade begin to show, just keep calm and consider supply and demand.

The year 2015 was a heady time to do marketing for tech startups. The venture baronry that controlled the fates of founders had decided that markets, rather than engineering or personnel, made or broke new companies. If you were a strategist or a creative, swagger came with the job, along with corporate Uber and free lunches of glistening sushi. You’d enter a pitch meeting in your sharp blowout and bravura nail art—every time; it was all about the rose gold accent nail that year—extremely confident that a solid creed preceded you. The only thing startups need is markets.

Marketing was on fleek, just as “on fleek” was on fleek. Those were the days. I was the editorial director of a tech marketing shop based in San Francisco, and—having come up as a blowout-deprived journalist—I felt almost high on the luxe marketing-chick lifestyle. Not only did the job often seem like one long perk, but it was important. I knew, almost by heart, “The Only Thing That Matters,” the 2007 essay by Marc Andreessen, in which the oracle of Menlo Park argued that markets are, indeed, “the most important factor in a startup’s success or failure.”

But didn’t the product matter? The team? Not really. Andreessen was blunt: With a great market, a company can handle a staff of half-wits or jerks because “the team is remarkably easy to upgrade on the fly.” What’s more, he wrote, “the product doesn’t need to be great; it just has to basically work.”

VCs had also soundly discredited pricing as the key to success. (When a sector is indifferent to the laws of supply and demand, that is some serious irrational exuberance.) “Innovation,” too, was yesterday’s news. Disappointingly, for those of us who cottoned to the folktale of a new economy driven by brilliant little Edisons and Teslas in Everlane, technological breakthroughs were, by 2015, believed to be too easily copied. Instead, success lay in branding flourishes—Snapchat ghosts, Instagram influencers, the massive glass lantern that is Istanbul’s Apple store.

We in marketing also held tight to Rachleff’s Law of Startup Success, named for Andy Rachleff, another VC god who cofounded the firm Benchmark that made a mint betting on eBay, OpenTable, Snapchat, Twitter, and Uber. Rachleff’s Law: The number one company killer is lack of market.

I liked to associate things like payment software and organic-snack subscription boxes with such universally admired ideas as Apple, love, or Banksy.

And so, flush off earlyish rounds of venture capital, startups paid us to identify, reach, and soften up prospective consumers, using an alchemy of surveys, intuition, design, blue-sky ideation, typography, ethnographies, direct email, advertising, events, comms, logos, PR, stunts, and (in theory) art, literature, and film. And of course my specialty: decks. These are the sententious keynote presentations, used to dazzle investors or recruit employees, that try to get a startup to seem like a holy mission. In my decks, I liked to associate things like payment software and organic-snack subscription boxes with such universally admired ideas as Apple, love, or Banksy.

We marketing teams came to believe we alone could save startups from untimely deaths by achieving the desideratum to end all desiderata: product/market fit. PMF. Products were seen as placeholders that were to be broken, iterated on, pivoted from. By contrast, a nice loamy market, primed, was a joy forever. The everything. In the right market, anything—vanilla-­honey vape, ancient grains meal-­delivery service—can find purchase. Though not all startups believed marketing was the silver bullet for success, the ones that came to us seemed to think: If you build it, they will come, and if they come, you will find a way—even if far, far down the road—to sell them mugs. Or memberships. Or ads, or some freemium bunk.

The problem was the usual. We were bullish for too long. As we watched the big agencies, we saw that even the best marketing couldn’t quite compensate for a certain miniature blood test that didn’t work. Nor, at another agency, could Instagram influencers turn disaster-relief tents into a sexy island bacchanal worthy of Kendall Jenner. From our firm’s gleaming digs, we shuddered as we watched the first cracks in the facade of Theranos. Later, other offerings with marvelous marketing—Jawbone, Hampton Creek (Just Mayo), and Airware—burned through millions of dollars trying to get the optics right on products, services, or business models that were, yeah, janky.

Moreover, when it came right down to it, staffing did matter, especially because teams underperformed when mismanaged by bumptious founders like Uber’s Travis Kalanick and WeWork’s Adam Neumann. Teams willing to work with volatile, arrogant management weren’t so “remarkably easy to upgrade on the fly,” as Andreessen had once led investors to believe; word gets around about people like Kalanick and Neumann. And then, after shake-ups like the ones at Uber and WeWork, startups generally seem more shaken than revitalized.

Four years ago, when companies had profound problems with their models, leadership, or products, marketing came to be seen as not just a way to lipstick pigs but as a way to block and tackle regulation, to keep secrets, to shut out anyone who wanted to so much as see the product.

So marketing went from the only solution to the smoke that suggested fire that suggested indictments. To be fair, at the advent of the social networks, VCs could be forgiven for thinking that marketing was the whole game. Facebook, Twitter, Snapchat, Pinterest, and Instagram were acquiring users to make a network and attract more users: The market (users) is the product (the network). So by acquiring users with marketing you were simultaneously building your product. VCs used to love the idea of a young big shot who saw a vast market that the old didn’t: the diary writers who would contribute to Tumblr. The lonely hearts that became Facebook. Investors also swooned at the idea of using relatively cheap marketing magic to get millions of users hooked on something and then cashing in.

The investors cashed in. But social media companies had to turn into galactic data Hoovers to become profitable, and the naive hope that one day startups could trade on the users, accounts, or subscriptions they’d acquired meant that the early years of a company were expected to be devoted to UA. It’s not that that logic didn’t hold up; it’s that users used to come cheap to divey, bare-bones joints like Twitter, and they’d stick by glitches and unpopular updates because they had made them their own and had nowhere else to go. Now users cost much more to court—have you seen the freebies offered at companies like the home-­products club Grove Collaborative?!—and with too many apps already on their phone, they enter new brand relationships more warily. Then, unless they’re blinded by love, they tend to jump at the first signs of glitchiness.

When Blue Apron ill-advisedly went public in 2017, it had a valuation of nearly $2 billion. With brilliant marketing, it gained a multi-furlong lead among meal kits, including an also-ran I worked on, and it had an unshakable reputation for being the luxe one. At the same time, I remember taking one look at my first, lovely, logo-adorned box and thinking: This can’t last. Sustainable seafood, no GMOs, antibiotic-free and five-star, verdant herbs? The margins must be nearly zilch. But to reduce cost would be to reduce quality, and to hold onto a market of pious foodies, Blue Apron couldn’t risk that. So the company kept spending without hiking prices, while still throwing no end of freebies at customers to gain loyalty. In May, the NYSE warned Blue Apron that it was in danger of being delisted. It’s currently valued at about 94 percent less than it was at its IPO. Maybe attending to supply and demand is not such a quaint superstition after all.

Companies that do manage to blind users by love, like the Calm meditation app, now seem to concentrate on the product, while essentially bootstrapping. Between 2012 and 2016, investors, evidently late to get religion on mindfulness, turned Calm down by the dozens on the grounds that it was “fluffy” and “a load of nonsense.” Founders Michael Acton Smith and Alex Tew decided to do what entrepreneurs did before startups were called startups: work on the product on a Scrooge budget with fewer than 10 employees out of a one-­bedroom apartment. They gave little away but rain sounds and a short free trial; once you paid, the app provided lovely, sleepy music and stress-­relieving meditations for its users. Of whom there are now 2 million active subscribers. Gaining traction with extensive, elegantly produced content, rather than giveaways and marketing jazz, has allowed them to expand their offerings to meet the desires of subscribers, who pay up to $156 a year for their services. And well after the company turned profitable on its own terms, in 2017, VCs came calling. Now I’m not saying the Calm people are good people and Blue Apron people are not. I’m just saying Calm has been valued at $1 billion. Meditate on that.