In February, 3G-owned Kraft Heinz Co. wrote down the value of its Kraft and Oscar Mayer brands by $15.4 billion. 3G co-founder Jorge Paulo Lemann described 3G’s mistake of not spending enough to sustain brands: “We bought brands and we thought they would last forever.”

Have firms become complacent about marketing and sustaining their brands?

There is some evidence that the corporate marketing function has lost budget, head count, and influence. Another HBR article claims that firms do not spend as much energy and investments into marketing new products and services as they do in generating them. Are these claims true? Have firms’ commitment towards marketing changed over time? We recently examined this question using data.

It’s hard to test these claims because marketing expenses are typically not disclosed in financial statements. However, firms do disclose their advertising expenses. Although marketing and advertising are distinct, advertising expenses could represent a firm’s commitment towards marketing as a discipline. A firm with higher advertising expense is likely to have greater marketing commitment than a firm with smaller ad budget. Based on this idea, we estimated the percentage of advertising costs in total expenses for 374,242 data points (firm-year observations) representing 33,139 unique companies from 1975 to 2017. We also calculated similar percentages for research and development (R&D) expenditures. Over the past 45 years, one of them has risen substantially, while the other has declined. Until the late 1970s, companies spent about the same amount on R&D and advertising. Today, they spend ten times more on R&D. 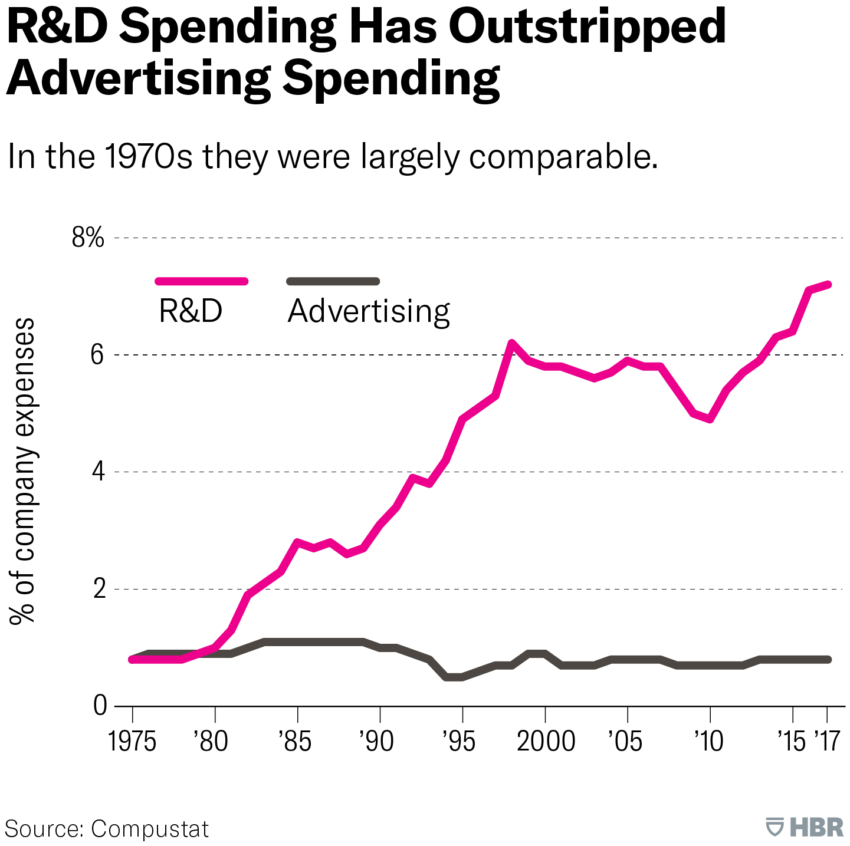 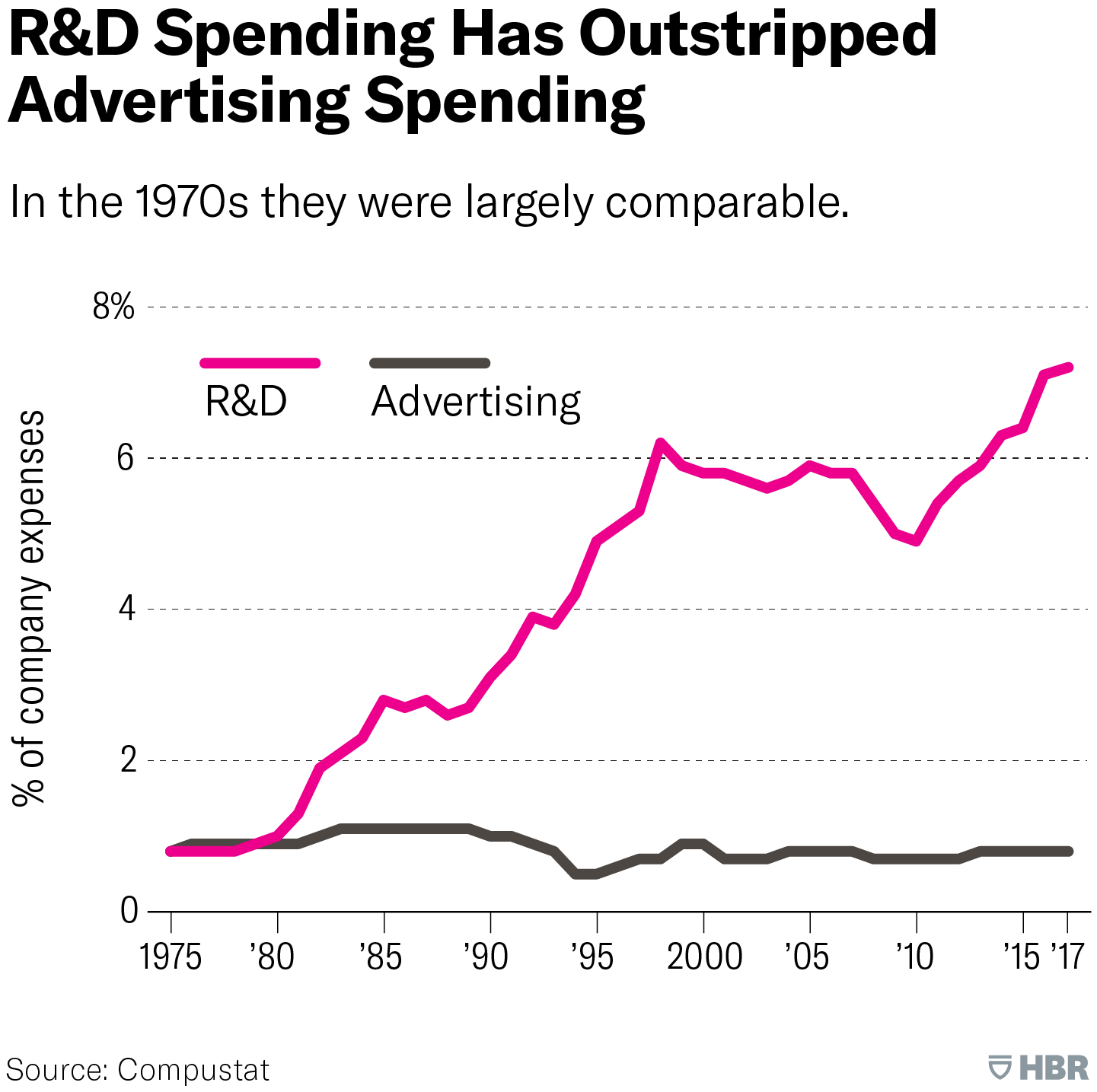 The chart above shows that firms spent more than 1% of their total expenses on advertising until the 1980s. This percentage declined to less than 0.8% in recent years. During the same period, R&D investment increased dramatically from less than 1% to more than 7% of total expenses. A part of the ad decrease can be explained by a 1994 accounting rule. Similarly, a part of R&D increase can be explained by the introduction of R&D tax credits in 1981. But neither of these regulations can explain the overall long-term trends that demonstrate a systematic shift in firms’ focus from marketing towards engineering, technology, and innovation.

You might think this trend could reflect the changing nature of firms over time. A firm listed after 1980 is more likely to be a biotechnology or an internet firm than a manufacturing firm. So, we recalculate these trends separately for retail, manufacturing, and technology industries. Retail firms continues to have similar ad expenditures—2 to 3% of total expenses—as they did in the 1980s. Furthermore, there is no significant increase in their innovation efforts. That is, these industries have not changed their business models for the last 35 years, which could explain their struggle in face of onslaught of competition from new challengers like Amazon. In contrast, the manufacturing industry has changed its business model and now spends more than 5% of its total expenses on R&D. Plausibly, more and more manufacturing activity has been subcontracted to vendors in low-wage countries and the firms have shifted their focus to high value activities such as innovation and product development. Their expenditures on advertising, however, follows the trends of the overall trend, from more than 1% in the 1980s to approximately 0.8% today. Technology firms show most dramatic change. Since 1995, they spend more than 10% of expenses on R&D and less than 1% on advertising. The fastest growing industry in the last three decades has shifted its focus away from marketing towards innovation and product development.

We also looked at the differences between small, medium, and large companies, based on their sales revenue.

While the most dramatic divergence occurred for the small firms, even the large firms have shifted their focus away from marketing and towards engineering, technology, and innovation. This might represent the sign of times—no company is safe today and without innovating.

Finally, we looked at spending by the top three companies in the Forbes’ 2018 list of most valuable brands: Apple, Alphabet (Google), and Microsoft. While Apple spent more on advertising than on R&D in its initial years, it reversed its expenditure patterns starting in the early 1990s. In recent years, Apple has not separately reported its ad spending, indicating a drop to below 1% of expenses. Microsoft and Alphabet always spent significantly higher amounts on R&D than on advertising. It’s clear that these firms have achieved the most recognized and valuable brands on this planet not primarily by force of advertising dollars but through their technology prowess and superior business ideas.

There are several other explanations that could partly account for our findings. First, firms might increasingly rely on acquired brands instead of developing them organically. Second, firms might achieve higher mileage from advertising dollars through more intimate knowledge of their customers and by using improved tracking and analytics. An ad shown to a specific Facebook customer must achieve greater success than an ad printed in Readers Digest — and it’s cheaper. Third, firms increasingly rely on peer networks, word of mouth, blogs, and cross-sold services to establish brands. And fourth, new firm founders may be more passionate about discovering new technologies than about marketing success.

But it is at least plausible that marketing has lost relevance relative to engineering, technology, and product development. We’re not saying that’s necessarily the case. But if that is true, it would have profound implications for organizational structures, manpower planning, and management education.

This article first appeared in www.hbr.org