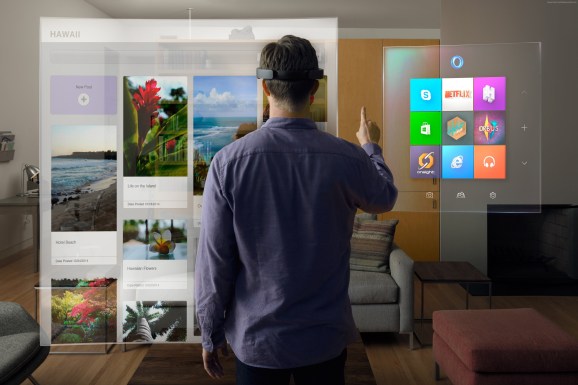 Above: Microsoft Hololens in action

Mixed reality (MR) is a new computing platform that‘s emerging from the current fields of augmented and virtual reality. MR blends the physical and the digital worlds into a single space, using a combination of cutting edge optical hardware and artificial intelligence (AI) software. Over the next 5 to 10 years, most industry analysts agree that the AR/VR market will be worth well north of $100 billion, with the vast majority coming from the AR side — in the form of consumer innovations in retail, location, or AI services. In terms of the enterprise market, that pie will be smaller, but will lean even more heavily toward AR and MR.
Currently, at the forefront of the MR revolution is the Microsoft HoloLens. Microsoft has uncharacteristically been early to market in this sector, with the HoloLens dominating almost all coverage of actual deployments of the technology. Although Microsoft enjoys an industry-leading position, it does face other threats from both new hardware entrants and established platform holders.  Read on to see how the battle lines are being drawn — and what potential outcomes could emerge over the medium term.

HoloLens moves the game on from the previous-generation MR devices — such as Google Glass — which provided little more than the ability to bring up text or simple icons over the user’s view. By contrast, the HoloLens is capable of both rendering full 3D objects and data as holograms, and of understanding the world around it in order to place those holograms in physical space. The self-contained nature of the HoloLens (it’s a full Windows 10 computer that doesn’t require wires or a network connection to function) makes it just as capable on a factory floor, or the middle of a construction site as it is in an office.

Thanks to the current generation’s $3,000 price, it is more likely it’ll be the next generation of MR devices that will revolutionize the consumer market. Meanwhile, industries as diverse as transportation, healthcare, industrial design and education are currently adopting MR via Microsoft’s device to disrupt existing business processes.

Consumer VR devices costing several hundred dollars from Oculus, HTC, and Sony run on powerful household desktop PCs that likely cost at least $1,000. They offer immersion in 3D worlds at what can be around $2,000 total, which could previously only be achieved with specialist installations costing $20,000 or more. Meanwhile, AR systems, such as Apple’s recent ARKit, allow mobile users to view the world through a window, with digital objects superimposed. Both mediums are potentially disruptive: VR primarily in the consumer space; AR primarily in the enterprise space — and have acted as gravity wells for venture funding over the 5 years, though both seem to remain perennially a few months from a great inflection point.

In new MR hardware, the two big players are Magic Leap, the $4 billion Florida-based behemoth; and Meta, the plucky Y-Combinator alumni with a comparatively teeny $73 million war chest. Despite their David-and-Goliath mismatch, Meta seem closer to actual product in the market, though neither have so far shipped devices to allow a true side-by-side comparison with Microsoft’s technology. If Magic Leap ever does ship a product, expect an all-out turf war for the enterprise space, as all that venture money may well end up being deployed to compete with an even more capable Hololens 2 that may emerge any time from late 2018.

The more interesting angle of attack on Microsoft’s current position may come from the very capable augmented reality support which both Apple and Google have added to their respective mobile platforms in 2017. The applications of ARKit and ARCore have mostly focused on the traditional ‘hold your phone up and look through it’ ergonomics, but many companies are looking past this by creating inexpensive head-mounted cradles which can transform a phone into a mixed reality device (think Google Cardboard for MR).

Disney’s recent collaboration with Lenovo to create a Star Wars head-mounted AR experience is based around this concept. If this approach proves popular with consumers, it could drastically narrow the considerable lead Microsoft has built up over its rivals Google and Apple, and bring MR to the consumer market — many years earlier than most analysts have forecast.

Uptake of mixed reality has begun, but the sprint toward ubiquity has yet to start. Historically technologies take a while, then hit hard and transform fast. With so many major tech players investing in MR, that future seems assured — but the likely big winners right now are less clear. Ultimately, as with any new medium, it’ll be the players who find the most disruptive, high value use cases for the new capabilities MR enables. With its more consumer-focused siblings riding high in the headlines, challengers to the single dominant platform are lining up and enterprise adoption is accelerating, mixed reality is lined up for an interesting next few years.

Rob Minson is C.T.O of Fracture Reality. Rob began his career in academia and holds a PhD in interactive simulation systems. He transitioned to the video games industry and has worked with both large and small teams – building interactive experiences and scalable online systems.