What makes Beyoncé so iconic? Many artists have the talent, but few keep making hits like Queen Bey. So how does she do it? And is there something about her creativity that we can learn from?

To find out, I binged on everything Beyoncé. Every song, music video, concert performance, and interview from Destiny’s Child to Lemonade. Soon, I noticed a strange pattern.

Let’s start with an example: Beyoncé’s 2008 music video, Single Ladies. It got so much buzz that Kanye West infamously interrupted Taylor Swift to call it “one of the best music videos of all time.” But most people don’t realize that this “all-time” video comes from a past time. Namely, June 1969. On The Ed Sullivan Show, choreographer Bob Fosse debuted a dance featuring three women in similar outfits on an empty backdrop…

I couldn’t believe it. Did Queen Bey really copy-and-paste like this? Surely, I thought, this must be a standalone incident. But then I saw her 2011 Billboard Music Awards performance of Run The World. People applauded her epic visuals and exotic dancing. But a closer look reveals that Beyoncé’s visuals came from Italian pop star Lorella Cuccarini.

And her moves are from Mozambique dance group Tofo Tofo:

It happened again with Beyoncé’s newest album, Lemonade. In the video for Hold Up, Beyoncé saunters down a sidewalk in her flowery dress before smashing a car window. In 1997, Swiss artist Pipilotti Rist did the same for an installation at the Museum of Modern Art.

There are more examples, including Crazy In Love, 7/11, and Countdown, where Beyoncé repeats her pattern of taking the forgotten and making it famous. So does this make Queen Bey more of a con than an icon?

If you peel back the partition on this flawless diva, you’ll find a bookworm. That’s how Beyoncé found ideas from the streets of Mozambique to the stages of Italy. She’s religious about research. For her Run The World performance, she scoured YouTube to find Tofo Tofo.

“I saw this YouTube clip maybe about a year ago,” Beyoncé said in her documentary. “I held onto that, locked it away in my memory bank and said ‘for my next project when I do uptempos, that’s how I want to dance.’”

Beyoncé’s “memory bank” is what old-time advertising execs call their “swipe file.” Long before the internet, they cut out magazine ads, put them in a folder, and adapted them into their projects. Today, Beyoncé uses her swipe file to do the same: research, record, and recall inspiration. She even attends shows to swipe ideas.

“Nobody going to want us to go to their shows, Frank,” Beyoncé once said to creative director Frank Gaston Jr. “Because we’re going to take everything…we go and meet everybody and say ‘hey great show!’ and then steal it.”

Beyoncé encourages her team to do it, too. After all, it was her makeup artist who first saw Lorella Cuccarini’s visuals. It’s because Beyoncé understands that creativity is a collective process. That’s why she works with so many people when others artists get comfortable with the same small crew. While Beyoncé keeps strong ties (close colleagues like Gaston Jr. who’s been there since Destiny’s Child), she grows weak ties (colleagues she doesn’t frequently work with) to replenish her swipe file. She’s done this more throughout her career with Lemonade being her most collaborative album yet. Beyoncé worked with an average of 9.6 writers and producers per song. That’s up from 5.9 for her first solo album, Dangerously In Love. 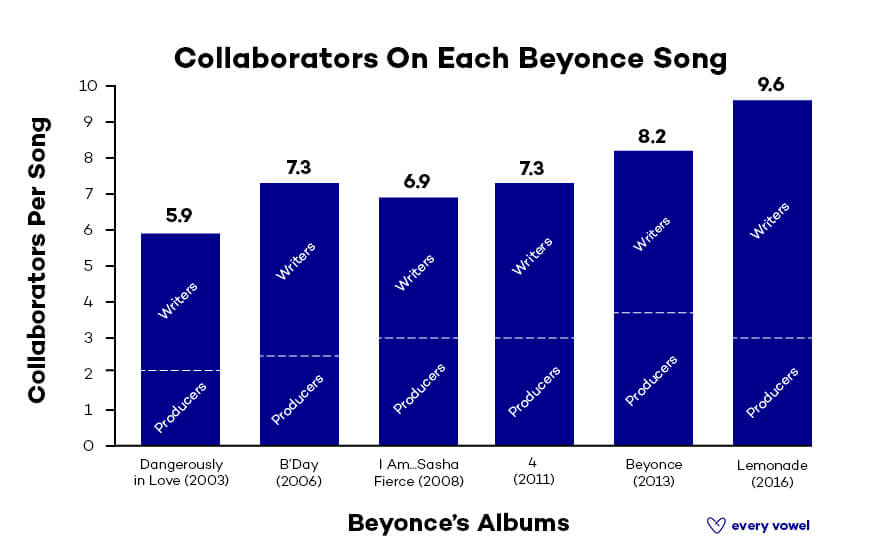 Duke Sociologist Martin Ruef found that people like Beyoncé who have more weak ties are typically three times more creative than those with small networks of friends. It’s because they branch out rather than think the same as close contacts. By letting more people input inspiration, Beyoncé puts out more masterpieces like Run The World which blends Tofo Tofo’s African dance, Cuccarini’s Italian pop and samples Major Lazer’s electro beats.

Critics who dismiss Beyoncé as unoriginal miss the point. She’s more about elevation than imitation. She credits her sources. She spent five months finding Tofo Tofo through Mozambique’s US Embassy — and hired them as dancers. In doing so, Beyoncé’s adaptations give new life to the lineage of artists behind it. In fact, before Beyoncé copied Cuccarini, Cuccarini copied a Japanese artist named Kagemu.

If Cuccarini didn’t adapt Kagemu then Beyoncé may not have discovered her work and created Run This World. Same story with Single Ladies. The most interesting nuance about Beyoncé copying Bob Fosse is how she discovered the dance. It wasn’t by digging through the 1960’s archives of The Ed Sullivan Show. It was because, in 2007, a viral video remixed Fosse’s routine to DJ Unk’s “Walk It Out.”

“I saw this…on YouTube and it’s these three ladies and one of them is Bob Fosse’s wife, who’s this choreographer, “ Beyoncé said. “They put Walk It Out to the music, it’s from like the 60s – and it’s one take and I thought ‘wow, how amazing would that be now,’”

In other words, Beyoncé made Single Ladies in 2008 because of a 2007 remix of the 1969 dance. That’s the power of copy with taste. It elevates art so more people can enjoy the past in the present.

Beyoncé’s creative process is part of a greater trend. Duke statistician David Banks researched how geniuses often cluster in the same place and time because it was easier to copy from one another. For example, Elizabethan London was home to William Shakespeare, Christopher Marlowe, Thomas Nashe and other prolific playwrights. In fact, Shakespeare copied so much that critics claimed he wasn’t a person, but a pen name for four contributing authors. Like Beyoncé, he was religious about research, scouring old books like Arthur Brooke’s The Tragicall Historye of Romeus & Juliet. In 440-380 BC, the same happened in Athens. The city gave rise to Plato, Socrates, Pericles, Thucydides, and other great minds. In 1450-1490, Florence was home to Leonardo da Vinci, Michelangelo, Donatello and other immortal artists. For them, it was easier to find inspiration because they could hear great philosophers in person or see portraits as the paint dried.

Years from now, we may look back at 2016 and say the same. We’ll talk about how the internet allowed us to swipe from anywhere and any era. And we’ll remember a Houston native named Beyoncé Knowles who did it best. But the question remains: how will you be remembered? Most of us believe creativity entails looking up at the stars and pondering until ideas hit us. But maybe, we should look back at the stars who came before us. Look at those who differ from us. After all, innovation starts as the imitation of different inspirations. It’s why we’ll face the same critics along the way. They may call us knock offs. But that’s how the greats start off. Beyoncé was once The Next Diana Ross. But today, as Oprah said, “she’s not the Diana Ross of our generation, Beyoncé is the Beyoncé of our generation.” So who’s the you of your generation?

UPDATE: there were so many great clips in the article that I decided to make a video about it. See below.

This article first appeared in www.everyvowel.com