Against the backdrop of a green screen in a studio space, Nico Santos, a star of the sitcom “Superstore,” was performing an SMH.

To translate for those unfamiliar with abbreviations popular on internet platforms, this means the actor was shaking his head, implying a judgment of “I truly cannot believe how stupid people are.”

He did an SMH while looking at the camera, then again with his eyes closed and his lips pursed in a disappointed sideways smirk. People are stupid in many different ways, and so too must be the reaction shot Mr. Santos was filming for Giphy, the company that is the best-known purveyor of GIFs, the seconds-long soundless video clips that give people a shorthand to express an emotion or reaction through their phones or computers. Most GIFs are pulled from movies, television shows and other media events. But here at Giphy Studios, the emphasis is on creating original content. 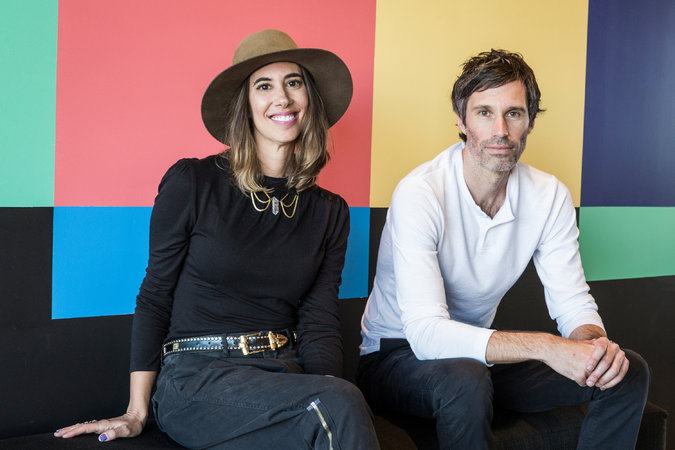 Samantha Scharff, the C.E.O. of Giphy Studios, which is making original-content GIFs with celebrities, and Brad Zeff, the chief content officer of the parent company, Giphy. CreditEmily Berl for The New York Times

“How about a ‘shake my head into a face palm,’” said Wallis Millar-Blanchaer, one of the studio’s associate producer and director.

Mr. Santos, who will appear in the coming film “Crazy Rich Asians,” removed his glasses and delivered the two-tiered SMH reaction. Then he delivered a “Girl, no.” This was followed by a ‘Yasss, queen,” and then a “EWWW”/“just threw up in my mouth.”

Like emojis, GIFs have become an oft-used replacement for words in texts and messaging apps. This gives these video snippets a lot of currency as young people increasingly favor private messaging over posting publicly on social media. A 2016 study by BI Intelligence reported that the number of global active users on four top messaging services (WhatsApp, Messenger, WeChat and Viber) was exceeding those on the Big Four social networks (Facebook, Instagram, Twitter, LinkedIn).

It also is a new marker of that increasingly atomized American achievement: fame. “You know you’ve made it when you’re a GIF,” Mr. Santos said.

GIFs (pronounced like “gifts” without the T) are now so ubiquitous that even non-techies in their 40s recognize them when shown on a phone. (“Oh those!” they will say. “Yes, I’ve see them on Facebook.”) Some 300 million Giphy daily users are sharing 2.5 billion GIFs per day through Twitter, Tinder, text messages, Slack, Gmail and, as of recently, in Instagram stories, said Brad Zeff, the chief content officer of Giphy.

Giphy Studios thinks it can help old-school companies like H &R Block break into private messaging with branded GIF campaigns. For a campaign for HP, a spinoff of Hewlett-Packard, Giphy brought in Matt Cutshall, a star on Instagram, and shot him holding an HP device and acting silly.

Absolut Vodka, known since the 1980s for its distinctive photography in advertising, has also succumbed, commissioning GIFs of the fruits that flavor its booze, twisting temptingly.

In some cases, Giphy Studios asks such companies to help cover production costs; for other brands, it offers the service for free. GIFs featuring actors, musicians and other “talent” are also made for free, with Giphy staff members assessing pop-cultural relevance in deciding who should get such star treatment.

Giphy, which was founded in 2013 and has raised about $150 million from venture capitalists, is still “pre-revenue,” to use start-up parlance. “We don’t want to turn revenue on in earnest prematurely,” Mr. Zeff said. 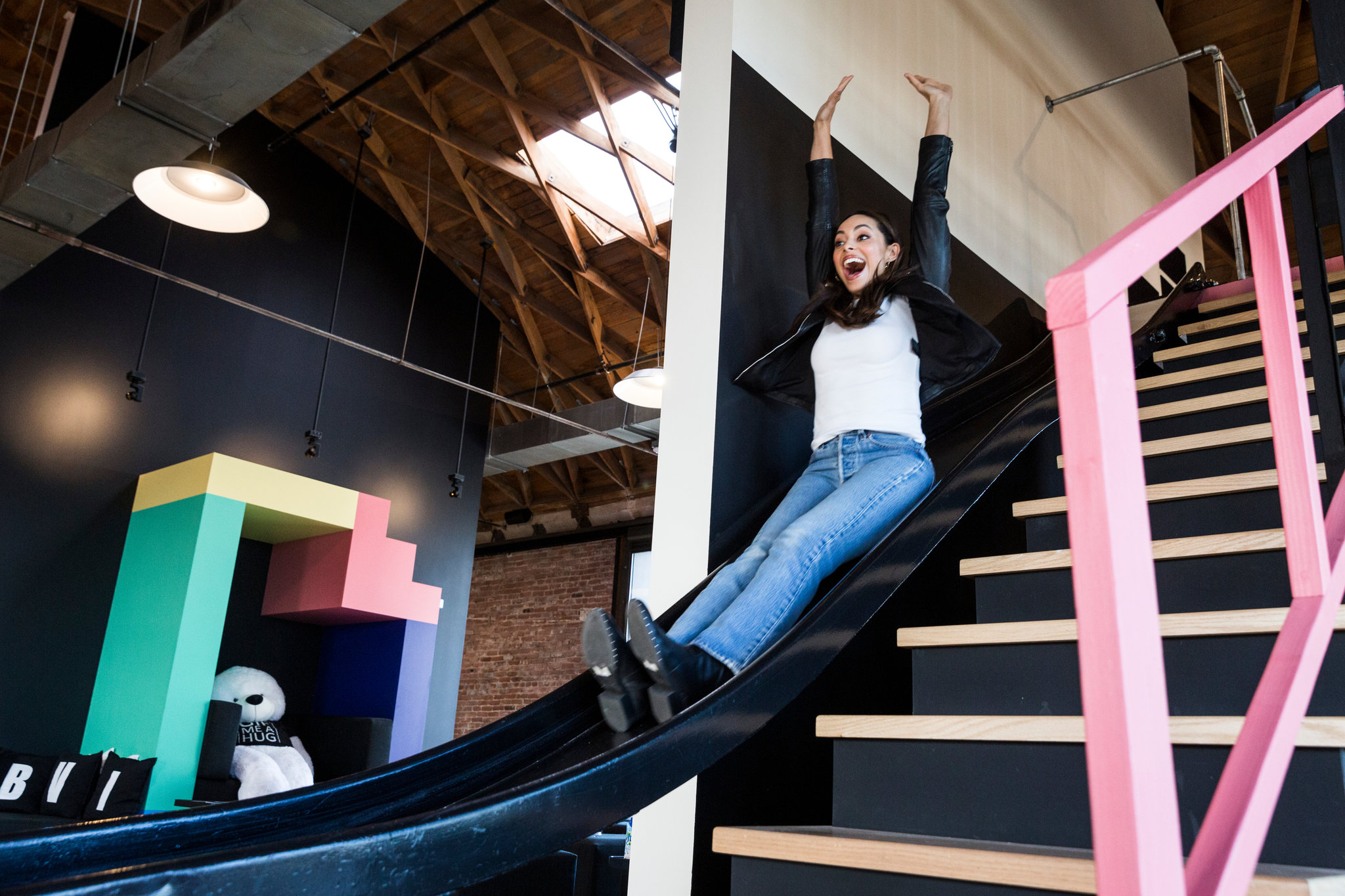 After filming, Ms. Stevens West took a turn on the office slide. CreditEmily Berl for The New York Times

Part of its strategy is to make this Los Angeles studio a hub for actors, musicians and social-media influencers on promotional tours, where they will film reaction shots based on terms that Giphy users often plug into search boxes. The dissemination, it is hoped, will make them “GIF-amous.”

“I really want it to be a stop on a press tour,” said Samantha Scharff, Giphy Studios’ C.E.O., offering a tour of the space. “You go to ‘Kimmel.’ You go to Giphy.” There is a miniature golf course that winds through the office and most of the conference and meeting tables double as Ping-Pong tables, as is de rigueur at start-ups. Pillows on couches are stitched with “LMAO” and “OMG.” There are a few different filming rooms, including one with a brick wall that the staff thinks of as its “New York stage.”

And upstairs is a steep slide that visitors are encouraged to try. You never know where GIFs might happen. “We wanted people to come here and hang out and make content,” said Ms. Scharff, whose career path has tracked the decreasing attention span of viewers (from “Saturday Night Live,” to “The Colbert Report,” to producing YouTube videos, to Giphy).

It is a risky strategy; part of the appeal of GIFs is that they are organically referential to collective nostalgia for previous pop-culture touchstones — not choreographed and overtly promotional. She and Mr. Zeff, however, have high hopes that they can change the form from a repurposed clip of existing content into an entertainment medium in its own right. “We want to be the MTV of the messaging generation,” he said.

In the summer, Martellus Bennett, then a tight end for the Green Bay Packers, came to check out Giphy Studios and toss ideas around with Mr. Zeff. Giphy then decided to send staff members to Green Bay, Wis., to GIF-ify Mr. Bennett and teammates including Aaron Rodgers as they pantomimed popular hashtagged gestures (#thumbsup, #letsgo and #middle finger). The clips racked up 150 million views in 48 hours, according to Mr. Zeff.

This December day at Giphy Studios was an unusually busy one, with Gwen Stefani stopping by at the last minute to film holiday-themed GIFs, and three other scheduled shoots: with Mr. Santos, a band called Portugal. The Man, and the actress Amber Stevens West. 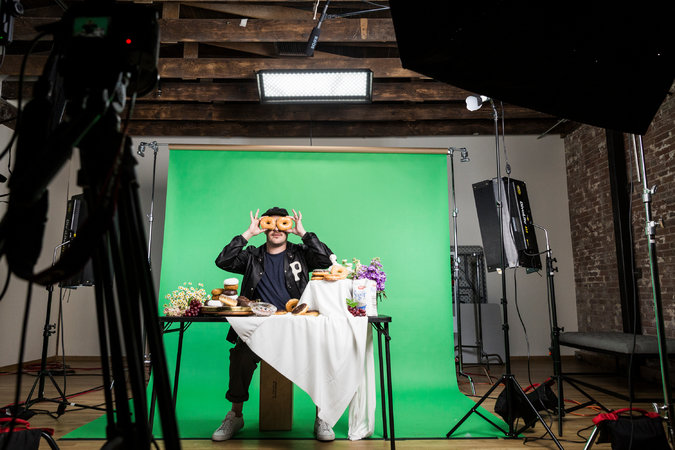 Zach Carothers of the band Portugal. The Man also paid a visit to Giphy Studios. Credit: Emily Berl for The New York Times

Against another green screen, Ms. West filmed tarot-card-theme GIFs, under the direction of Ms. Millar-Blanchaer and Michael Bruno, an associate producer and director at Giphy Studios. Best known for her role in the 2014 film “22 Jump Street,” Ms. West stood behind a white rectangular cutout that was suspended from a rod. She wore a blue cape and then a white robe over her jeans and T-shirt. This was the first time Giphy had used a costume for a shoot.

“It’s kind of like an acting exercise,” she said.

For nonactors, preening in front of a camera with directors calling out emotions to convey merely with facial expressions and gestures can be cringe inducing.

This was the case with Portugal. The Man, who are originally from Wasilla, Alaska, and who won a 2018 Grammy for best pop duo/group performance for “Feel It Still.” They arrived at Giphy Studios toward the end of the day and sat down with the production staff to get organized.

The idea was to make GIFs connecting to “internet holidays,” which tend to be popular among Giphy users — in this case National Doughnut Day, Pizza Day, Beer Day, Video Game Day/Gaming Day and Earth Day.

Mr. Bruno asked if anyone would object to these. “We have no reservations or moral compass whatsoever,” one of the bandmates said. “We’ll do anything.” The group laughed. That was before they knew they’d be asked to juggle doughnuts and pose next to slices of pizza.

In the studio, each of the four musicians took his turn and was a good sport, hamming it up for the camera as producers shouted hashtags.

Zach Carothers, the bassist, went first, and seemed relieved when he was done posing with doughnuts placed over each finger like rings. He sat down in the back of the studio and shrugged. “Our record label is always looking for interesting ways to shovel us into all sorts of crap,” he said. “I don’t know if you’ve heard, but these GIF things are pretty popular on the interwebs.”