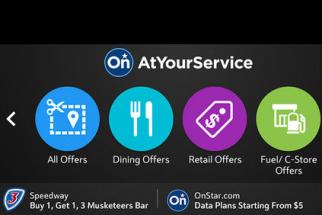 Drivers in General Motors vehicles such as the GMC Sierra or Chevy Malibu featuring the OnStar system can use it for navigation, hands-free phone-calling — and deals on snacks. The automaker’s platform knows what type of vehicle its opt-in users drive, their age range, gender, the current weather and when they are lingering in a traffic jam near a particular retailer. Its partner Koupon Media sends offers from its own convenience store and consumer packaged goods brand partners to the OnStar system.

People viewing the OnStar dashboard or a related mobile app such as the MyChevy app can click on offers, which sends the Koupon Media discount to their email. Those can be redeemed using their mobile device.

OnStar’s system aims offers from various partners based on its geographic, demographic and contextual data. For example, a deal on coffee might be targeted to drivers in the morning. The system does not employ any behavioral data, so there is no targeting based on the types of places people have visited, for example.

Ads for the whipped-chocolate candy bar resulted in a click-through rate that was ten times higher than the industry average for a traditional media buy, according to Bill Ogle, CEO of Koupon Media.

“It’s really about using the data of the vehicle to match content or coupons or advertisements to the situation of the driver — the location, how many folks are in the car, what the weather might be and so on,” said Mr. Lloyd. “The vehicle is very glanceable,” he added. “You don’t have a lot of time so you need to make whatever you put on the screen really count.”

While convenience stores and gas stations have natural relevance to driving, before GM joined up with Koupon Media, it was difficult for the company to get product-level offers to its OnStar users because products are not associated with locations and addresses, said Mr. Lloyd.

At this stage, GM is still figuring out how best to charge for ad placement. Does a cost-per-driver model work best, for example? The company also is still in the early stages when it comes to measurement, but is interested in being able to track the location points drivers stopped at along the way to redeeming an offer, for example.

This article first appeared in www.adage.com

Kate Kaye covers the data industry for Advertising Age and is the main contributor to the Ad Age DataWorks section. Before joining Ad Age in November 2012, Kate worked as a writer and reporter covering the digital marketing industry since 2000, focusing on beats including data-driven targeting, privacy, and government regulation. Kate helped cultivate the online political campaign beat, and in 2009 wrote "Campaign '08 A Turning Point for Digital Media," a book about the digital media efforts of the 2008 presidential campaigns. Before joining Ad Age, Kate was managing editor of ClickZ News, where she worked for nearly 7 years.