THE GEICO commercial that made its premiere this summer seemed like a standard 30-second television ad. It features two men building sand castles on a pristine beach with their children. “Guess what I just did?” one of the men asks. “Built a sand castle?” the other responds. “Ha — no. I switched to Geico and got more,” the first man says.

But another version of that ad was created by the Martin Agency, which worked on the commercial for Geico. This one was half as long, with text that popped up as the men spoke, and the word “Geico” appeared after six seconds.

The goal: to make the ad understandable to people who viewed it onFacebook without sound. 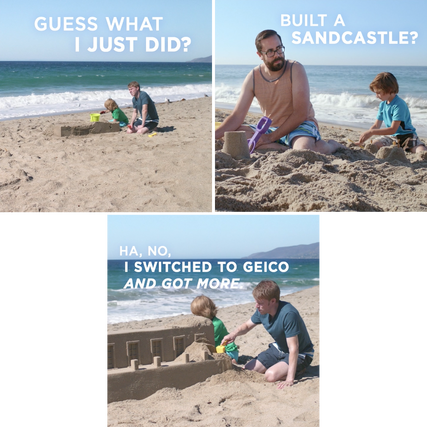 Scenes from the Geico ad that was adapted, with text over the video, to be used on Facebook. The video was also resized to be less horizontal. CreditMartin Agency

In the last year, Facebook has been vocal about its plan to put videos at the center of the social network. But to bring advertisers on board, it has had to convince them that their commercials can work in a News Feed where videos autoplay in silence, nestled between engagement photos and birthday wishes. As Facebook has urged brands to edit and reframe commercials to resonate in that environment, advertisers have asked whether such efforts are worth it.

“For a lot of our clients, Facebook is a very important platform, so thinking about how it’s going to play out there without sound is coming into the discussion earlier and earlier in the process,” said Neel Williams, a creative director at the Martin Agency, which has also repurposed TV Chips Ahoy commercials for Facebook.

Facebook executives will probably also have to to field questions about how it gauges the success of video ads, after the company was forced to apologize last week for an error in the way it measured video viewership. The miscalculation greatly overstated how much time, on average, its users spent watching videos, and the incorrect numbers were displayed to partners, including advertisers and publishers, for more than two years.

Even before Facebook drew criticism for that metric, advertisers were charting new territory with sound on Facebook. Facebook has visited the Martin Agency “several times” to share tips on how to tailor ads effectively, Mr. Williams said, and it has emphasized the importance of catching a user’s attention in the first three seconds of a video, at which point it officially counts as a view.

“If you’re a creative person, this is an extraordinary time to be in the opening chapters of quite an extraordinary development platform,” said Mark D’Arcy, chief creative officer of Facebook’s Creative Shop, which helps companies tailor their ads to the social network.

Facebook says more than 500 million people watch videos on it every day and viewers have the sound on 50 percent of the time. But the Martin Agency said its data showed that 94 percent of its video ads on Facebook were viewed in silence. Omnicom’s BBDO, which tracks Facebook video views across more than 18 advertising clients, said that on average 82 percent of users watched without sound. Publishers have said the figure is between 82 and 85 percent.

“You can’t elicit the same amount of emotion as when you have sound and visual working together,” said Julian Cole, head of communications planning at BBDO.

Even as such ads have been shortened or created anew for the web, particularly for mobile devices, where Facebook says 75 percent of its video views occur, sound has remained on in apps like YouTube and Snapchat.

“When people are watching on YouTube, they have earbuds in and the volume up,” said Kellie Judge, senior vice president of global media partnerships at Amplifi, the central investment division of the ad agency Dentsu Aegis Network.

“With Facebook and Twitter, people are scrolling a feed with the volume off. The distinction we’ve been talking more and more about is not just creating for television versus in-feed, but how it’s so different from other video,” she said.

It is difficult to tell brands they need to tailor their ads for each platform — not to mention pay TV-like dollars to place them there — without proof of their effectiveness, so “Facebook and Twitter are doing a ton of research in that space to combat the advertiser hesitation,” Ms. Judge said.

“People are less willing to sit through an online ad than a 30-second TV commercial,” said Michael J. Wolf, managing director at Activate. “Most online video ads get about six seconds of play before they are skipped.”

While Facebook promoted the “sight, sound and motion” of its premium video ads in a March 2014 statement, invoking a mantra used by television advertisers for decades, it has since mostly embraced silence. It introducedan auto-captioning feature for video ads in February and instructed brands to “express your message visually,” citing an internal study that showed “41 percent of videos were basically meaningless without sound.”

In April, Facebook shared examples from companies like Wells Fargo and Wrigley, and it made recommendations like start “your video with lifestyle and product shots, recognizable spokespeople, action scenes or a vivid background to spark interest.”

Facebook did confirm last month that it was testing videos that autoplay with sound through some users in Australia, but that it was in the early stages.

Joe Marchese, president of advertising products for the Fox Networks Group, said the lack of sound was a factor that made it hard to assess the value of online video advertising against traditional TV commercials.

“It’s not that this is not valuable. It’s just that it’s not the same thing,” Mr. Marchese said. “TV dollars would flood into online if online impressions were the same thing as TV impressions, meaning 100 percent of the screen, the sound very likely on, and all 30 seconds viewed.”

In June, Snapchat said more than two-thirds of the videos on its platform, including ads, were viewed with sound, which has proved appealing to advertisers even though the platform is much smaller than Facebook and YouTube.

“Sound ensures that users are getting the most robust and comprehensive exposure to our film as possible,” said Doug Neil, executive vice president of digital marketing at Universal Pictures.

Imran Khan, Snapchat’s chief strategy officer, went so far as to say that “ads that play without sound are more like a moving banner.”

“The most important factor is where the consumer’s focus is,” Mr. Williams, of the Martin Agency, said. “You can have the most epic TV spot that is a visual feast, packed with the best, most well-written voice-over, read by the most famous person, but if you’re not paying attention to it, then it doesn’t matter.”