In the revised and updated edition of their book Leading Successful Change: 8 Keys to Making Change Work, Wharton adjunct management professor Gregory P. Shea and Cassie A. Solomon, president and founder of The New Group Consulting, Inc., offer a tested method for organizational change, which they have developed over a combined 50 years of experience. Throughout the book, they share success stories from a host of companies. In this excerpt, Shea and Solomon outline Viacom’s approach to large-scale transformation using the authors’ “Levers of Change,” a comprehensive approach to systematically altering the work environment to bring about desired change.

In their book, Shea and Solomon define the functions of these “Levers” as follows: the Organization Lever includes the structure and organizational chart; the Workplace Design Lever details the layout of physical space; the Task Lever outlines processes, protocols, and pathways; the People Lever focuses on the skills and orientation of the focal business unit or department; the Rewards Lever outlines rewards tied to the desired behavior; the Measurement Lever serves as a scorecard of performance; the Information Distribution Lever determines who knows what, when and how; and the Decision Allocation Lever decides who participates when, and in what way.

Viacom began life in 1952 as a conglomerate named CBS Films. The name Viacom appeared in 1970. The organization’s many twists and turns include 16 acquisitions from 1985 onward, beginning with MTV. Multibillion-dollar acquisitions came in 1993 (Paramount) and 2003 (Comedy Central). Thirteen of the acquisitions came after 2000 and seven in the past decade, with Pluto TV being the most recent (2019). Performance proved increasingly elusive for key assembled parts as well as the corporate whole.

Bob Bakish became Viacom’s CEO in December 2016. He had worked at the company since 1997 and most recently led its international division. Now, the once mighty media giant was severely challenged. Bakish’s predecessor, Philippe Dauman, had recently stepped down as part of an ongoing legal dispute over Viacom’s underperformance. The company faced a debt problem, and its movie studio, Paramount Pictures, had just posted a $445 million annual loss. Its stock price had plunged nearly 50% in the previous two years. Morale was at an all-time low. Bakish described the lack of leadership vision: “The biggest issue I saw, as if there weren’t enough problems, was that there was essentially no plan.”

Viacom, as Bakish noted, needed a strategic plan, and he needed to retool Viacom for the digital age. Years spent working in silos handicapped the company by limiting its ability to leverage its size. Bakish needed to promote better ways of working across Viacom’s core brands: MTV, Nickelodeon, Nick Jr., Comedy Central, BET, and Paramount Network. To create a cross-brand strategy, Bakish pulled the Organization Lever, the first of our 8 Levers of Change, and assembled a set of task forces made up of representatives from Viacom’s various brands. With their input for desired outcomes and areas of change, he and his senior team created a strategy to unify the company.

They pulled the Organization Lever again by creating network groups, such as Viacom Digital Studios, that cut across all Viacom’s brands. Janice Gatti, vice president of communications and culture at Viacom International Media Networks, remembered in an interview with us that “Bob instituted senior team meetings to bring the brand presidents together to collaborate. Within my function, we now have regular senior communications team meetings where we work together to identify intersections between our brands.” 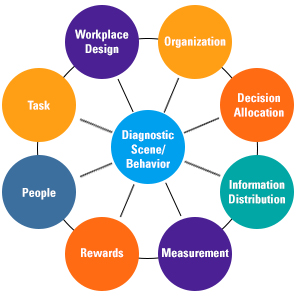 Working together across brand silos meant changing the way people work together, pulling the Task Lever. And it clarified how decisions are made, pulling the Decision Allocation Lever.

“Lots of things are easier to do when you work in a silo; it’s clear who is in charge. When you work across silos, it’s important to understand where decisions are going to be made,” Julia Phelps, the company’s first-ever executive vice president of communications, culture, and marketing, told us in an interview. “The ultimate output is a lot better, but it can take longer to get there.”

For example, creating a cobranded film required figuring out new ways of working together. Does the power lie with the studio? With the brand managers? Who has the ultimate say? A joint decision-making process emerged for these new projects.

Bakish viewed culture and morale as central to turning around Viacom’s performance. “It was clear to me that our culture, like the business itself, was in need of a turnaround and an evolution,” Bakish told Variety. “At Viacom, the culture had always been a real point of pride and a competitive advantage for us. We needed to bring that spirit of creativity back. We needed to evolve the culture.” Consequently, he pulled the People and the Organization levers to signal the importance he placed on culture by appointing Phelps to the new role.

Gatti recalled the importance of that change and the way Viacom handled internal communications. Viacom pulled the Information Distribution Lever with emphasis.

“We wanted to open up the communications by giving direct access to Bob, so staff could understand his vision and understand him as a leader,” she said. “We launched ‘Bob Live’ for the first time on December 14, two days after Bob was appointed CEO. Bob talked very candidly about the challenges Viacom was facing.”

The company uses Workplace (a Facebook product) to livestream the Bob Live discussion to employees all over the world. Bob Live events continue quarterly and include watch parties in Viacom’s offices (17 in the United States alone) with questions coming from people in the room as well as remotely.

“When you work across silos, it’s important to understand where decisions are going to be made.”–Julia Phelps

Previously, internal communications to Viacom’s 10,000 employees largely consisted of one email each quarter tied to the company’s earnings reports. Those working in one brand probably had little, if any, knowledge of what went on in any other part of the company. Viacom created “That’s What’s Up,” a weekly email that features five “wins” from around the company, to send one unified Viacom message on an ongoing basis. The team also created a regular video communication called “5 Questions With,” featuring interviews with people throughout the company, at varying levels, chosen for doing something interesting or innovative. And Viacom created “Going Up,” a video series interviewing people who were quite literally going up — in elevators in Viacom offices around the world, talking about the company’s culture and reacting to companywide events.

Information flowed through every screen in Viacom’s buildings, now programmed like a TV channel to reinforce messages about strategy, values, and the Viacom culture. “Very intentionally, we blurred the line between internal and external communication,” Phelps said. “We were intentional about posting everything we were doing on social media, thinking that if our employees are excited, it’s good for the external world to see that. And having our employees read positive things about the company externally was good for morale.”

Relatedly, the Viacom team also pulled the Workplace Design Lever when it created a tool, the Viacom Brand Book, which provides employees with clear language about Viacom as a unified company. The book, which is updated quarterly, emphasizes Viacom’s mission, vision, values, and culture. The team also created manager discussion guides, ensuring that the message would cascade down through and across the organization.

One of the boldest initiatives was a three-day “multi-market next-generation town hall” event called Spark, created to reinforce the new, shared Viacom culture.

“We had to revamp internal communications to be modern and multi-platform. We wanted it to feel true to who we are, so as a creative company, we shied away from doing anything that felt too corporate,” Phelps said.

To market the event to employees beforehand, everyone received a badge that unlocked an augmented reality/virtual reality (AR/VR) experience promoting Spark. Across three days, over half of Viacom’s employees participated in Spark. A global core curriculum around Viacom’s new mission, vision, and values; cross-company panels; discussions about the future of content streaming; product demos; and skill-building sessions took place at over 40 Viacom offices around the world and were livestreamed globally. During the event, Viacom employees shared 500 million social impressions about their experience at Spark.

Information flowed through every screen in Viacom’s buildings, now programmed like a TV channel to reinforce messages about strategy, values, and the Viacom culture.

“The energy and the excitement of Spark was incredible. We ended it with a party on the last night that was attended by thousands of people. It was a cultural moment and a statement,” Phelps said.

Company performance provides the ultimate measure of success for any change initiative and, in this case, of creating value from mergers and acquisitions. As of this writing, Paramount Pictures has grown operating income for 10 straight quarters, MTV’s performance has completely turned around, and Viacom’s distribution business, which was experiencing problems, has renewed more than 80% of its business. In August 2019, Viacom and CBS announced their intention to merge, reuniting the two halves of the Redstone family’s media empire.

The CEO of the merged entity? Bob Bakish.

This article first appeared in www.knowledge.wharton.upenn.edu