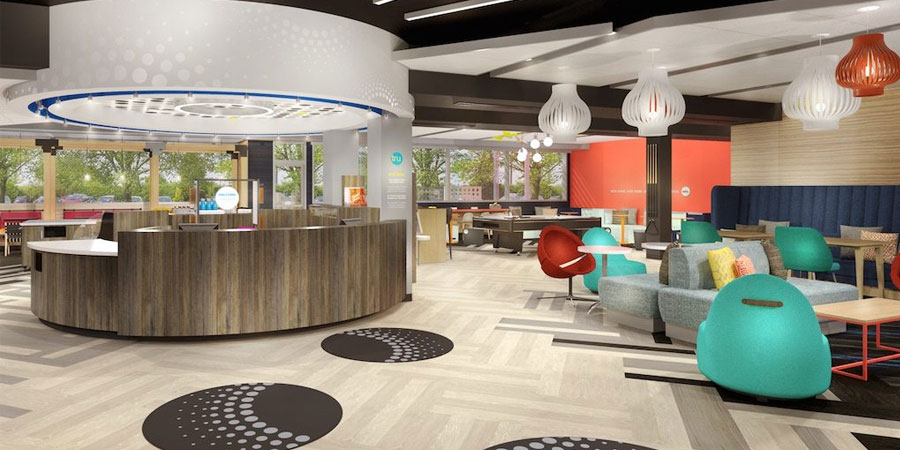 A rendering of Hilton’s newest hotel brand, Tru by Hilton, which could prove to be a model for how Hilton approaches the debut of five new brands in the near future. Hilton Worldwide

At Hilton Worldwide’s Investor Day on Dec. 8, Jim Holthouser, Hilton’s executive vice president of global brands, revealed that while the company is very happy with its repertoire of 13 hotel brands, it isn’t ruling out the possibility of adding more.

The announcement was somewhat surprising, given that Hilton CEO Christopher Nassetta has thrown a bit of shade on its biggest competitor, Marriott, for having too many brands that are similar to each other.

During Hilton’s third quarter earnings call, he said. “We are very focused on having pure-bred brands that are leaders in their individual segments, that have clearly defined swim lanes, that have premium market share and, as a consequence, help us drive industry leading organic net unit growth. That’s our strategy. Others have taken different paths… As for what Marriott or anyone else is doing, I think you need to ask them about it.”

If Hilton does go ahead with adding these new brands, the company will have to emphasize not only each brand’s distinctiveness, not just within the Hilton family of brands, but industry wide.

Holthouser acknowledged this during his presentation, saying, of Hilton’s existing brands: “Every brand has its own unique swim lane. And these swim lanes are global. Our intention is to develop brands that have global application. They’re all not global today, [but]at some point we intend for them to be.”

He also made a pointed remark, in obvious reference to Marriott, saying: “Unlike a lot of our competitors, we don’t have brands that sit right on top of each other or that share the same position, that are fighting each other for the same customers. Quite frankly, that confuses everybody.”

Whether Holthouser’s statement is entirely true is somewhat up for debate (ask yourself if you can easily distinguish the differences among brands like DoubleTree, Hilton Garden Inn, Hampton by Hilton, or Home2 Suites), but his main message is clear: the brands can’t be too similar to each other, or similar to other brands from other competitors.

Makarand Mody, assistant professor of hospitality marketing at the Boston University School of Hospitality Administration, said he wasn’t at all surprised by Hilton’s announcement.

“When you think of all the consolidation taking place across the different segments of the business, and Marriott, obviously, now with up to 30 brands, Hilton’s portfolio does feel a little light in that sense. It’s not surprising.”

During his presentation, Holthouser said the primary reason for adding new brands was revenue- and scale-driven.

He said, “Shareholders should be very excited about new brands as well because they’re new fee streams and they’re ways of growing out network effect.”

That network effect, achievable through scale, is a big reason why Hilton is going this route and, in some ways, following in the footsteps of its biggest competitor, Marriott. Hilton is now the second-largest hotel company in the world behind Marriott. With these five possible future brands in the works, Hilton’s total brand portfolio would rise to 18.

Each of the various big chains has a lot of brands: InterContinental Hotels Group has 12, Wyndham Hotel Group has 16, Choicehas 11, and Hyatt has a dozen.

Mody, for one, thinks that because so much of hotel marketing is being driven increasingly by data, “it’s possible to identify more niche markets than, perhaps was possible in the past. Each brand is becoming so hyper focused, which can be both a positive or a negative at time, but I think new brand being launched are doing a better job of being more focused.”

He added, “I see this as Hilton’s attempt to at least create that perception of more brand options and through that, I think they’re also going to promote greater awareness of the Hilton brand family.”

A CLOSER LOOK AT THOSE FIVE WHITE SPACES

Here’s what Holthouser had to say about each of those five potential brand concepts, along with our Skift Take interpretations:

Luxury and Upscale Soft Brand Collections: “We think that potentially, what makes sense right now, is for us to concentrate on some additional soft brands. Potentially something below Curio, kind of at that DoubleTree level. Maybe something above Curio at the luxury level. Because as you guys know, we’re entering that cycle right now where I think soft branding — the ability to access engines from Hilton — it’s a very attractive proposition if you’re the owner on an independent hotel without the scale and scope and the muscle of a Hilton behind you.”

Luxury Lifestyle: “[The] second thing we’re contemplating right now is potentially something in the luxury lifestyle space. Again, these are — you’ll never get hundreds of hotels in all likelihood with a brand like this, but Chris [Nassetta, Hilton Worldwide CEO] was talking about kind of the cache and the halo effect that brands like that cast. It also helps us to attract new HHonors members and get them to commit to our program and our family. So that’s something we’re looking at.”

Skift Take: This sounds a great deal like Denizen. Denizen is the name of the ill-fated luxury lifestyle hotel that Hilton attempted to launch in 2009, for which it was sued by Starwood Hotels and Resorts, which accused Hilton of using stolen trade secrets regarding Starwood’s own W Hotels to create the brand. Hilton settled the suit with Starwood in 2010, agreeing not to launch any brand in the lifestyle or branded boutique space for at least two years.

“Hilton Plus:” “We think there might be an opportunity with a Hilton Plus product, probably a line expansion or maybe it’s a separate brand. We haven’t really decided yet. But something that it’s another tool in the arsenal that helps us with really complicated, very high profile convention city, convention center projects.”

Skift Take: Perhaps they should wait to see how Sheraton Grand plays out.

Urban Microtel: “And then finally, we’re looking down in the economy space with maybe an urban microtel kind of concept, urban lifestyle economy. This is great play for next generation travelers, but at the same time this gives us something to do really, really, to be very innovative in this space. And the economics are pretty compelling.”

Skift Take: Taking a page out of the Generator Hostels, Jo&Joe playbook, perhaps? Given that Generator Hostels is reportedly up for sale for up to $500 million right now, perhaps Hilton may want to throw its hat in the ring.

WHAT HILTON NEEDS TO DO TO SUCCEED

Mody agreed with Holthouser’s objective to make sure the new brands are distinctive, but suggested Hilton take a closer look at what Marriott has been doing as of late with its newest brands like Moxy for some inspiration. “With this newer brand, Marriott is being much bolder with the personality it’s trying to create. Moxy, for example, is very different from what Marriott has done in the past and it’s really taken Marriott out of its comfort zone, but that’s what required to stand out in a cluttered market: being strong, bold, and distinctive, and having a personality. That’s something Hilton will have to work on.”

He added, “Personally, I see Hilton as being reliable — it’s got a lot of things going for it — but its [overall brand portfolio]doesn’t seem as bold, cutting-edge, and modern. It has to be bolder with its brands. Tru by Hilton is an example of them starting along in that direction, and it’ll be interesting to see how that brand plays out.”

TRU BY HILTON: A GLIMPSE INTO HILTON’S BRAND-BUILDING FUTURE

The first Tru by Hilton is expected to open in March 2017 and already, it’s become the fastest growing brand in the entire Hilton portfolio, with more than 140 executed agreements, totaling nearly 14,000 rooms, and more than 200 additional hotels in process.

Alexandra Jaritz, global head of Tru by Hilton, told Skift that when the brand first debuted, many had the impression it was a “purely Millennial brand” but she said that it’s being designed to appeal more to a “millennial mindset” that’s “cross-generational.” Early criticism of the brand’s design and marketing as having too many colors or being too loud have also been “toned down.”

Jaritz also said that Hilton is continuing to modify the models according to feedback from owners so that “every single dollar is scrutinized” in a way that is “value engineered to drive the returns necessary [for owners.]”

She also described the brand as having three pillars: “simplified, meaning intuitive, and effortless; spirited meaning to know when to engage and when to leave alone; and grounded in value.”

“We want to set expectations [for the brand]right from the beginning,” Jaritz said. “With Tru by Hilton, we want to shift the game, shift the paradigm for guests in the midscale category now.”

As Hilton prepares to position these potential new brands according to price categories and service levels, Mody said the company should also take the overall value proposition, or experience into account, perhaps even more so than the rack rate.

“Brands need to take a step back a bit more and try to understand what their value proposition is, particularly when it comes to white spaces through price segments,” he said. “Dynamic pricing has made pricing so fluid, so building a brand on price alone can become a little limiting. Newer brands really have to focus on the key value propositions they are trying to provide, as opposed to just price.”

With Tru by Hilton, it seems like Hilton is headed on that path.

And in crafting these five new brands, Hilton should also be paying attention to what Airbnb has done and continues to do: focus on the overall experience.

“It all centers around the experience and that’s where Airbnb is doing a good job. Hotels are doing that piecemeal, with different dimensions of experiences of what they offer, and I see Hilton and other brands heading in this direction going forward,” Mody said.

This article first appeared in www.skift.com