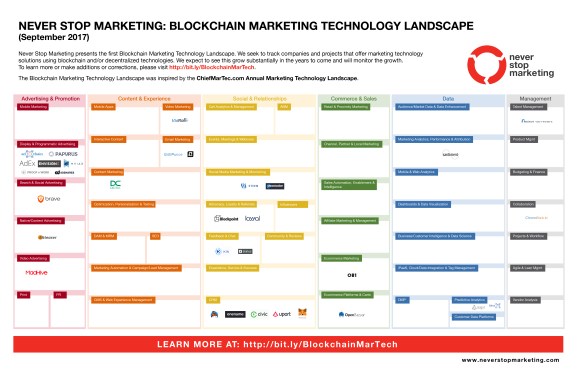 When you think of blockchain, you usually think about cryptocurrencies like Bitcoin, Ethereum, and Litecoin. While these are interesting and disruptive in their own right, it is the non-currency applications of blockchain that could truly revolutionize how we do business.

The most obvious place we’ll see this is in marketing and advertising, especially as a means of controlling or eradicating the immense amount of ad fraud across the industry.

But how many blockchain marketing technologies exist right now, and how quickly are they being launched?

The most obvious target for disruption? Adtech.

“If you have a basic understanding of the potential of blockchain technology — that it will disintermediate third parties —  and you have a basic understanding of the current value chain of digital advertising (there’s a huge amount of waste, with 44 percent of every $1 going to middlemen), then it’s fairly obvious that the industry most ripe for disruption is adtech,” Jeremy Epstein, CEO of Never Stop Marketing, told me.

The speed with which these companies are cropping up is both interesting and somewhat inevitable, given the incredible growth rate seen in Chiefmartec’soriginal martech landscape.

“What surprised me is how quickly such a large number of projects and startups have emerged to attack the lowest hanging fruit,” Epstein said. “Every day, I hear about more of them, which is why this is not a one-and-done effort.”

So why has this, the associated ICO marketplace, and other applications of blockchain technology exploded so quickly?

“Because people have realized that the ICO (or Token Generating Event, which is the SEC-friendly version) is the ‘killer app’ of the blockchain era,” Epstein said. “For the first time ever, anyone can create an open source (as opposed to proprietary, closed source) software that can be utilized, modified, built upon, forked, and preserved that also has a model to provide for the ongoing support and maintenance of the project.”

That’s important, because it changes everything, even existing open source methodologies.

“Contrast this with the way that traditional open source projects, like Linux or Apache, are funded — these are foundations that ‘pass the hat’ around each year to big companies to get their funds,” Epstein said. “Now, though, with blockchain-based cryptographic tokens that can appreciate in value as the amount of network utilization increases, the people who create a valuable open source project have a built-in way to monetize the value they create and support ongoing development forever, and those who support it early on can benefit immensely.”

The initial landscape is admittedly a little sparse, and there is plenty of white space to fill. But there are enough blockchain-powered marketing technologies available right now to help determine if this is really going to be the disruptive force we all expect it might be.

Of course, some think blockchain is a bubble that is ready to burst, while others point to the constant power struggle as banks, governments, and regulatory bodies attempt to control the technology.

“The decentralization genie (fueled by blockchain, but not limited to it) is out of the bottle,” Epstein said. “No matter what China does or Jamie Dimon says, this wave of disruption is coming. It’s part of the reason we did the landscape in the first place, so people can understand what is about to happen.”

Huge growth is coming, according to Epstein, but that also brings a new set of issues to deal with.

“We don’t need 10 different protocols for the adtech space, so people will have to assess if Papyrus, for example, is better than the others that I already profiled,” Epstein said. “We don’t need all of them.”

This means that blockchain will ultimately be just another normal marketplace. The majority of players will fail, and the minority will succeed.

“Ninety-five percent of the tokens and coins around today will be worthless in a year or two,” Epstein said. “But the 5 percent that emerge as winners? Some of those could be trillion-dollar protocols. There will be short-term fluctuations, but this is a business model disruption the likes of which we haven’t seen in a long time, so I’m tracking and building on top of that trend.”