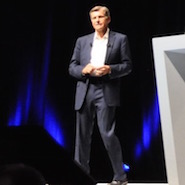 Mr. Pritchard, speaking last week at the Cannes Lions Festival of Creativity, opened his speech highlighting a number of industry issues such as the viewabilty of advertising, content marketing and click fraud, along with endless load times.

“Consumers are voting with their fingertips and turn off that which is not working,” Mr. Pritchard said. “I am defiantly using the word ‘advertising’ to describe what we do.

“Advertising is a noble and beautiful craft, but advertising has a terrible reputation, maybe that is why we are trying to re-name it content,” he said.

“Much of what we call as content should remain in a box.”

The executive referred to the “content crap trap,” in which some content created should never be opened.

“Don’t ever be seduced into the content crap trap just to get something out,” Mr. Pritchard said. “I am not passing judgment, as we are all guilty as charged.”

Mr. Pritchard went on to show a clip of a four-and-a-half-minute viral video as an example of the “content crap trap.”

Again, “advertising reaches millions of people around the world each day and has the ability to change behavior,” he said. “It is a noble business and belongs in the hands of serious professionals.” 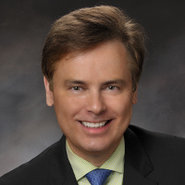 Dan Hodges is managing director of Consumers in Motion

The three points that Mr. Pritchard highlighted are “expressing your brand as a masterpiece, elevating our craft and embracing creativity as a true human endeavor.”

1. Expressing your brand as a masterpiece on a creative canvas
2. Elevate the craft – every piece of the canvas craft matters
3. Embrace creativity as a uniquely human endeavor – humans have this remarkable ability to extract ideas that leave us laughing, smiling, crying, feeling, enjoy and acting

Mr. Pritchard then showed a series of P&G brands, highlighting the above-mentioned key points. He showed examples of Pantene, which is positioned as a strong and beautiful shampoo brand. He urged brands to embrace creativity.

Mr. Pritchard then made a statement about agency relationships.

“There has been a lot of gossip about client and agency relationships,” Mr. Pritchard said. “I want to say that all that talk needs to stop.”

ADVERTISERS, PUBLISHERS and tech companies also all need to come together and pull down the silos to do great work together. It is important to know that that most important person is the consumer.

To much applause, Mr. Pritchard said that “our agencies are our partners.”