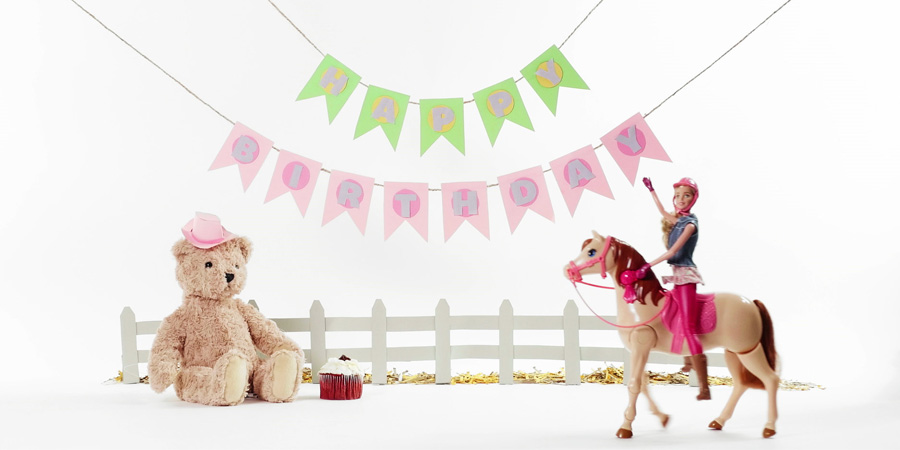 One stop-action animation video in the Toys “R” Us unboxing series showed a Barbie Saddle ‘N Ride Horse set and a teddy bear. (VIA TOYS “R” US)

One day last year, Jessica Nelson was surprised to find her toddler, Aiden, watching videos online in which people opened box after box of new toys, from Kinder Surprise chocolate eggs with trinkets inside to all manner of Disney merchandise.

“The next day we saw him watching more and more and more of them,” said Ms. Nelson, who lives in Toledo, Ohio. “He was pretty obsessed.”

She and her son, who turned 3 on Monday, had entered the world of “unboxing” videos, an extremely popular genre on YouTube where enthusiasts take products out of their packaging and examine them in obsessive detail. This year, according to YouTube, people have watched videos unveiling items like toys, sneakers and iPhones more than 1.1 billion times, for a total of 60 million hours.

The videos’ ability to captivate children has led toy makers, retailers and other companies to provide sponsorships and free toys to some of the most popular unboxing practitioners, who in turn can make a lucrative living. Hasbro and Clorox have ads that YouTube places on the videos.

Now, marketers are becoming even more involved. This season, Target hired four YouTube toy experts to create videos of favorite toys. Two of them were prominent child unboxers, including Evan of EvanTubeHD, who turned 10 on Sunday. Running on the retailer’s website, the videos promote its online children’s gifting hub and wish list app.

Other advertisers are diving in deeper. In September, the Walt Disney Company hosted a live, 18-hour marathon of the unboxing of toys and other merchandise tied to this month’s release of the movie “Star Wars: The Force Awakens.” YouTube stars around the world opened products starting in Sydney, Australia, and ending at Lucasfilm in San Francisco.

Brands being brands, many want to exert even more control over the concept. Toys “R” Us created stop-action animations in which toys unbox other toys. The two-minute-plus videos, which started in late October on the company’s YouTube channel, are a centerpiece of its digital advertising campaign for the holidays.

“It was inspired by how kids really play,” said Richard Lennox, the retailer’s chief marketing officer. While they use the unboxing concept, the videos have a more overt promotional feel.

In the first episode, which has gotten more than one million views, two Little People Knights “rescue” a Journey Girls Italy Holiday Doll from her plastic box. “Oh, you come with so many beautiful accessories,” coos one knight.

Toy makers especially are intensifying their embrace of the genre’s stars, in some cases taking the concept into traditional advertising. Last year, Spin Master hired EvanTubeHD for a TV commercial for its Spy Gear toys in addition to YouTube videos. The company attributes a 65 percent jump in Spy Gear sales in 2014 in large part to Evan’s salesmanship. This year, the company created an animated online series around him and his sister, Jillian.

Toys naturally dominate this time of year, but unboxing videos, which began with tech products, are spreading to other brands, including fashion, cars, software and cable TV services.

The New York lingerie company Adore Me, whose customers are largely digital-savvy millennials, has created several television ads since the summer that employed unboxing. Morgan Hermand-Waiche, the company’s chief executive, said the spots produced about 20 percent better results than its other ads, measured by the response rate and sales generated from them.

To meet growing demand from brands, Fullscreen, a network of YouTube creators, has sought to sign up more unboxers, said Kevin McGurn, the company’s head of sales.

Not everyone is thrilled with the rise of the videos, which skirt digital and parental ad blockers. On Nov. 24, the Campaign for a Commercial-Free Childhood and the Center for Digital Democracy filed a second complaint with the Federal Trade Commission about commercially oriented YouTube videos, including unboxing. It followed an initial complaint in April that claimed some sponsored videos violated F.T.C. rules because they were not labeled as such.

The Toys “R” Us videos “are extended commercials that happen to be on YouTube,” said Josh Golin, the executive director of the Campaign for a Commercial-Free Childhood. He is especially concerned that they are aimed at children, who have trouble distinguishing commercial messages from editorial content.

Mr. Lennox said that Toys “R” Us’s videos are not advertising according to YouTube rules and that the company complies with existing law. YouTube said it asked creators to disclose if their videos contained paid product placement and that it excluded those from its YouTube Kids site.

Marketers appear undeterred. Indeed, the bigger challenge may be overkill. “The temptation is to rush in with promotional content and overdo it,” said Carol Spieckerman, president of the strategy firm Spieckerman Retail. If viewers perceive that brands exert too much control over YouTube personalities, she said, that could cast doubt on the authenticity that has made them effective.

For now, though, the videos still work. Ms. Nelson, for one, has bought her son Easter eggs with surprises inside to supplement his fascination with Kinder egg unboxings.

“I’ve caught myself watching the videos and even getting excited,” she said. “It gives me good ideas for birthday and Christmas presents.”