Ad Agency Enlists Comedians to Get the Creative Juices Flowing

THE SCENE was beginning to take shape, a Walter Mitty-like fantasy about a schlub taking out the garbage. A small team was imagining how the mundane task might be suddenly transformed. After briefly considering an action sequence, they landed on a number with a lift straight out of “Dirty Dancing.”

Although it felt more like an improv class at the Upright Citizens Brigade, the setting was a corporate brainstorming session in a Midtown Manhattan loft, and the centerpiece of an unusual approach that one San Francisco agency is hoping will disrupt the industry.

Long hours, tight deadlines and a stream of demanding clients can sometimes make advertising seem deadly serious. But the two-year-old agency Funworks has found a way to inject some humor into the business, joining its clients and copywriters with a team of sketch and improv performers for collaborative workshops that attempt to kick-start the creative process.

Paul Charney, the founder and chief executive of Funworks, said the method gets at what he thinks is a fundamental problem in the industry: how long it takes to produce a campaign and get the client to sign off on it.

“The process hasn’t changed, but people’s expectations have,” said Mr. Charney, who previously was a creative director at Goodby Silverstein & Partners, describing an accelerated business environment where there are more platforms than ever for advertising. “People are frustrated because it takes so long.”

As a longtime sketch comedian — he is a founding member and former artistic director of the San Francisco troupe Killing My Lobster — he knew there was another way. But Mr. Charney did not think to combine the worlds of comedy and advertising until his friend Craig Mangan, who at the time was executive creative director at BBDO San Francisco and has since joined Funworks, suggested that he tap some of his comedian friends.

“It just made so much sense,” Mr. Charney, 42, said. “At the sketch group, we came together collaboratively and came up with ideas faster.”

Initially he did not envision bringing clients into the brainstorming process, long sacrosanct in advertising. But the agency was a start-up, and he discovered that inviting them into the sessions to find out what might resonate saved time and money.

“What happened was it made it better because they had ideas, too, and it got everyone on the same page,” he said.

Funworks has continued to refine its approach. Last year, the agency hired the creativity expert Erica Fortescue to help design the workshops. 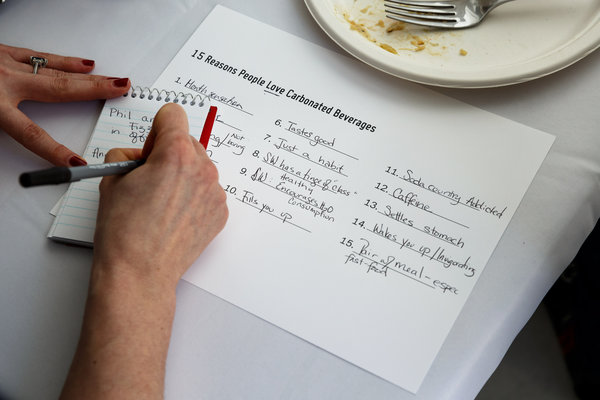 “What we’re trying to do is explicitly connect what we’re doing in the workshops to what good science is recommending we do,” said Ms. Fortescue, who also serves on the faculty of the Center for Childhood Creativity at the Bay Area Discovery Museum in Sausalito, Calif.

At a recent Funworks session in New York for SodaStream, a manufacturer of home carbonation systems, that meant incorporating stimuli like music and movement — at one point, the participants were asked to do the twist — to get the ideas going. A graphic artist kept track, using markers to sketch the suggestions on an oversize pad of paper.

If it all sounds more like fun than work, well, that’s the point.

Teresa Amabile, a professor and director of research at Harvard Business School and a co-author of “The Progress Principle,” researches the role that positive emotions, like those brought about by a good laugh, play in stoking creativity.

When people are in a good mood, she said, “cognition kind of loosens up, helping us to make connections between things that are normally not associated” — the key to coming up with good ideas.

Mr. Mangan, 45, said he had seen firsthand how the comedians, who work for Funworks as freelancers, act as a kind of creative spark, getting clients and copywriters into a “free-flow space.”

Comedians seem to appreciate the experience, too — and the extra money.

“I left my day job to continue writing, which has been very lucrative,” deadpanned Dan Wilbur, a 29-year-old writer and stand-up comic. There was no downside, he added, to an arrangement that asked him to spitball ideas without any pressure.

The workshops are not as freewheeling as they might sound. Kenny White, the head of creative collaboration, works with Ms. Fortescue to lead participants through the tightly structured two-hour sessions, exploring each client’s marketing strategies in a series of carefully planned exercises. Afterward, the Funworks team, including copywriters working on the project, meets with the clients to select the strongest ideas to develop.

The model has helped reveal early on what approaches have the most potential, shaving weeks, if not months, off the process, Funworks said. And because the clients and the creative team come up with ideas together, there’s more support for the end product.

“We’ve sold work that we never could have in the traditional format,” Mr. Charney said. “But because the clients were there, they were able to take a risk.”

Still, the approach can be limiting. Despite reassurances that Funworks does not only do funny, the agency said some clients are put off by the comedic element. But Funworks says it has doubled its business in the last year, with clients ranging from Clorox to Pax, which makes sleek portable vaporizers.

Emma Froelich-Shea, SodaStream’s vice president for marketing for the United States, said Funworks’s approach was what sold her on the agency, even though she was not looking for a humorous campaign.

“This seemed to me to be a fast, creative way to get ideas that would have cultural resonance,” she said. “Comedians think quicker than anyone.”

A version of this article appears in print on April 11, 2016, on page B3 of the New York edition with the headline: An Agency Enlists Comedians to Get the Creative Juices Flowing. Order Reprints| Today’s Paper|Subscribe