Its iconic letters stand among the most successful branding ever

Peg Entwistle had come 3,000 miles just to have her heart broken.

It was 1932, and the promising stage actress from New York had come to Hollywood to break into the movies. But after weeks of auditions, the phone hadn’t rung. That was when a highly distraught Entwistle found herself up behind the Hollywood sign, climbing a maintenance ladder behind the 50-foot letter “H.” And when she reached the top, Entwistle threw herself off.

The tragic story of “The Hollywood Sign Girl” remains a cautionary tale for the thousands who still flock to Tinseltown in hopes of a career in front of the camera. But the subtext—Entwistle’s choice of the sign for, if you will, her final performance—is equally enduring: be it 1932 or 2017, the sign has always been about more than it seems. And as symbol of both place and idea, those big white letters on the hill are among the most successful pieces of branding in the world. 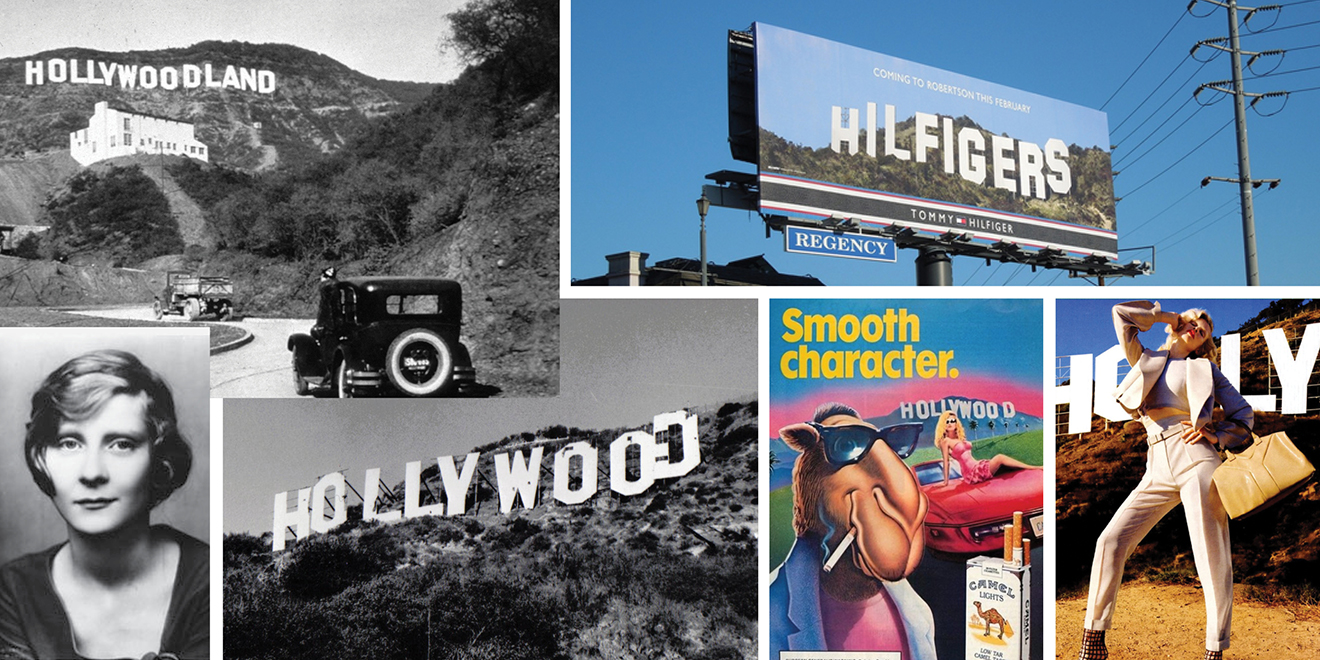 The original 1923 sign (top, left) read “Hollywoodland,” and advertised an exclusive housing development. In 1932, distraught actress Peg Entwistle (inset) threw herself off the letter H. Though the sign was a fixture of the city, by the 1970s it had fallen into serious disrepair (above), necessitating an extensive restoration. An immediate signifier of the Hollywood brand, the sign has long played a central role in advertising, from Joe Camel in 1988 to Claudia Schiffer sporting YSL in 2009 (bottom, right), to this 2013 ad for Tommy Hilfiger (top, right). Even with its letters swapped out, the landmark is still instantly recognizable.
Hollywoodland: Getty Images

“It’s the most identifiable tourist attraction in Southern California,” said Hollywood Sign Trust chairman Chris Baumgart, though its meaning extends to those who’ve never been to Southern California. “It represents making it in this business,” he added, “those dreams put on screens large and small around the world.”

The sign didn’t start out this way. In 1923, seeking to capitalize on Hollywood’s identity as the headquarters for the burgeoning film industry, Los Angeles Times publisher Harry Chandler invested in a 500-acre housing subdivision called Hollywoodland. Not content merely to advertise his tract houses in the newspaper, Chandler dropped $21,000 to erect an epic sign in Griffith Park. Originally meant to exist for just 18 months, the sign almost immediately transcended its purpose, symbolizing the city as well as its larger-than-life spectacles. 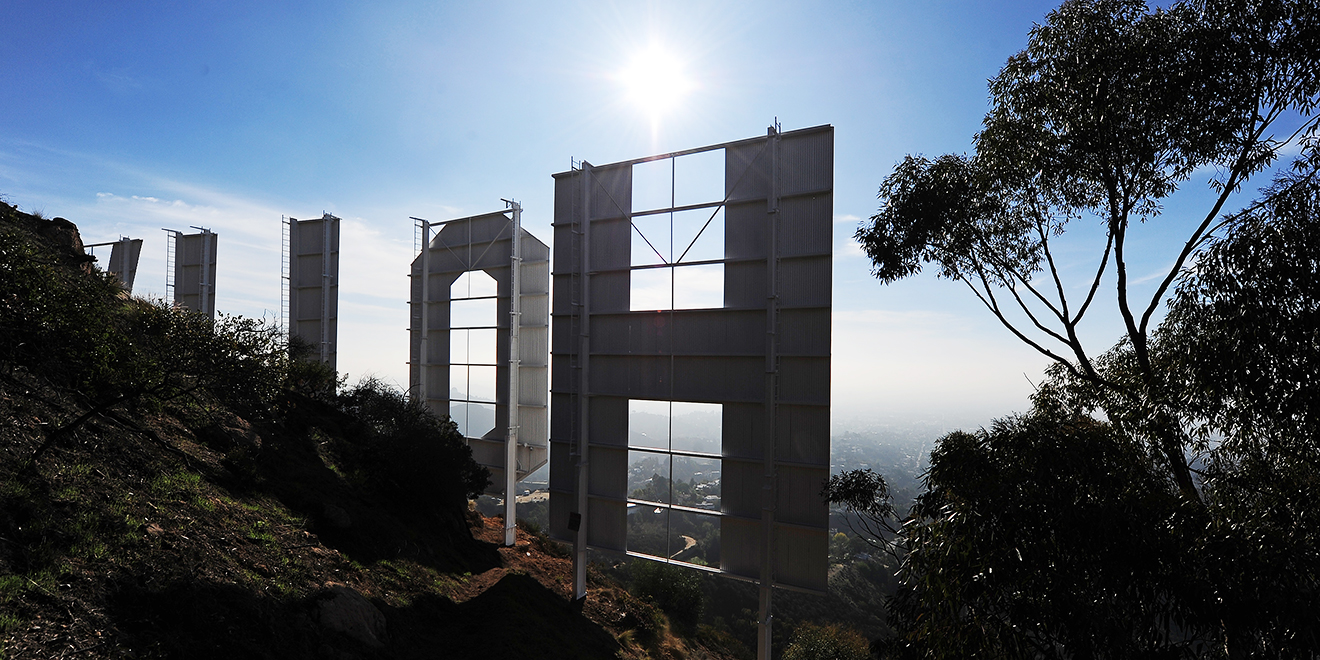 The H: It fell flat on its face in 1949 and nearly signaled the end, but its collapse started a movement to repair and preserve the sign for future generations. The Hill: For all its glamour, the sign is really just a billboard, and its prominence stems in large part from location: 1,709-foot Mount Lee above L.A. The Material: The 45-foot-tall letters are made of large pieces of sheet steel. Sherwin-Williams donated the 255 gallons of white paint it took to cover it all.
Robyn Beck/AFP/Getty Images

Unlike most Hollywood movies, however, the sign never enjoyed any funding. The letters decayed over the years and, by 1949, the “H” toppled down the hill. The city moved to demolish the sign that year, but a popular outcry prompted the local chamber of commerce to step in and right things, removing the “-land” suffix and repairing and repainting the shortened name of “Hollywood.” 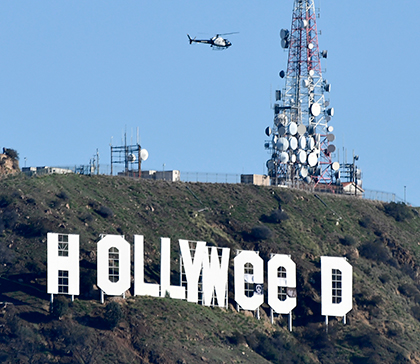 A famous symbol, the sign is always a target for pranksters, who’ve pimped the letters to read JOLLYWOOD, FOX, HOLYWOOD (for a papal visit), GONAVY, OILWAR, CALTECH, RAFFEYSOD (the name of a band, apparently) and HOLLYWEED, which has happened more than once.
Getty Images

These days, the sign enjoys landmark protection and a budget for upkeep by the sign trust. Fittingly, the money for the upkeep of this masterful piece of marketing comes from more marketing. The sign is licensed for use on everything from T-shirts to shot glasses to ad campaigns for fashion brands—deals that generate six figures a year.

In fact, the sign’s only troubles today are all the tourists who break the law to try to reach it, a metaphor that’s not lost on Baumgart. The sign, he said, “is about dreams. And people want to touch the dream—[to]get close to Hollywood, the actors and movies, the fantasies. But it’s always out of reach. The sign is out of reach—just like Hollywood.”

Robert Klara is a senior editor for Adweek, where he specializes in covering the evolution and impact of brands. A writer and editor with the magazine since 2006, Robert is also the author of two nonfiction books: "FDR's Funeral Train: A Betrayed Widow, a Soviet Spy, and a Presidency in the Balance" and "The Hidden White House: Harry Truman and the Reconstruction of America's Most Famous Residence."