The Rio Olympics have come to an end after weeks of organizational challenges, health-related concerns, and, of course, stunning displays of athletic prowess. So it’s time to take a look at how some of the major sponsor brands measured up on the world’s largest international stage.

It did it again! There is no Christmas (or Olympics) without a major outburst from the world’s most famous soft drink company. This time it managed to have tremendous visibility all over Rio, which included placing limited-edition golden cans in-market that were literally everywhere we looked. For its prominent and intelligent brand integrations, I’m calling Coke’s campaign for Rio a strong success.

The use of a torch relay throughout Brazil to introduce the new Nissan Kicks SUV might well give Nissan its first-ever model to achieve supersales in Brazil. In addition, it managed to brilliantly activate its new sponsorship deal with the Olympics, using an all-Nissan Olympic mobility fleet—complete with a beautiful Rio 2016 livery—to captivate audiences and catch attention. My takeaway with Nissan? A job well done.

Probably the brand that started its advertising earliest for the Olympics, Samsung’s sponsorship at the games seemed to fade away once the events actually started. It not only pushed out a campaign with very confusing messaging—#DoWhatYouCant—but it also missed out on the opportunity to showcase its prowess in the Olympic park; one big screen simply isn’t enough. With all the competitions going on and opportunities for branding, Samsung should have taken better advantage of its sponsorship.

Arguably one of the most controversial sponsors at this year’s Olympics, Visa’s position as the exclusive credit card payment method created much dissent. Though it had a similar activation with ticketing at the World Cup, Visa went a step further at Rio, limiting the credit cards that could be used inside the Olympic venues, where in most cases cash wasn’t even permitted. Is forcing people to use Visa—or else letting them go hungry or thirsty—really the best way to promote the brand? I would argue that for this type of sponsorship, Visa should have offered consumers some sort of benefit or advantage in exchange for its use, and it might have seen a very different response. 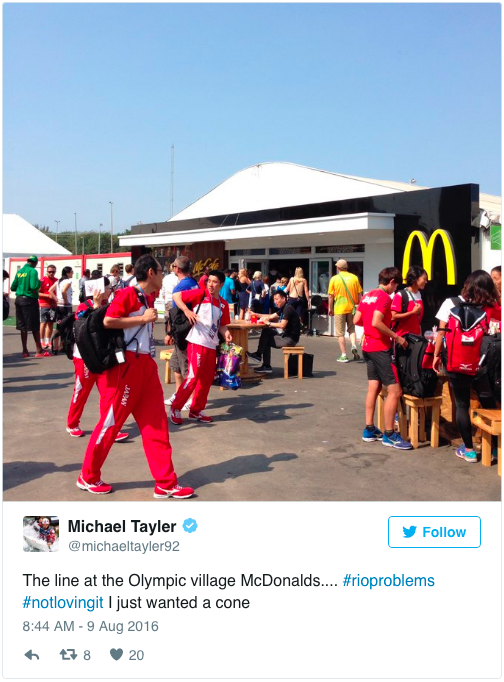 According to myriad media sources, McDonald’s was far and away the most visited restaurant in the athlete’s village—but no one but athletes (and coaches or trainers) could get there. With the less-than-amazing food and drink options available at the Olympic venues, it would have been incredible to have any kind of pop-up McDonald’s around to help quench the appetites of the masses. Alas, it was a big McMissed opportunity for Mickey D’s.

This article first appeared in www.landor.com