According to the In-House Agency Forum (IHAF) and Forrester Research, who co-fielded the new study, “State of In-House Agencies,” a whopping 64% of corporate America have in-house agencies today. Just ten years ago that number was 42%.

But according to the study the motivation behind bringing advertising work in-house has shifted from cost efficiencies and quicker turnarounds to brand and business acumen. I believe this shift indicates that the tipping point has been reached. The experiment is over. In-house agencies are not only the norm today, they are fast becoming the epicenter of all marketing.

With new and different opportunities for traditional agencies to evolve and stay relevant. 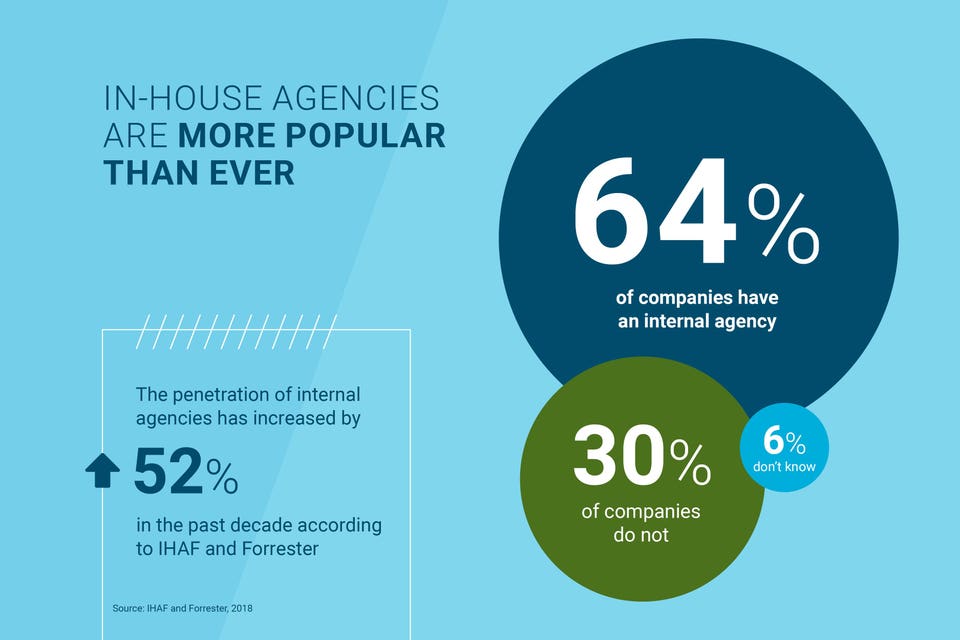 We – the collective we – were losing millions, if not billions, in revenue as a result of this shift. But it was hard to argue against it considering clients were saving gobs of money going in-house versus what we – the collective we – could offer. Particularly when it came to the retail and collateral work that traditional agencies weren’t all that good at, nor truly had passion for in the first place.

So my next question is this: have the kinds of work that in-house agencies are doing changed? Was it still primarily below-the-line, hard-core retail print work? The study had some answers. 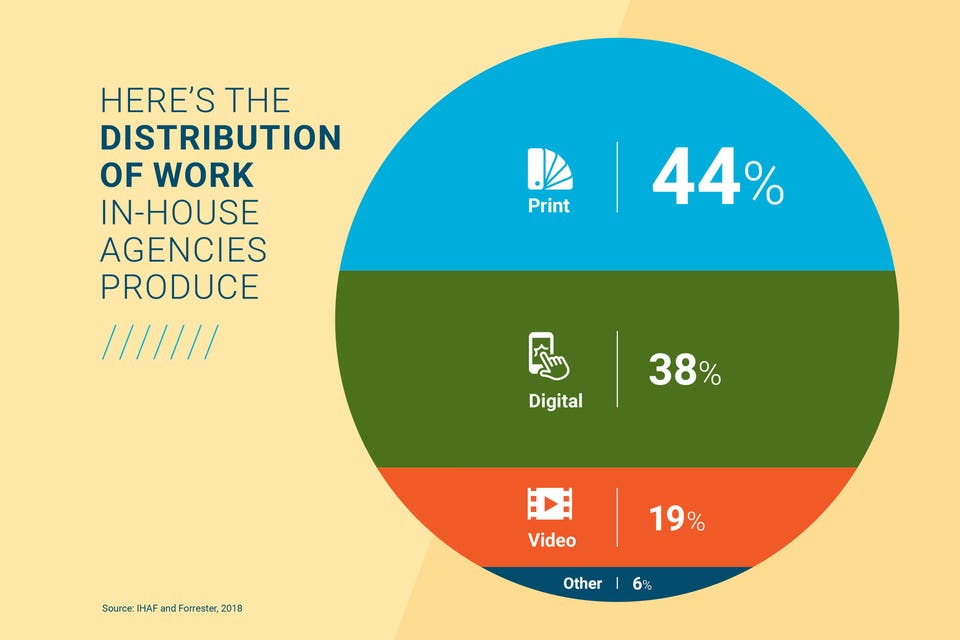 Curious, I asked IHAF for historical video numbers and the trend is confirmed. In 2011, Video was lumped in with “Other” at 8%, while Print was a more robust 53% (no surprise) and Digital relatively unchanged at 39%. Considering the chart above still has “Other” at 6% and Video now pulled out at 12%, we can at least conclude that the Video number has shot up dramatically since 2011.

The 38/39% digital numbers make sense as digital is inherently real-time and requires less bureaucracy in order to be effective, particularly in social media. Just so much content.

To that point, I asked a client of mine with deep in-house agency capabilities, Darren Feeney, the VP of Advertising & Communications at Titleist, to comment and he said,

While there are many great things about outside agency work, when it comes to turnaround times and cost for our video content, we are so much more efficient with our in-house team. Perhaps more importantly, as the need for more and more content has continued to grow, we’ve been staffing up our in-house teams to deliver on the demand.

Which suggests to me that traditional agencies just can’t keep up with the changing marketing landscape.

The IHAF/Forrester study went deeper on this issue and uncovered the perceived advantages and disadvantages of in-house agencies, overall. 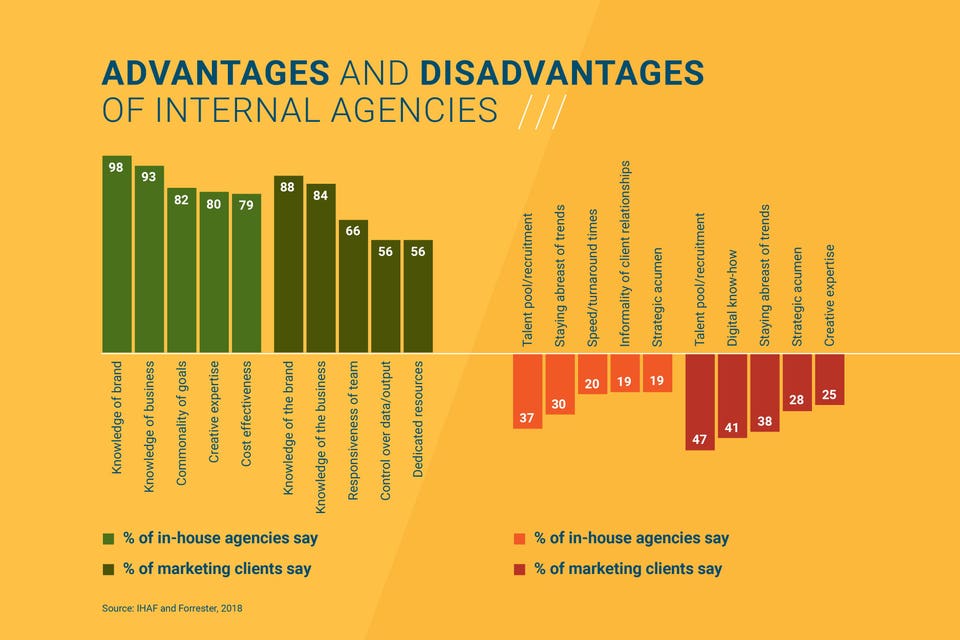 Back in 2013, I speculated this would happen in my, “In-House Agencies Have An In.” In it I wrote,

…communications coming from people who actually work at the company is purer. Who better to understand the mysterious concept of “brand” than those working inside its walls, immersed in its culture, even running into all of its “rational and emotional” components at lunch every day?

Perhaps that dynamic of “brand purity” explains the business acumen numbers in the No. 1 and No. 2 positions. It just makes sense. People working at the company are always going to understand the brand’s essence better than outside agencies.

But it gets worse for outside agencies. Look at the No. 3 position, “Commonality of goals,” and what that tells us. To me, that’s a reflection of the classic client/agency problem. They’re not on the same page or, worse, have competing agendas. Clients want to sell more product while agencies want to sell more agency. Meaning, agencies want to do great work for client X so they can land client Y. That means the work for client X must break through, win awards and somehow provide distinction for the agency.

Sometimes these agendas line up, but sometimes they don’t, forcing clients to look for other options.

Now, if we look again at the chart above at the perceived deficiencies of in-house agencies (right hand side in red/orange) we might just see how the future will unfold.

Concerns with in-house agencies are opportunities for outside agencies.

Let’s see, the top issues are (using in-house agency responses, which generally reflect those of the marketing clients):

I left out “Speed/turnaround time” because that will always be an issue no matter what. An agency can always be faster and cheaper.

But look at the other four. Every one of those are opportunities for individual outside agencies, but also indicators as to what kind of single outside resource “traditional agencies” may want to become.

For this 64%, they don’t want to hear that you can “do it all,” or the too-often used, “all under one roof.” It’s about complementing what the in-house agency already has. It’s about helping them stay on top of trends, which is directly related to providing robust strategic chops. 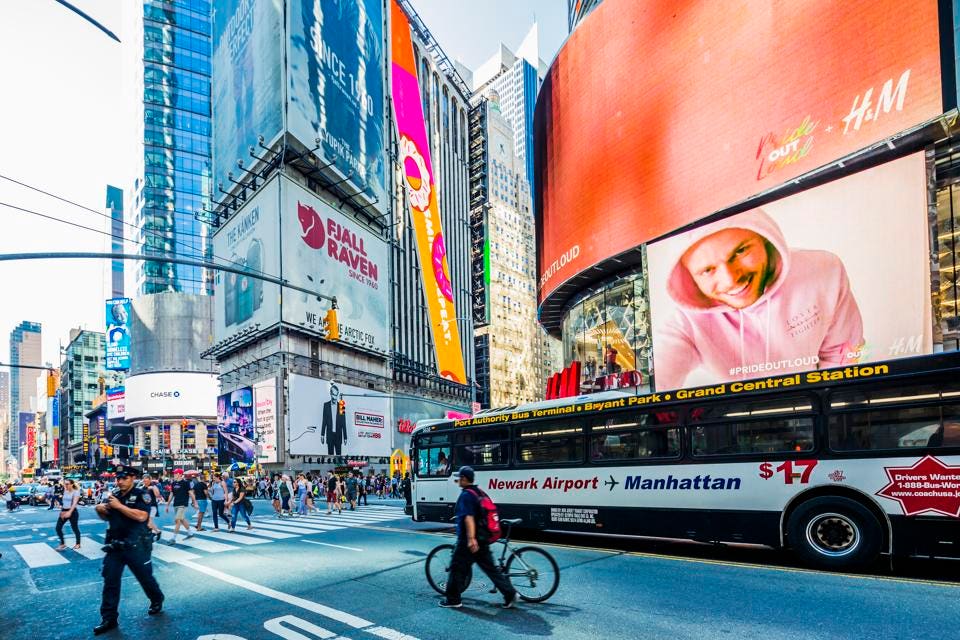 Even the “Informality of client relationships” issue, which to me suggests that in-house agency creatives get a little too chummy with their marketing clients and, therefore, are less able to persuade (intimidate?) them to be bold creatively.

And to the issue, “Talent pool/recruitment,” I’d say there’s a paranoia about having the best talent at any given in-house agency. But that’s an opportunity for outside agencies, too. I’ve personally found that outside agencies can still be quite handy providing creative ideas, outside perspective and project-oriented support on an as-needed basis. In the future, I believe outside agencies will need to allow in-house agencies to remain in control of the brand (they have the inside knowledge), while providing much-needed support.

Insular thinking is the enemy of in-house agencies. It’s very easy for them to get caught in creative ruts and just do what they’ve always done. So while that 64% goes up to 70% on up to 95% and in-house agencies become more the norm, I believe in-house agencies will always need outside agency support.

Just not with the same fat retainers and overhead.

To get even more in the weeds on this research report than I did, click here.

Will Burns is an advertising veteran and current CEO of Ideasicle.com.