Different generations engage with mobile advertisements in very different ways, according to recent research from Nielsen.

The report was based on data from a 2Q16 survey of 8,000 consumers in the United States.

Some 55% of Generation Z and 48% of Millennial respondents say they are willing to click on a mobile ad if given the right mix of branding, convenience, and promotional offering.

However, most Generation X, Baby Boomer, and Greatest Generation consumers say they will not click on a mobile ad no matter what the content.

Some 19% of Millennial, 17% of Generation X, and 14% of Baby Boomer respondents say  viewing an ad with a coupon or promotion is the thing that would motivate them most to click on a mobile unit.

For Generation Z, the top motivator is an ad from a familiar brand. 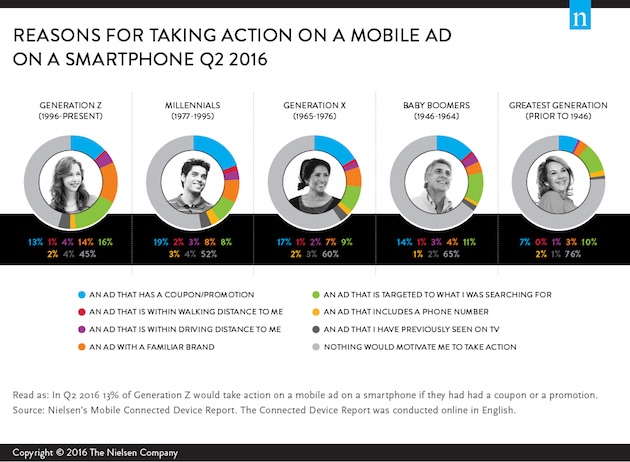 About the research: The report was based on data from a 2Q16 survey of 8,000 consumers in the United States.