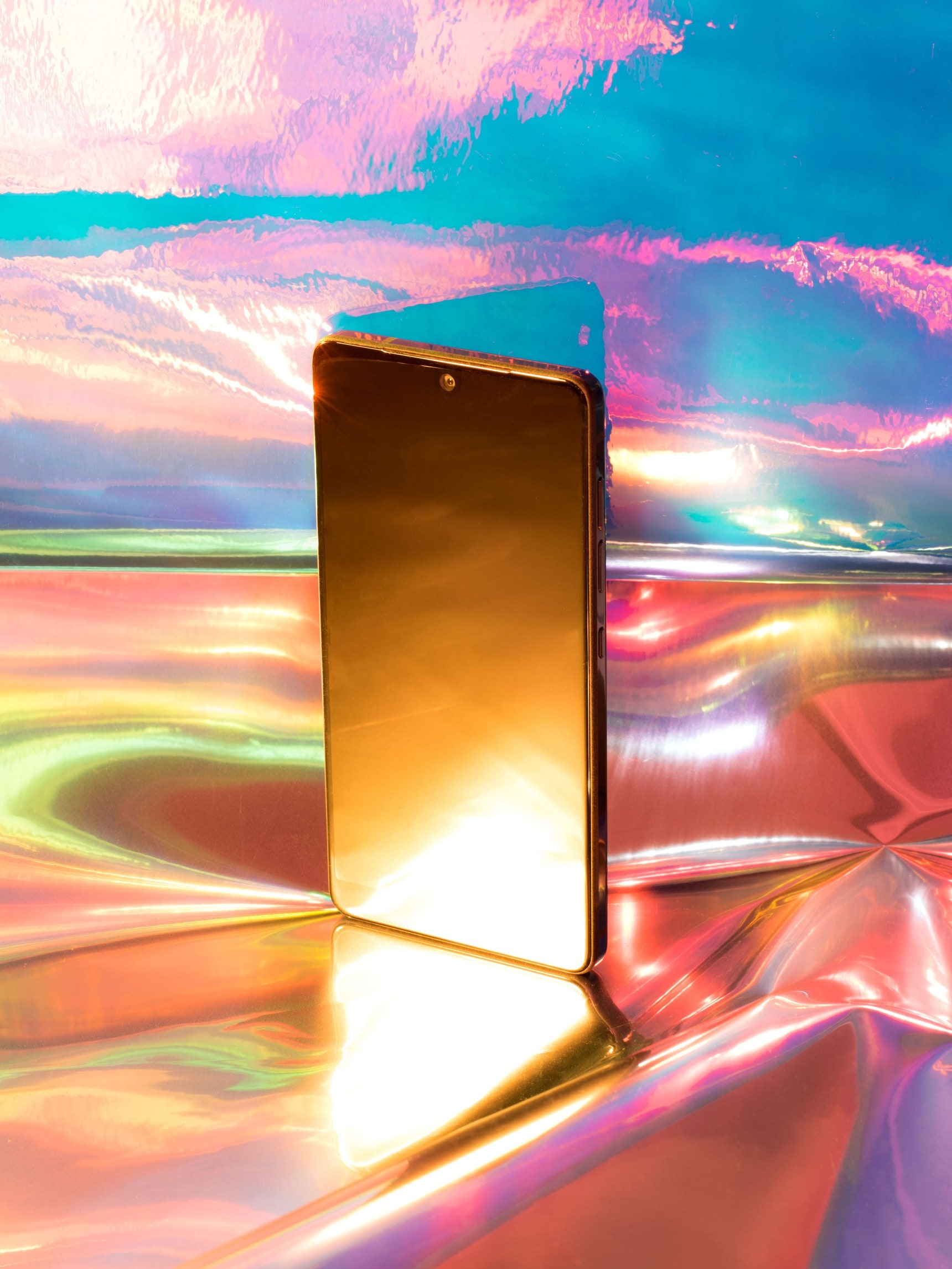 WHEN I MET Andy Rubin, the founder of Android, earlier this year to talk about his new company, he showed me a PowerPoint deck from 2009. His team put it together just before the debut of the Motorola Droid, Android’s first real chance to take on the iPhone. The campaign slogan was “Droid Does,” and Motorola planned to harp on all the things the iPhone couldn’t do. It crowed about multitasking, “real keyboards,” and interchangeable batteries. And it worked: The Droid was a smash hit, in large part because it was everything the iPhone wasn’t.

With his new company, Essential, and his new phone, the Essential Phone (the PH-1, but we’re not calling it that), Rubin’s playing the same game. But the iPhone has changed. The way Rubin sees it, people don’t like that it’s a walled garden with little room to customize or experiment. Or that it’s everywhere, the same phone your grandma and your accountant carry. Or that it is, well, boring.

The Essential Phone ships September 1, starting at $699. You can buy it subsidized from Sprint, or unlocked from Amazon and elsewhere. (You should buy it unlocked.) It is the first in a line of products that Essential believes will bring innovation back to the smartphone market and give people a brand to love in the same way millions love Apple.

In some ways, the Essential Phone appears genuinely exciting and new. In most, it just feels like a really good smartphone. And in a few frustrating ways, it’s not yet good enough.

You learn a lot about the Essential Phone merely by picking it up. This sharp-edged, slippery slab of titanium and ceramic conveys power, all tool and no toy. It has no camera bumps, no branding. The black one (it also comes in white) feels like a prop in a Tom Cruise movie in which he stops mid-call, flings his phone at approaching enemies, incapacitates them all, then pulls his phone from the pile of bodies and resumes the conversation. Maybe with a quip like “Thanks for holding,” dramatic pause, “my phone was busy.”

All of which is to say I love how this phone feels. I wish it were a little lighter in my pocket, and not quite so slippery or prone to fingerprints. It’s also not as tough as it looks. Yes, that titanium body won’t ding or scratch the way aluminum or plastic do. But the Essential Phone isn’t waterproof, which I consider an absolutely necessary feature on a great phone these days, nor is it impervious to destruction like the Moto Z’s Shattershield screen. In a show of confidence of the phone’s strength, the company doesn’t offer a case. Still, it won’t quantify the phone’s ruggedness, because if you drop it, you might just break it.

The screen, though, is everything a phone screen should be. The 5.71-inch, 2560×1312 display renders everything crisply and clearly, and with barely any bezel beyond the bit at the bottom, the phone feels much smaller than, say, an iPhone 7 Plus. Full-screen movies and games look fantastic, even if the odd aspect ratio means your 16:9 video won’t quite fill the screen. And that tiny notch at the top, around the camera? I couldn’t stop looking at it for about an hour, then promptly stopped noticing. I like it more than what I’ve seen in renderings of the next iPhone, and I’d rather have it than the wonky camera placement in something like the Xiaomi Mi Mix. Until manufacturers figure out how to remove the camera notch altogether, this feels like the best answer.

The only downside of this gloriously full screen lies in the software. More often than not, Android slaps a black border at the top of the phone above whatever app you’re using, which kind of kills the effect. In a few places, content can flow all the way up, giving you more maps or an even wider-angle Netflix, but you’d often never know you didn’t have a bezel. As more phones get smaller bezels, this will change, but the full effect of the full screen hasn’t quite arrived.

Part of Essential’s brand holds that people want a phone that feels like their phone, that doesn’t scream brand allegiances or look like every other phone. I want to sneer at the high-mindedness of it all, but I get it. I like having a phone with no logos, no fine print, no camera bumps. Especially when otherwise, it’s about as powerful as you’d want. There’s just one model, with a Snapdragon 835 processor (great), 4 gigs of RAM (meh), 128 gigs of storage (great), a 3040mAh battery (pretty good), and no headphone jack (all the feels, especially since there are no headphones in the box). The battery lasts all day, and even occasionally through the night. The included USB-C charger, which features a nice braided cable, works its magic quickly.

Here’s where I land on the hardware: I really like it. It doesn’t look wildly futuristic like the Samsung Galaxy S8, which boasts an even better display, waterproofing, and a super-slim body. But the Essential is less fragile, it doesn’t have a million logos or a hard drive full of bloatware, and you can actually use the fingerprint reader. As a pure object, I much prefer it to the S8 or Google’s Pixel. I haven’t liked the feel of a phone this much since the glory days of the iPhone 5. But unfortunately, it’s not all such good news.

Snap On, Snap Off

Essential’s camera specs meet your expectations for a high-end phone, but the photos don’t. The two 13-megapixel cameras on the back—one in color and one in monochrome, used mostly to bring additional clarity and depth data in your photos—occasionally take beautiful, rich photos. They also, for no apparent reason, occasionally capture well-lit, noisy, poorly focused shots. I like the slightly saturated look of the photos; I don’t like that they collapse into pixelated blobs as soon as I zoom in. At least the 8-megapixel selfies come out better.

The most fun I had with the Essential Phone’s camera was shooting in Mono mode. Since it’s not just rendering your color-captured photo in black and white, but actually capturing in monochrome, this camera offers a slightly different, more nuanced take on a lot of photos. I got sharper images from this camera alone than the two of them together, and they add an awesome film noir-y look to my Golden Gate Bridge shots. I could almost get away with pretending it’s a Leica on Instagram. Almost.

Like most new phone manufacturers, Essential has some tweaking to do with the camera. Ditto the app, which is easy to use but way underpowered. I don’t like the cartoon-y camera icon, or how few options and settings the app offers—you can shoot in Auto, in Mono, and in slow-mo, and that’s it. I don’t like how absurdly slow the shutter can be, or that you can’t do the 50-shot burst of photos to make sure you get a good one.

Essential’s most interesting ideas about cameras concern the two magnetic ports on the back of the Phone. They form a magnetic accessory port, onto which you can, in theory, stick anything. In practice, you can add the 360-degree camera attachment.

Beyond the camera app, the only software on the Essential Phone is Android. Pure, clean, bloatware-free Android. If you buy from Sprint, you’ll get a couple of pre-loaded apps, but the unlocked version works on every carrier and has none of that grossness.

One of a Million

It’s hard out there for an Android phone. You’ve got Samsung and Huawei selling phones at impossible volumes, while Xiaomi, HTC, Motorola, Google, Oppo, OnePlus, LG, and 1,000 other companies seek a niche. Cheap phones are awesome; expensive phones are incredible. All smartphones do everything now. Essential’s hope is to be the non-brand, the phone that gives users the sense of choice and ownership they’ve been missing. Will it work? Andy Rubin and Essential have roughly $300 million to spend trying to find out. But it’s a tall order.

I buy the notion that an excellent phone could capture the hearts of people who don’t want Apple’s brand or Samsung’s software mess. And the Essential Phone is almost that phone. It gets so many things right. If this big ol’ metal slab were waterproof, and if I trusted the camera a bit more, I’d happily place it in range of the S8 and Pixel as the best Android phones out there. But it has just enough imperfections to give me pause, and as with any new company, how Essential handles things like updates and customer service will prove crucial.

There’s absolutely room for a phone that doesn’t shove its manufacturer and advertising partners in your face. If you buy this phone, I think you’ll appreciate that about it. You’ll also realize that Essential, like everyone else, is still working out how to truly change the smartphone game.

David is a senior staff writer at WIRED, covering personal technology. He owns all the phones.