My dining room may never be the same. The Ikea table and vintage fiberglass chairs have been pushed aside. The perimeter is traced with dangling cords, precariously connecting a constellation of hastily tape-mounted laser trackers. A glowing PC is the room’s new focal point. My toddler is unsettled by the alien’s neon eyes.

But it’s all worth it, to carve out a patch of open land in my cramped condo where I can put on the HTC Vive, grab two motion controllers, and experience the most advanced incarnation of virtual reality on the market today. Six years after the iPad came out, we’re still debating whether or not you can actually make things with it. But I hand the app Tilt Brush—imagine Microsoft Paint in 3-D space—to my wife for the first time. And within minutes, she’s crafted a flowing, rainbow dress in midair.

I know, this sounds totally insufferable. But you—casual, budding, or established designer—should do whatever you have to do to try an HTC Vive, too. Because it’s not actually flying around in space or watching whales at the bottom of the ocean that makes VR incredible. It’s that in this second reality, digital experiences don’t just seem physical—they feel physical. The fourth wall of your monitor is gone.

Inside this space, creating content is as exciting as consuming it. And design will never be the same because of that. Here’s why.

The sensation of creating in virtual reality is nothing short of godlike the first time you try it. Of course, it doesn’t hurt that you can literally draw in glowing light, burning fire, or shimmering stars. But it’s gutturally remarkable because you can walk around the room, viewing these creations from any angle—even crouching down or moving your nose just inches away—and your mind accepts them as real. Or, real enough.

You’ll never actually forget that there’s a 1.2 lb pair of goggles on your head, nor will you be able to ignore the omnipresent pixels that rewind graphics fidelity to about a decade into the past. Yet as I step through different spaces, from a N.Y.C. subway car to an Ikea kitchen to a warlock’s den (look, VR is early, and my choices are limited, okay?), my gut believes that I can bump into the pole, or the waist-high tables in front of me. 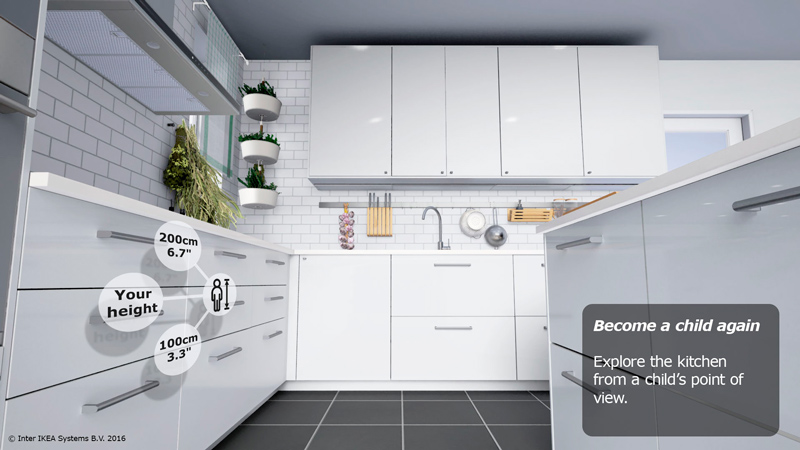 And so I find myself sometimes inching my steps or sucking in my tummy to navigate a virtual space. At one point, I force myself to walk into the sink of my Ikea kitchen, just to remind myself that I can. My heart dropped for a moment, but I lived.

Your mind knows virtual reality is fake, but your limbic system isn’t so sure. And when you combine that phenomenon with how good creation feels in virtual reality, design gets interesting, fast.

The sensation of drawing in all dimensions is instantly addictive. It’s kind of like 3-D printing with your mind. It takes just a thought in your head and a swirl of your arm, and a sculpture manifests from nothing.

A filmmaker named Isaac Cohen recently shared his work with me. He said that since he started working in VR, he’d become interested in strange, experimental spaces, rather than narratives. He began experimenting, creating shimmering tubes and iridescent yurt-like installations. It wasn’t until he talked to an architect he knew that he learned he’d stumbled onto the rich tradition of “liminal spaces,” which perfectly described the transitionary, ritualistic, and otherworldly rooms he was intuitively designing.

Cohen’s architectural experiments are just one example of how VR makes a broader range of creative mediums attainable to users. He tells me how his friends have consulted a fencing instructor to master Fruit Ninja slicing techniques, and painters to improve their mock-ups of industrial design. It makes sense though, doesn’t it? Lower the barrier on building a wall, and anyone can be an architect. Give someone the ability to paint in light, and they can be Picasso.

We’ve seen this effect on a smaller scale over the past decade; for example, desktop and mobile video editing software allows anyone to edit and upload their work to YouTube. But VR puts this phenomenon in real space. Skills that would normally take years to develop, and tools that would only be accessible to professionals, are immediately available and completely immersive. Anyone can be a Renaissance man.

A recent VR video by Pencils of Promise—a nonprofit that raises money for international schools—placed donors right into the desk of an African school. In first person, it’s a surprisingly powerful experience. You can almost feel the heat off the mud brick walls, and what it must be like to sit through class as a bored grade schooler in that village.

Now imagine if you could pause that moment and change something in the scene to improve the experience: You could add a window to see how it increased light. You could craft a taller chair that allowed the back row students to see over the kids in the front of the room. Or maybe, if you were really ambitious, you could simulate running an iPhone loaded with your startup’s latest app in that space.

When designers can travel anywhere and be anyone, design changes forever. No longer will creatives be forced to mock up some new invention in a Bay Area cubicle before taking 10 hours to build it in a 3-D printer. They’ll sit on the ground in Africa, or the bottom of the ocean, or the N.Y.C. subway car, and use a magical paintbrush to paint the reality they can otherwise only imagine.

So despite all the cords, I’m going to take a few days before moving my dining room table back, feng shui be damned.