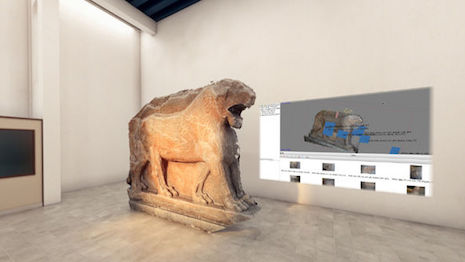 The Economist, after widely broadcasting its dedication to fact-based analysis in the aftermath of the election, is moving towards channeling its hard-hitting journalism through a partnership with a global virtual reality network.

The renowned magazine is expanding its Read, Watch, Listen network through a distribution partnership with Littlstar, a VR network that counts among its properties presences on apps for Sony Playstation VR; all VR headsets such as the Oculus Rift; Apple TV and Littlstar apps for Andoid and iOS devices. The partnership will expand the reach of The Economist’s coverage during what is shaping up to be a watershed period for the magazine’s media arm.
“The strategy is really about growing audience for The Economist in whichever way the audience wants to experience our content,” said Lydia Kaldas, senior vice president of strategy and channel relationships at The Economist. “So in addition to distribution of our VR films, we also are on Snapchat Discover, showcase our articles through Apple News and Facebook instant articles, and users can watch our Films on all over-the-top platforms.
“This is a way for our audience to sample our content; we’ll continue to join platforms that seem like a good fit, and that work, and we’re always looking to stop things that don’t. The important thing is to allow our audience to consume our content wherever and however they choose to.”

The network is an innovative content distribution strategy that allows The Economist to reach and expand its audience through distribution partnerships. At the core of the strategy is the recognition that audiences interact with brands and consume content through a variety of platforms and that as a publisher, The Economist believes it important to adapt its journalism to existing and emerging platforms.

The distribution deal comes on the heels of another shrewd marketing maneuver from the magazine: an out-of-home campaign offering granular selections of The Economist content through New York’s MTA On-the-Go digital network (see story). Both radical initiatives are in service to an equally radical goal of doubling The Economist’s circulation profits within five years.
The Economist’s VR expansion also comes at a time where many other newsrooms are rolling out dedicated VR cohorts within their newsrooms, with such eminent publications as The Wall Street Journal and The New York Times participating; the latter has even gone so far as to establish produce a 360-video every day under the banner of its The Daily 360 (see story).

“I think it’s still too early to say (on VR’s role in reportage),” said Tom Standage, deputy editor of The Economist. “It’s clearly very early days for VR, both as a storytelling medium and as a technology.
“The ability to immerse the viewer in a completely different environment has immense potential, but like other news organisations we are still finding our way,” he said. “We have not yet established a permanent VR team, nor have we committed to regular publishing of new VR pieces.
“We released three VR pieces during 2016 (including RecoVR: Mosul, which has won several awards), and expect to release more in 2017. But I would say we are still very much at an experimental stage as we wait for standards and technologies to mature, and storytelling conventions (let alone business models) to emerge.”