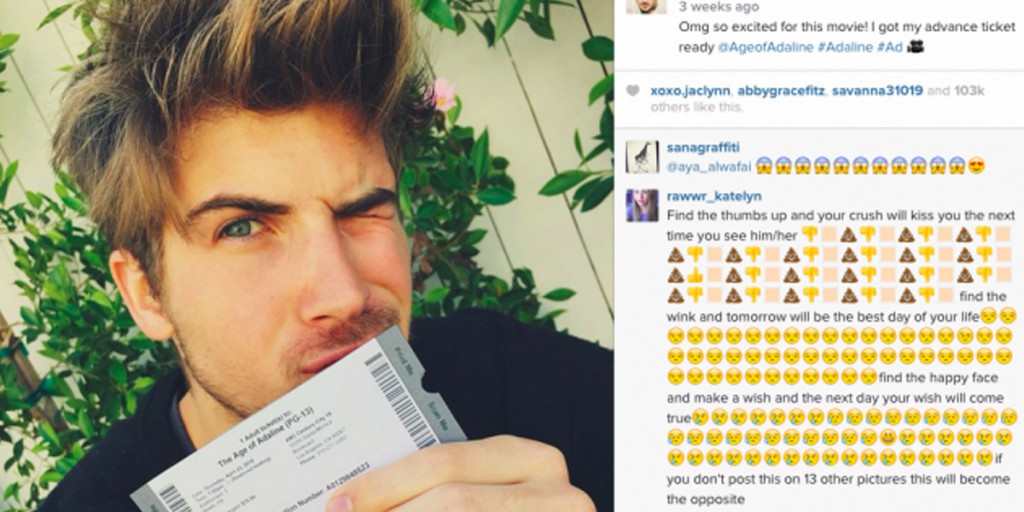 Joey Graceffa’s branded post for ‘Age of Adaline’ got 103,000 likes, but how many impressions?

Brands on Instagram can’t bank on people liking, sharing or commenting on their posts as a way to getthose posts in front of more people, including people who may have missed the original post. There’s no algorithm to resurface old-yet-popular posts. Instagram is not Facebook; it’s Twitter without the retweet ripple effect.

The average photo or video posted to Instagram by a brand reaches 25% to 35% of the brand’s followers, said360i‘s VP of social media Matt Wurst.

To get in front of more eyeballs, brands have two options. They can buy ads to to push those posts in front of more people. Or they can pay so-called “influencers” — Instagram users who have amassed large followings — to post photos to their own accounts on a brand’s behalf.

There are pros and cons to each approach. Instagram ads are an easy, if expensive, way to reach a lot of the 300 million-plus people who check out the Facebook-owned photo-sharing app each month and measure how many people actually saw the brands’ post. But it can be an inelegant solution considering the brands are basically forcing themselves in front of people.

Influencer-created branded posts can be cheaper and more likely to resonate with the intended audience. But brands — which can measure impressions for their own paid and organic posts if they become Instagram advertisers — currently have no way of knowing how many people actually saw an influencer’s branded post.

“It speaks to how the viewability issue is working its way through social and mobile. Most of the time when we talk about viewability and standards, we’re talking about display and desktop. But when you look at a platform like Instagram, there are still pretty big viewability questions that are wide open,” said MEC’s head of social for North America Noah Mallin.

The average Instagram influencer-created branded post reaches about 70% of the influencer’s followers, according to estimates from Instagram brand-influencer matchmaker theAmplify. That figure is based on the more than 1,500 branded posts the firm has facilitated over the last 15 months between brands and influencers like Joey Graceffa who has 2.1 million followers on Instagram.

TheAmplify’s estimate is far from conclusive. No third-party company is able to access Instagram impression counts, so theAmplify did some back-of-the-envelope math to gauge what share of an influencer’s followers likely see a branded post. It’s “a best-guess assumption of viewability” based on factors like engagement rates and whether someone who follows an influencer on Instagram performed some activity on Instagram. That could include favoriting a photo on the same day that influencer posted a branded photo, said theAmplify’s CEO Justin Rezvani, who noted that his company charges advertisers based on estimated impressions.

While far from conclusive, theAmplify’s estimate is as good of a guess as marketers have of how many people see their influencer-created branded posts. “Right now [advertisers]are still looking at [Instagram] followers as a proxy for actual potential reach, because there haven’t been better figures to use,” Mr. Mallin said.

But for all the talk around ad viewability, agency execs say being blind to these branded posts’ impression counts has yet to become a big deal to clients. Mr. Mallin said Instagram is “a compelling enough platform right now from a creative and reach standpoint that [brands]want to be on it.”

Laundry Service also manages its own influencer network and negotiates influencer campaigns for clients based on engagement rates, said CEO Jason Stein, adding that the average price is around $1 per engagement, such as a favorite or comment.

“If reach is important, an Instagram ad buy is the best thing you can do from a brand recall and brand reach basis. Then you can supplement it with an influencer campaign. … All of our big influencer campaigns are around the ad buy,” Mr. Stein said.

Maybe that’s how Instagram — which has no plans to release impression rates for influencers’ branded posts and doesn’t make any money from those deals — would like to keep things.

Tim Peterson covers digital media for Advertising Age out of the publication’s San Francisco bureau. He previously reported on social media and ad tech for Adweek and worked as a reporter handling the digital marketing beat at Direct Marketing News.