A NEW WAVE OF AIRCRAFT DESIGN IS EMERGING—AND NASA IS HELPING.

It’s probably been a long time since flying amazed you. Air travel tends to feel like an inconvenience these days—not a miracle of engineering. This is partially due to market forces and security theater. It’s also the fact that aircraft design itself hasn’t changed dramatically in decades.

But for the past six years, 130 NASA employees have been hard at work on a laundry list of new airplane technologies that could change how planes are designed. The program is called ERA, or Environmentally Responsible Aviation, and its mission is to dramatically reduce air travel’s environmental footprint by slashing plane emissions by 75% and reducing the fuel they consume by half. Another goal? To drastically cut down noise pollution, the primary impediment to expanding or building new airports. Oh, and push a list of emerging technologies, each designed to accomplish these goals, into the mainstream fleet. By 2025. 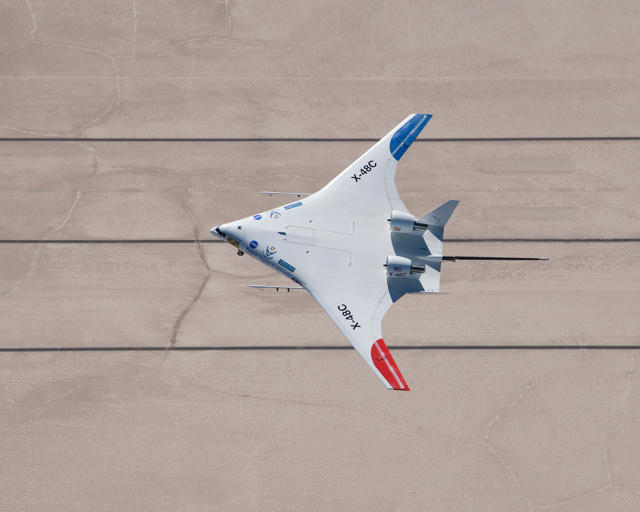 The process of moving a design innovation from a computer screen to a jetliner is incredibly complicated. NASA goes through a long testing process before even making scale models to test in wind tunnels. Next comes exhaustive real-world testing, often on the bed of a retrofitted plane. Even after NASA has “released” a technology, it still takes years for plane manufacturers to adopt it—if they adopt it all.

So while ERA’s goals have a lot to do with curbing noise and pollution, the project is also an experiment in accelerating the process of how new tech is adopted. Fay Collier, ERA’s project manager, calls this process “maturing” a technology. “We’re trying to shorten that cycle,” he says. Collier led the charge, devoting hundreds of engineers to a handful of concepts in order to “focus a lot of effort and energy on some very promising technologies we wanted to mature.”

It’s a tall order, in Collier’s words, but seems to already be working: Last month, one of the ERA’s innovations was the subject of a new deal between its inventor and a manufacturer. The tech? A wing that morphs while the plane is in flight.

If you’ve ever sat over the wing of a plane, you’ve seen the robotic motion of the wing flaps as they adjust to conditions during landing and takeoff. These flaps—along with the landing gear—are a primary source of noise and drag because of the gaps between them. (Engines have actually quieted down dramatically since the 1960s and 1970s, Collier explains.) A single long wing flap that could still move and adapt would not only make flying more efficient, it would make it much quieter.

That’s the goal of one ERA partner, a Michigan company called FlexSys, which invented a replacement for traditional mechanical flaps, swapping them out for a long, smooth, gently-bending surface. These flaps look a bit like origami: they’re sleek, white, and subtly creased at regular intervals, almost like fans. Working with NASA, the company installed its accordion-like wings on a Gulfstream jet for research—in a video, they bend and shimmy like a living thing.

Dr. Sridhar Kota, the inventor of the flaps, has compared the design to biology. “Eighty percent of living creatures are invertebrates, and they do pretty well with the locomotion and other mechanical functionality without multiple joints and links,” he explains in one NASA video. “How do we get this compliance, the flexibility distributed throughout the structure—and how do you design structures like that?” According to Kota, FlexSys flaps distribute the stress of movement evenly across the wing, which makes them stronger and lighter than traditional wing flaps. And by eliminating gaps, they also deafen the mechanical whirring, squealing sounds you normally hear during takeoff or landing.

To me, this wing sounded—and looked—remarkably futuristic. But thanks in part to NASA’s collaboration during testing, you may see it on planes surprisingly soon: In November, FlexSys announced a partnership with the Seattle winglet maker Aviation Partners. “We’ve been talking about the morphing airplane concept for a long, long time,” Collier says. “It shows the power of focus. We put a lot of time and energy into this over the last six years, and really moved it along.” 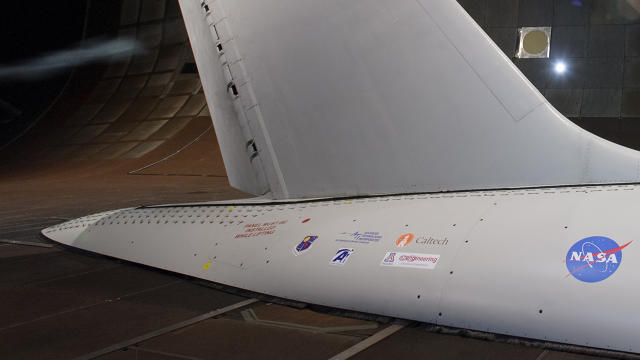 In some cases, the huge scale of these designs require extensive planning just to test. Like one full-scale Boeing 757 tail section which, at almost 30 feet tall, required months of planning to install inside a cavernous NASA wind tunnel, currently the largest in the world.

If you look closely at the tail, you’ll notice that it’s stippled with tiny black dots—each a tiny jet, known as “sweeping jet actuators,” that blow air over the tail to manipulate its natural aerodynamics. This swarm of nozzles create a kind of synthetic wind over the tail—a technology NASA calls Active Flow Control. The heavy tail section of a plane is mostly for stabilizing it and helping it change directions, a function of the way air flows over it. By artificially manipulating that flow, these tiny jets will make it possible to design much smaller, lighter tails on future planes.

Even things as fundamental as where engines and other details are located on a plane could change based on ERA‘s research. In one case, the team created their own version of an unmanned experimental plane designed by Boeing called the X-48C. They modified the original design by taking the “winglets” on the end of each wing (you’ve probably seen these on commercial flights, too) and moving them to a seemingly odd position on the end of the plane’s body, just next to its engines. According to NASA, this made them more like tails than winglets, reducing the decibels created by drag as well.

Based on this experiment, future plane designs might use similar ideas to operate more quietly and cleanly. Another concept, called distributed propulsion, was recently highlighted in a video by The New York Times that showed an experimental wing with many small engines along its length. 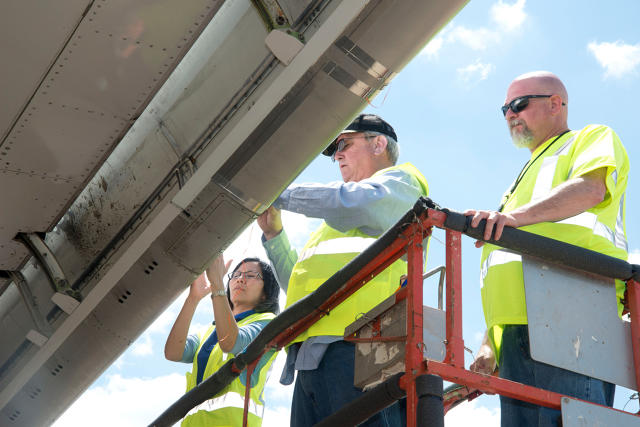 Not every ERA project is massive in scale, though. In fact, some of them would be almost invisible to the average flyer. “Not one of them was more important,” Collier says. Rather, “all of them, together, can make that huge impact.”

Take a series of test flights ERA conducted in Shreveport this summer. Why Shreveport? According to NASA, because it has a hardy bug population, making it perfect for flying tests of a Boeing 757 whose wings were covered in experimental materials engineered to shed the masticated bodies of bugs that splatter during takeoff and landing. As it turns out, bug goo can have a serious impact on fuel efficiency as thousands of bug carcasses cake onto the wings. One material NASA‘s engineers came up with borrows from nature by mimicking a lotus leaf—which has a complex microscopic surface that’s naturally hydrophobic—and reduced the goo by as much as 40 percent.

ERA wrapped up this year, but the lifespan of the technologies that matured during the project is just beginning. When will you see a morphing wing, or a bug-proof plane, while trudging through Phoenix on a layover? It’s hard to say, since the commercialization process is only just beginning, and the onus is on the industry to incorporate these designs. But Collier is optimistic. “What we know is that in many cases, we got these technologies to a readiness level where the industry can now pick them up and incorporate them into their designs,” he says. “That gives a good number of these a good chance to get into the fleet by 2025.” Now, it’ll be up to the agency’s partners to strike up deals with manufacturers and get their technologies into the marketplace.

By focusing a group of people on a narrow list of ideas, ERA has jumpstarted progress that might have taken many years, especially in an organization where brilliant ideas are common but funding may not be. As cutting emissions quickly becomes a matter of life and death on Earth, finding a way to shepherd paradigm-shifting technology into the mainstream is becoming just as important as the technology itself.