The apparel and shoes for Team USA were designed for peak performance—ecologically and athletically.

Ever since the 2006 Olympic Winter Games in Torino, Italy, US athletes on the podium have worn Nike. Nike apparel. Nike footwear. Not just on the podium, either; Team USA athletes competing in about half of the events, from track and field to soccer to speed skating, wear a Nike kit. Thanks to a deal inked last year, that near-ubiquity will persist at least through the 2028 Summer Games in Los Angeles. The swoosh, as they say, is strong.

But that near-ubiquity also comes with a challenge: staying ahead of the curve on said swoosh. With performance technology progressing as fast as it does, how early do you have to start thinking about the gear athletes will need for the next massive quadrennial global competition?

About four years, as it turns out. “As soon as the closing ceremony is over and the flame is passed,” Nike chief design officer John Hoke says, “our work for the next Summer Olympics begins.” That’s not just marketing speak. The 2016 Games in Rio de Janeiro ended on August 21 of that year; in September, a chunk of Nike’s design team was in Japan, meeting with the Tokyo Olympic Committee to see where its members’ collective heads were.

A couple of things became clear very quickly. The first was that Tokyo would be a far cry from Rio. Augusts in the Brazilian city would feel familiar to anyone who’s been to Miami in the winter: average highs around 78 degrees Fahrenheit, and a respite from the usual humidity. Tokyo in August? Not so much. Hot, muggy, ugh.

The second thing the Tokyo committee made clear was their seriousness about sustainability. This wasn’t new to Olympic organizers—dating back to the Sydney games in 2000, officials had implemented measures meant to offset the undeniable impact of being a host city—but Tokyo had a couple of new measures in mind. They’d hired architect Kengo Kuma, known for work that sought to live in balance with its surroundings, to design the National Stadium central to the Games. They’d also committed to making the medals not just from recycled materials but recycled cell phones.

This was all music to the Nike team’s ears. They’d tried designing Olympic gear with a similar ecological bent before, like the running singlet for the 2000 Sydney Games that was made from recycled bottles, but intention and execution didn’t always match up. “It didn’t look great, it didn’t feel great,” Hoke says, looking back on that singlet. But now? With a handful of Olympics and two more decades of science and design innovation under their belt? Tokyo would give them a chance to balance performance and principle.

The resulting gear, which Nike is unveiling today in the first full preview of their Tokyo Games footwear and apparel, seeks to do just that. It’s technically considered to what Hoke calls “the atom level,” employing computational design to deliver either second-skin fit or breathable billows, depending on the sport’s specific needs. It also represents the company’s biggest demonstration yet that sustainability doesn’t have to mean sacrifice—aesthetic, athletic, or otherwise.

By now, of course, we know that those 2016 meetings about Tokyo’s weather dangers have already been borne out. Test events last August met temperatures so high that rowers suffered heat exhaustion and triathletes fared worse. The Olympic Committee responded by moving this year’s marathon 500 miles north to Sapporo in hopes of a less brutal climate.

Heat is a particular devil for track and field; conditions on the track (and, uh, field) can be more than 20 degrees above the ambient temperature. Nike’s apparel for the category seeks to exorcise that demon through a new material it calls Aeroswift, a micro-ribbed version of its popular Dri-Fit technology. It’s like an unbelievably thin, narrow-wale corduroy. Except the ridges in these cords serve two functions: creating a baffling effect that moves air along the skin underneath the fabric, and giving the fabric a two-tone, almost lenticular appearance that can look like it’s flickering when the athlete is in motion.

The apparel for soccer (or “global football,” as Nike calls it) doesn’t quite flicker, but it’s still eye-catching. Nigeria’s kits evoke a traditional agbada robe; Korea’s, a white tiger, in deference to the symbol of courage and power.

Admittedly, there’s not much about these that would earn a commendation from Greenpeace. Like the track and field kit, the soccer apparel prioritizes performance. The same goes for their footwear counterparts: the Air Zoom Mercurial soccer boot pairs a 3D-printed single-piece upper with a Zoom Air bag that extends the entire length of the foot, and the Air Zoom Alphafly Next% running shoe marks the official version of the prototype that helped propel Eliud Kipchoge to the first sub-two-hour marathon ever run. (That said, Nike claims that since 2008, its Air soles all contain at least 50 percent recycled materials, and that more than 90 percent of the waste created in the making of said soles gets reused.)

That’s not to say that all the sneakers announced today are solely about athletics. On the podium, to go with the 100 percent recycled jacket and pants of the Medal Stand collection, all US medalists will wear a new version of the Vapormax sneaker that uses 75 percent recycled manufacturing waste. And while they may never see an official Olympic version, Nike also announced four models of an exploratory sneaker collection called Space Hippie. Each made of at least 85 percent rPoly, a recycled substance made of water bottles, yarn scraps, and T-shirts, the numbered Space Hippie shoes look like post-apocalyptic moon boots, thanks to the recycled foam scraps that make up the soles. (They also look like mashed-up homages to other popular Nike silhouettes, a genetic stew that’ll doubtless inspire sneaker sites to do their best 23andMe impressions.) 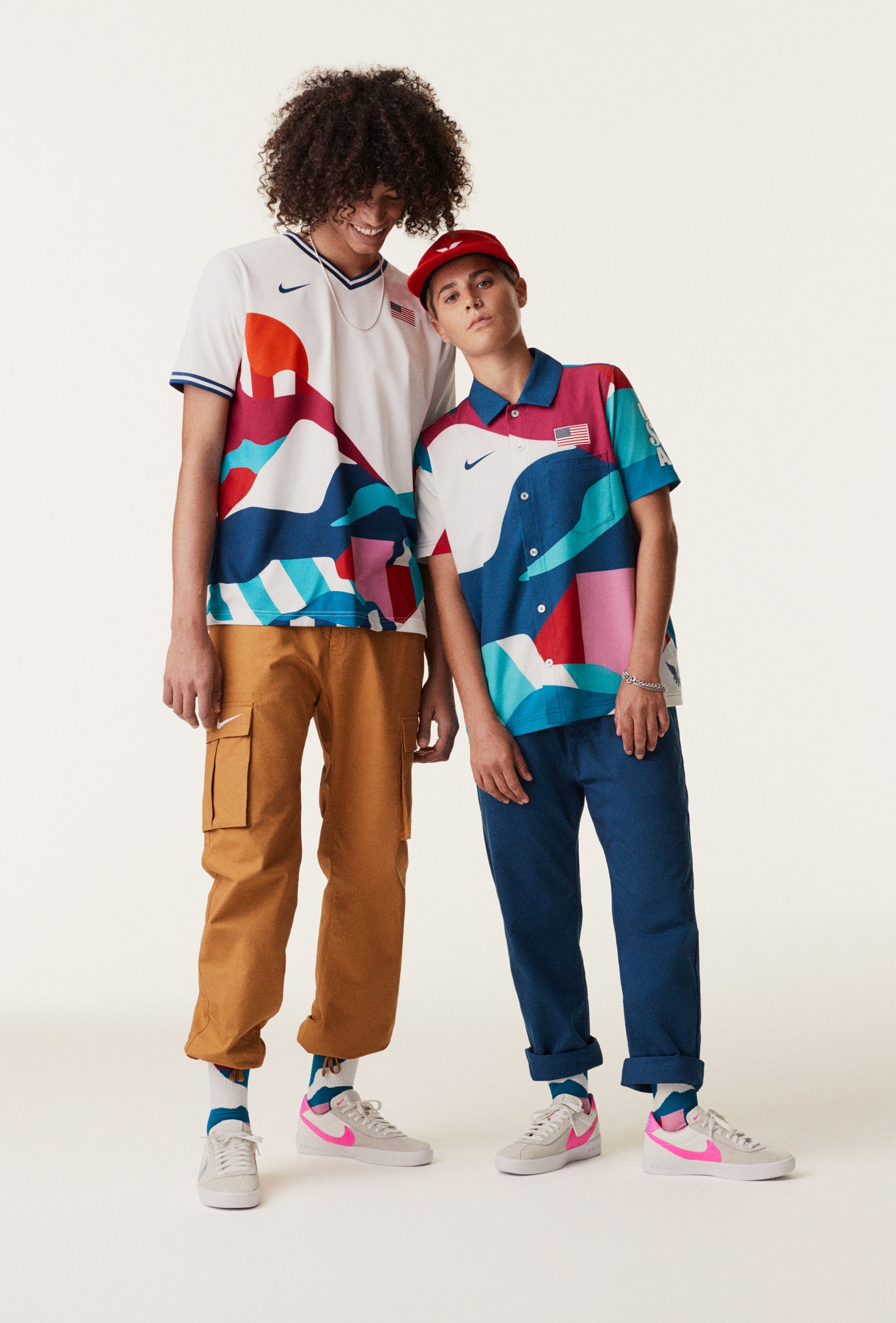 Oddly enough, the Nike Olympic apparel that looks to best balance the Tokyo committee’s concerns of heat management and sustainability happens to be for a sport that’s making its Olympic debut this summer: skateboarding. Yes, ollies can win gold now. (And starting in 2024, so can breakdancing! I’ll wait while you go call your 9-year-old self to tell them the good news.)

“Skateboarding’s a little different because we’re in our normal street clothes, we want nothing to be binding,” says pro skater and Team USA hopeful Sean Malto. “So [the design process]is basically just running through samples and figuring out what works: Where we need certain materials, where we need things to be a little thicker, and then getting the product to a place where we feel light and comfortable.” That light and comfortable end result, designed in conjunction with Dutch artist (and one-time pro skater in his own right) Parra, also happens to be 100 percent recycled polyester.

How this all plays out in the Games, of course, remains to be seen. Sometimes the best-laid planning goes awry—like when event-canceling wind and rain hit during the first few days of the 2016 Rio Games. But if the worst Tokyo can throw at athletes is high heat and humidity, then John Hoke is confident Nike has given those athletes everything they need to triumph over both the elements and the competition. “As designers,” he says, “we’re constantly thrown these constraints to try to work around, to say, ‘How can we not let that be a friction point?’ Because any element of distraction could erode their athletic performance, and we don’t want that to happen.”

And if all goes well? You won’t just be seeing that swoosh on athletes competing on Nike-sponsored teams—you’ll be seeing it on medal podiums throughout Tokyo.