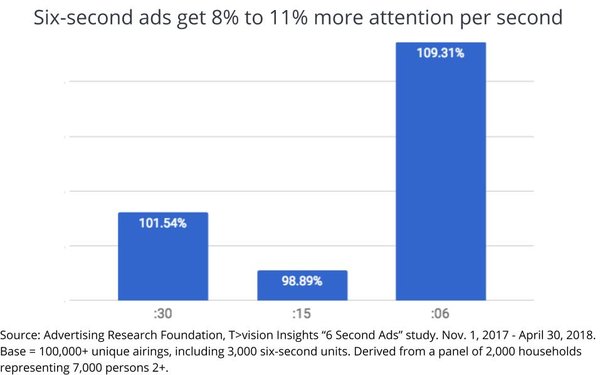 Six-second ads on broadcast and network TV capture more attention per second than standard commercial units, according to an in-depth studyreleased today by the Advertising Research Foundation.

The study, which was conducted with researcher T>vision Insights using a panel of 2,000 households, representing 7,000 persons 2+ utilized technology measuring how long their eyes fixated on the TV screen and what content they were gazing at when the ads ran.

The caveat, the study noted, is that the six-second units typically were placed in “premium” positions — usually the opening spot in a commercial pod —  but the study’s authors also concluded that the shorter-form ad units likely perform better because “they are set up for success,” because they typically appear in “premium” programming, are usually stand-alone units, appear in the first position in commercial pods, and because of “the math of it.”

There likely also is a novelty factor, because six-second units are relatively new to television and only represent a small percentage of the ad units aired.

Even so, the findings are potentially significant, because understanding the communication value of shorter-form ad units has historically been the most sought-after research and insights on Madison Avenue, going back to the transition from 60-second ad units to 30-second ones.

This article first appeared in www.mediapost.com

Joe Mandese is the Editor in Chief of MediaPost.