Brands Woo Millennials With a Wink, an Emoji or Whatever It Takes

David Perel spends at least an hour a day on his iPhone 6. He watches live sports on television and tries to catch “The Late Show With Stephen Colbert” on CBS, but he rarely tunes in to prime-time shows. He does not have a Netflix subscription, but he is thinking hard about getting one.

Mr. Perel, 26, is typical of a generation that grew up on the Internet. These young adults watch less traditional television and do not have a reputation for reading print newspapers or magazines. They skip online commercials and block ads on their web browsers and phones.

No wonder marketers feel as if they are starting over.

“Everything you know about advertising — chuck it,” said Laura Desmond, chief executive of the media agency the Starcom MediaVest Group. “It’s a completely different world and game with millennials.”

For advertisers, that means fewer 30-second commercials and more emojis and apps.

Marketers have long coveted the attention of 18- to 34-year-olds, and this generation is no exception. The consumers in this age group, the thinking goes, are young and influential, and many are getting married and having children. They have discretionary income and are making big purchases like houses and cars. They are also deciding which brands they are likely to remain loyal to for the rest of their lives. 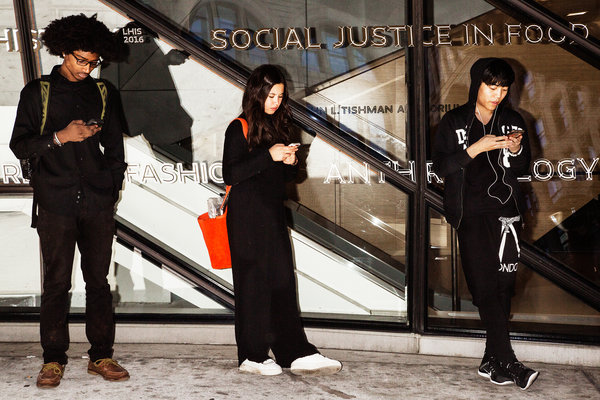 Students at the Parsons School of Design in New York. Younger millennials spend around 91 hours a month in smartphone apps.Credit Amy Lombard for The New York Times

But this generation — the millennials — is also harder to reach. Millennials spend more time watching television shows on demand or streaming them on services like Netflix and Amazon. They tend to have short attention spans and bounce rapidly among smartphones, tablets and desktop computers.

Many, like Mr. Perel, have little tolerance for traditional advertising.

“The ads that don’t appeal to me are a waste of my time,” he said. “I feel like the ads on my phone aren’t that useful.”

As a result, advertisers are racing to adapt to the shifting media habits of millennials, and much of that effort is going toward developing new ways to connect with them on smartphones and tablets, said Matt Britton, chief executive of MRY, a digital marketing agency that focuses on millennials. Most important, he said, brands must find ways to promote their products without using traditional ads.

“Brands need to re-engineer how they reach millennials,” he said. “Brands need to figure out how to add value to a consumer’s life. And if they do that, consumers will seek brands out.”

Some brands, for instance, are trying to figure out how to use emojis, a pictograph-based language of happy faces and hearts that is important to millennials. (According to the Cassandra Report, which is published by the agency Deep Focus, four in 10 millennials said they would rather communicate with pictures than with words.) In December, General Electric introduced an ad campaign on Snapchat in which users could send emojis to G.E. and the company would send back a message with a science experiment. And Domino’s Pizza customers can order pizza by texting or tweeting a pizza emoji.

Brands like Taco Bell and the North Face have tried to use apps to reach more mobile users. Under Armour, which is making a big push to appeal to a broader audience, has bought several fitness-tracking apps.

“This is the most challenging group to target because they really are the first demographic group that isn’t as predictable as others,” said Chad Stoller, a managing partner of IPG Media Lab, a unit within the Interpublic Group of advertising agencies that explores new technologies for media and marketing. “When it comes to this generation, they’re moving around, and they’re so much savvier.” 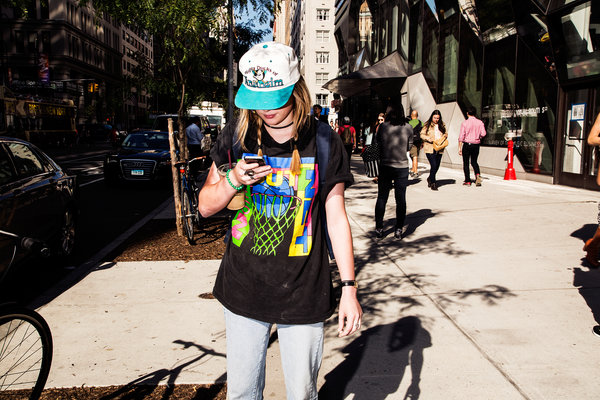 Hilary Sullivan, 21, at the Parsons School of Design in New York. Marketers have long coveted the attention of 18- to 34-year-olds. Amy Lombard for The New York Times

That shift in behavior has been tricky for advertisers. For one, they say, traditional banner ads do not appear as well on the small screens of mobile devices. And it is more difficult to type and click on images on mobile phones, making it especially challenging for advertisers to steer consumers directly from ads to purchases. Even worse for advertisers, millennials are spending an inordinate amount of time in mobile apps, many of which are ad-free, instead of in web browsers.

In the United States, younger millennials, those 18 to 24 years old, spend an average of 91 hours a month in smartphone apps, about 18 hours more than people who are 35 to 44 and 33 hours more than 45- to 54-year-olds, according to a recent comScore report. Millennials spend an average of 30 hours a month in social apps. They are spending more hours on Instagram and Snapchat, which both only recently opened their services to advertisers, and in messaging apps like Facebook Messenger and WhatsApp, which do not yet have ads.

Dominick Tipa, 20, who lives in Brooklyn, says he spends much of his mobile time on Instagram, watching how-to videos on YouTube or listening to music on Spotify. When he sees ads on his phone, he quickly scrolls past them. “A lot of it is spam,” he said.

Brands are also trying to woo millennials by putting on elaborate events. Vitaminwater, part of the Coca-Cola Company, says it has found success with #uncapped, a music event that is going into its fifth year. Ryan Robertson, a senior brand manager at the company, said the goal of these events was to “create memories” rather than try to sell a product. (According to the Cassandra Report, 73 percent of millennials say it is important that a brand is not just trying to sell them something.)

Ad agencies seem willing to try anything — including helping brands put on festivals and pull off outrageous stunts — to help their clients reach this sought-after group.

“Our strategy is pretty consistent across the board. It’s ‘Let them help build this brand with us,’” Glenn Cole, the chief creative officer of 72andSunny, an agency in Los Angeles, said of millennials. But, he added, “How we execute, I think, is very experimental.”

A version of this article appears in print on September 28, 2015, on page B1 of the New York edition with the headline: Marketers Vie for Eyes Typically Trained on Phones.