The producers followed Steven Spielberg’s lead and asked MIT researchers to conjure how our lives might look in 50 years.

When Steven Spielberg asked MIT researchers to John Underkoffler to envision the future for his 2002 sci-fi movie Minority Report, many of the resulting scenarios—drones, ID scans, consumer-tailored advertising—anticipated technologies that would soon become commonplace.

Borenstein, who did graduate research at the Boston university’s Playful Systems Group, consulted with other MIT brainiacs to project a reality-based vision of what urban life might actually look like 50 years from now. Borenstein talks to Co.Create about emotionally customized advertising, camera-embedded contact lenses, traffic-smashing mega-cars and other Minority Report phenomena draw directly on today’s cutting edge technologies. 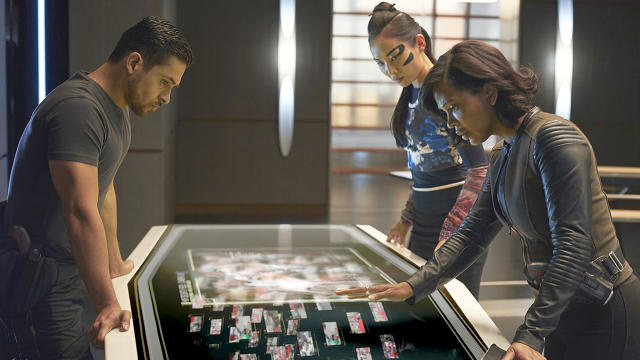 When Dash sits down in a public transit vehicle, the window immediately flashes video ads tailored to his personality and emotional state. “In the original movie, ads were customized for you as you walk through shopping areas,” Borenstein says. “That predicted today’s digital experience where we get tracked moving around the web and see customized ads based on our behavior. For the TV show, we add another layer because research groups are now working to capture not just your identity, but your emotions.”

Borenstein cites Rosaline Picard’s Affective Computing project at MIT Media Lab as inspiration. “They use sensors to detect whether you’re agitated or relaxed by reading everything from your heart rate to micro facial expressions,” he explains. “On Minority Report, not only does the ad know Dash’s identity but it also knows a little bit about how he’s feeling right now. That idea came straight out of the Affective Computing group.”

Dash consults with a hologram-like version of his sister Agatha (Laura Regan), then shuts her into a suitcase. “We’re imagining telepresence as being like the Skype of 2065,” Borenstein explains. “One big problem with telepresence right now is that you’re talking to a picture on a flat screen, and deeper physical interactions can never be captured in that kind of video image. We wanted to extrapolate something like Skype into a rich physicalized presence.”

For Minority Report, he says, “We imagined a 3-D scanning camera pointed at a person. The device then transmits that data to inflatable tissue material that takes on the colors and shape of the sender.” The idea is inspired in part by Professor Hiroshi Ishii’s Tangible Media Group. “They’re trying to move from bits to atoms by making tangible interfaces that actually interact physically with data. Right now Ishii is working on something called the Informed Table, which explores how to collaborate using 3-D scanning cameras and programmable physical interfaces.

In the season premiere, a criminal controls the flight pattern of attack birds via wireless signals that activate implants embedded in their brains. “We’re extrapolating on developments going on right now that enable you to alter the states of neurons in the brains of animals,” says Borenstein. “MIT optic-genetics pioneer Ed Boyden figured out how to genetically modify an organism so the neurons fire electrically when exposed to certain frequencies of light. It’s already been done on worms and mice, so this technology is really just getting started.” 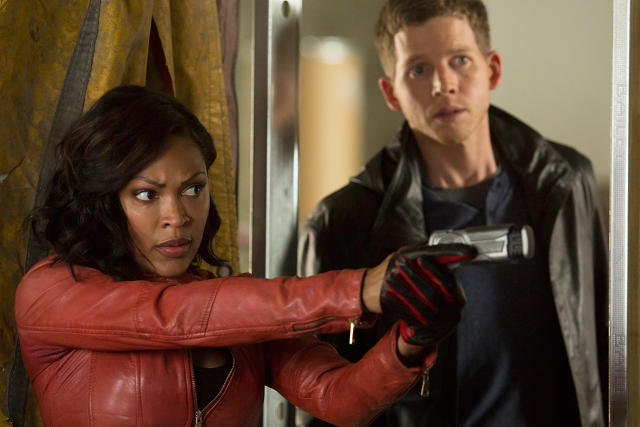 Minority’s Report‘s vengeful villain weaponizes passenger pigeons, which became extinct 100 years ago. Not a problem in 2065, predicts Borenstein. “People are working sequencing the preserved DNA of passenger pigeons and repairing parts of it,” he says. “At some point in the next few years will give birth to a passenger pigeon and the species will be brought back from extinction through these efforts.” Borenstein credits the pigeon subplot to research currently being conducted by Human Genome Project leader George Church and his team. “George is also working to bring back the Ice Age woolly mammoth using those same techniques,” Borenstein says.

When a paranoid pre-cog handler Wally is approached by Detective Vega, he asks her “Is your contact lens still recording?” It’s a sensible question in the future, Borenstein says. “Law enforcement on our show wear augmented reality contact lenses and cameras are a key part of that interface. They’re basically an evolved version of the body camera cops wear today.”

In Minority Report‘s city of the future, people get around in automobiles joined together like train cars to form massive mega-vehicles. “The original movie depicted self-driving cars but that still translates into self-driving traffic,” Borenstein explains. “We tried to imagine how self-driving cars could be used to create a public transit system. As 21st-century cities become more dense, individual cars could come from the suburbs into these busy thoroughfares and interlock physically. They’d use self-driving abilities to react dynamically to traffic conditions so that when passenger-sized cars interlock or disconnect going through these thoroughfares, you’d have the best of individual car system and best of mass transit.

When Detective Vega investigates a crime scene, she visualizes a virtual scenario generated by data collected from the site. Borenstein says “Right now, augmented reality apps on your smart phone can pull out information from video and overlay it. By 2065, we see that evolving into an augmented reality contact lens interface that allows Vega to look into the crime scene and see this data overlay that integrates all the forensic data.”

Borenstein points to products like Microsoft HolloLens and Magic Leap as precedent for the fully loaded contact lens of the future. in Minority Report. “I think of Vega’s system as a game engine or a physics simulation that can take the pattern of glass broken on the floor, fingerprints and DNA found around the apartment to generate this rough cloud of a person. It’s not a video recording because they didn’t see the original perpetrator, but this technology would re-construct what happened so that Vega can quickly figure out how the physical evidence in the room got to be that way.”