There’s no question that establishing authority in your field is one of the key objectives when building a profitable business. This is particularly true in the realm of online business, and let’s face it: nowadays, if you have a business, you most likely have an online presence.

When it comes to business matters, entrepreneurs like to learn from the best; it’s in our blood to constantly seek out the people we’d like to model ourselves after. It’s no surprise, then, that we look to those with lots of followers when coming up with our social media strategies.

Often times, these people are industry “gurus” who appear to be exclusive in their online presence. For example, take Tony Robbins, one of the most renowned life coaches in the world. In my experience, I’ve never seen him personally interact with his followers online – which makes sense, given that he has 2.5 million of them, and couldn’t possibly connect with them all meaningfully. But while this may be true for Tony Robbins, the tides are turning in the online marketing world. There’s a new genre of kids in town, and they expect engagement.

The problem is that being exclusive – having lots of followers, but rarely or never interacting with them – is old-school thinking. In today’s world, hyper-connected by social media, new thought leaders are emerging every day from the woodwork, and they’re gaining momentum at rapid speed. They’re capturing the attention – and wallets – of followers from all over, and quickly turning them into loyal fans. And the way they’re doing this is by engaging.

My favorite example of this is Gary Vaynerchuk, social media guru and bestselling author of Jab, Jab, Jab, Right Hook. Gary Vee, as he’s known by his fans, are loyal, to say the least. They engage, share, and recommend him to anyone that will listen. They even consider themselves to be part of the Vayner Nation. I would know – I’m one of them.

There’s rarely a day that goes by in which I don’t personally recommend work to my clients. I go out of my way to share his content, because I know that I’m not just another follower on his social media feed. And I am sure of this because he’s personally interacted with me on Instagram and LinkedIn.

These interactions probably took him literally two seconds. But they profoundly impacted my perception of him, and are the reason that I recommend him so enthusiastically.

At this point, the entrepreneur inside of you might be asking, “What’s the ROI (Return On Investment) of personal engagement?” Well, let’s say Gary Vaynerchuk makes 5 million dollars a year, making his time worth about 2 cents per second. Like I said, his interaction with me on Instagram probably took about 2 seconds – he simply typed “thx” under a photo I posted of his book. 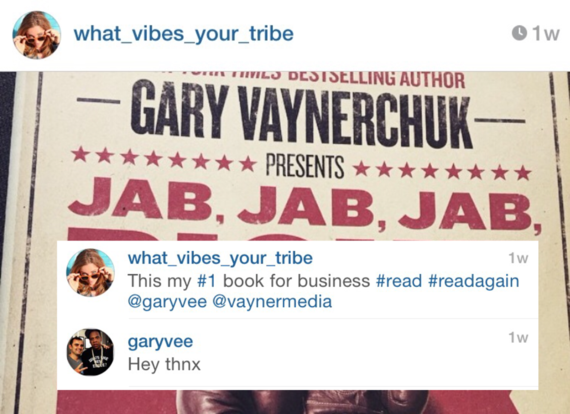 Now, I can say for a fact that I’m personally responsible for the sales of 26 of his books in the last two months, and many more in ebook format. His book retails for $29.99 – so those 26 books equate to about $780. Of course, these aren’t bottom-line figures, but the power of simple engagements is clear: $780 isn’t so bad for a two seconds of his time, huh?

So, how do you know which thought or business leaders you should be engaging with on social media? The first thing I do when I come across an influencer that I’m interested in following is check their Twitter. If they have thousands of follower but are only following a handful back, it sends the message that they don’t find value in others, and are probably not as tuned into what their followers need. Therefore, it tells me that they probably aren’t delivering the best of the best.

But when Gary Vee – or anyone else whose Twitter feed shows that they engage with their following and find value in others – makes a tweet or a post, I stop and listen. I know that he’s tuned in and engaged, so I feel confident that he’s responding to today’s needs instead of reacting to yesterday’s. It’s simple: when I see that influencers are engaged with their people, I trust them, and listen extra carefully to what they’re saying (and what they’re selling). These are the people you should be engaging with.

If you’re an online entrepreneur, how can you engage with your followers without overwhelming yourself and getting bogged down by details? Don’t worry about engaging with literally every single person who follows you – don’t think about it too much. Just take a few minutes out of your day to give props where you get them.

It’s not just entrepreneurs who have been successful with this. New Jersey senator Cory Booker was recently featured in Inc. magazine for his remarkable engagement with his followers. If you haven’t noticed, I’m a huge fan of this kind of engagement, so I took a snapshot of the article and tweeted “props for sending out 46,500 tweets @CoryBooker”. He replied to me personally, saying “thanks for the props”. If a US senator can personally engage on social media, then there’s little reason why you can’t.

Another great example of how engaging pays off is Pat Flynn, the author of the wildly successful Smart Passive Income Blog. Given that he’s such a big name in the industry, I was pleasantly surprised to see that he regularly favorited tweets and interacted with his fans. In July 2015, I attended The Podcast Movement in Fort Worth, Texas, in which Pat gave a keynote speech. 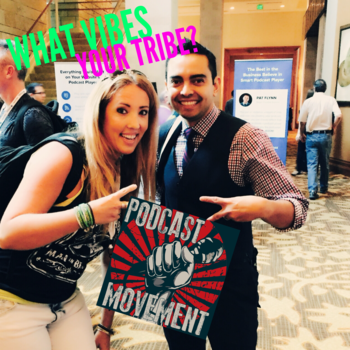 There, I saw that his engagement with his fans wasn’t just online: he was eager to chat with his followers between speeches. When I had the opportunity to speak with him, it was a pleasure, and I could tell that he saw me as a person instead of just another number in his Followers count.
If you engage with your people, they will follow suit; if you act exclusive and unreachable, your fans will too. This will have a direct impact on your community, which, in the long run, will have a direct impact on the growth of your business. Kimra Luna, creator of Be True, Brand You and the Freedom Hackers’ Facebook group, has grown her group to over 13,000 members and generated over $800k in revenue since launching her business in May 2014. And she does this by engaging with her group, making her following know that their voices are being heard. In turn, they listen to hers.

The new kids are in town, and they get that engagement is in and exclusivity is out. Their followers are doing the same, by being equally engaged and generous with each other, thus creating environments that others want to be a part of. And importantly, they know that they can be a part of it, as doing so is mutually beneficial, and will provide value for both you and themselves. This collaborative model is what I strive to foster in my own business – there is no competition, the success of others is celebrated, and providing real value is of the utmost importance.

I want to hear from you. What are you doing as a leader to create an environment of loyal fans and followers? How has a company’s culture – especially on social media – affected your brand loyalty? Let me know in the comments below!

Tweet me @daniellescorp with the hash tag #tribevibes and let me know how you engage with your followers!

As a teen mom and high school delinquent Danielle was told she was lucky to be able to get a job in retail, let alone a career. At 22 she proved them wrong by making over six figures as an Executive Director in corporate. Creating a business that gave her financial and creative freedom had always been her dream. In pursuit of that dream, she became obsessed with freedom based businesses (working from anywhere anytime) and creating passive income products from your intellectual property. Leaving corporate, she created her business What Vibes Your Tribe where she helps entrepreneurs monetize their passion and do what they love full time.