Richard Branson is big-hearted. When you assume responsibilities, he says, you have to be a maneater, ready to defend people and make tough decisions.
by Mark Thompson

It’s dinner-time in London and globetrotter Richard Branson just got in from Africa. I’m meeting him to talk about some of the difficult choices he’s had to make over the course of his career, while he was building the 350 firms that today make up the Virgin Group.

We’re sitting shoulder to shoulder in a corner of the elegant restaurant called Fifteen, flagship of famed chef Jamie Oliver—who’s a personal friend of Branson’s—when a hailstorm erupts so powerfully that the dining room falls suddenly silent.

The timing is perfect for the question I’ve just asked and that tears a guffaw from Richard.

“Some of the ‘few’ tough choices I’ve had to make at Virgin? My God!

When he says this, he opens his arms to the heavens as if begging for mercy.

“Bloody hell! I’ve had to make far too many.” He looks out the window and makes a face. “Tonight looks a lot like the storm that set my house on Necker Island on fire,” he recalls, and he shudders in his seat as if a chill has run up his spine.

Q: You’ve never been a stranger to disaster. You’re always venturing beyond limits, whether reinventing industries or breaking world records, which you just did this year in kite surfing. At 61,you’ve become the oldest man to cross the English Channel. However, instead of being received with cheers and parades, the French police wanted to put you in cuffs and march you and your son, Sam, off to jail.

“In the end, they let us off with a warning. I thought we were allowed to cross the channel, but
apparently, it’s illegal!”
Branson never takes on an enterprise unless it involves bold objectives, like sending commercial flights into outer space. I mention to him that he has had an adventurous, sometimes scandalous life, besides having created dozens of customer-focused businesses. 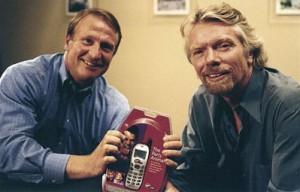 Q: Which companies did you launch with the highest of expectations but that didn’t turn out well?

“The worst business decision we made was when we thought we could bring Coca-Cola down off of its pedestal.” (In 1999, Branson launched Virgin Cola). We gave it a try—and one should try again, or so the saying goes, right? But when you’ve done everything possible, when you know for sure that you aren’t going to be able to make a difference, then you have to face up to the awful truth.”

Q: Right, but now, a group of former Virgin executives have vindicated you: They started a company called Innocent that sells fruit smoothies and were recently being courted by… Coca Cola!

“I’m so proud of them. They’re a great example of how entrepreneurs can identify new consumer needs. They found a way to be successful on a cram-packed market.”

Q: You frequently advise entrepreneurs to take advantage of every opportunity. But these post-recession years have been tough, and the situation is still being felt in Europe. How do you at Virgin decide which businesses to start up and which to get rid of in turbulent times?

“We do business all over the world, from Great Britain to emerging countries like Chile and Brazil. You have to be where there’s growth. Also where there are gaps in quality or service. “Nevertheless, I believe there’s a new way of doing business. We call it Screw Business As Usual. In my book, I give lots of examples of clever companies that do good and do it well, that commit to helping the community in which they operate, which is a great model, since those companies become a real part of their community. It’s a more sustainable scheme and it serves as good publicity. That’s why we created Carbon War Room, to forge an economy that does good, and to establish incentives designed to reverse the problem of climate change. When you turn your business into a somewhat less dirty operation, like we’re doing with fuel at Virgin Atlantic, while other airlines refuse to even try it because they think it’s impossible to generate clean energy for airplanes, we become a better airline and a trademark that people remember.”

Q: Virgin Atlantic has played a predominant role in your businesses, hasn’t it? You’ve made some tough choices, like selling a firm you loved—Virgin Music—to finance an undertaking that was so risky that even your closest allies doubted it could be successful. Virgin Music was the asset you loved best. Selling it must have broken your heart.

“Selling Virgin Music to EMI was a decision that made me feel miserable. But, you know, good fortune sometimes is with you on the road you take. Suffice it to look at where that business has gone since then, and Virgin Atlantic is still flying high.”

Q: But not even the board of directors liked that idea.

“That’s true. When I told them I wanted to start an airline, the directors of Virgin Music were furious. They didn’t think it was going to work, and even I wasn’t sure that it would be successful. But I did know that flying on other airlines wasn’t a pleasant experience, and I thought we could do it better.”

Q: When you launched the company, you were convinced that customers needed a different experience. But you weren’t familiar with the industry and you didn’t seem to be bothered by the fact that most airlines don’t make any money for a long time.

“We knew there would be demand. The prevailing service was so bad. We were looking at the industry from a new perspective. That’s why we created the ad that said: ‘Virgin Atlantic, more experience than our name suggests!’”

Q: And Virgin almost blew up in mid-air on its first flight.

“We didn’t want our maiden voyage to go unnoticed, so we filled it up with employees and journalists. And when we were taking off, one of our engines blew up. It wasn’t so good to start up with a big bang. But the biggest problem was that we didn’t have any insurance. That day, we lost a million dollars. And that meant we weren’t going to cover our bank overdraft. When I got home, I found the accounts manager from the bank sitting on my doorstep. I invited him to come in, and he told me he wanted to declare Virgin Group bankrupt. I accompanied him to the door and gently threw him out. I couldn’t believe he planned to turn 5,000 people out into the street.”

Q: You struggled for a long time to turn Virgin Atlantic into a successful company, and the whole time with British Airways stuck there like a thorn in your side.

“I had a bit of fun when British Airways had technical trouble with the London Eye (the iconic observation wheel on the banks of the Thames near Parliament). I had a dirigible, as it turns out, so we flew over there and filmed the whole thing. We took photos and sent them to the newspapers. The next day, it was on the front page with the headline: British Airways Can’t Get It Up!

Q: British Airways recently said that Virgin wasn’t, after all, a trademark.

Branson smiles and shakes his head incredulously.
“That’s news to me!”
He automatically sends out a tweet to his 2.3 million followers to joke about British Airways’ comments. And yes, Branson is the author of his own tweets, which he writes in his own irreverent style and with his racy jokes. Over a three-day period, I saw him send out a dozen tweets. The personal commitment of Branson—a politically incorrect man who wears no masks—to the most controversial of issues and to the causes people care about is one of the reasons that Virgin, and he himself, continue to be the best known and most admired trademarks in the world.

Mark Thompson is a colleague and friend of Richard Branson’s. He is the founder and CEO of the Virgin Unite Centre for Entrepreneurship. Richard Branson selected him as one of six judges for Virgin Unite’s “Screw Business As Usual” entrepreneurial competition. Thompson is a conference lecturer, a world renowned coach, a risk capitalist and a Tony-nominated Broadway producer. His latest book is called Admired: 21 Ways to Double Your Value.