In looking to its past, the company recognized the unique capabilities that provide it with inspiration and direction. See also “How Adidas Found Its Second Wind.” 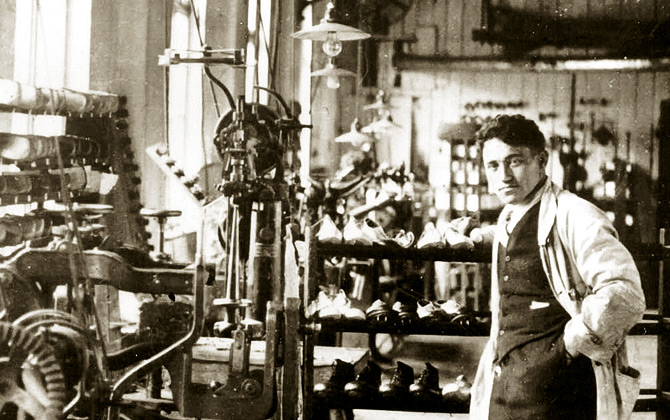 In 1924, Adi Dassler, a cobbler by training and a keen sportsman, started a shoe company with his brother Rudolf. Adi’s method seemed simple: He observed athletes, talked to them about their needs, and then experimented with novel ways of solving their problems. While Adi concentrated on innovation and production, Rudolf was busy selling. The brothers were successful from the beginning. In 1925, Adi began submitting what would eventually be hundreds of patents for sports shoes, the first being for running shoes with hand-forged studs and soccer boots with nailed leather studs.
Pictured here is Adi Dassler, in 1925, in his shoe factory 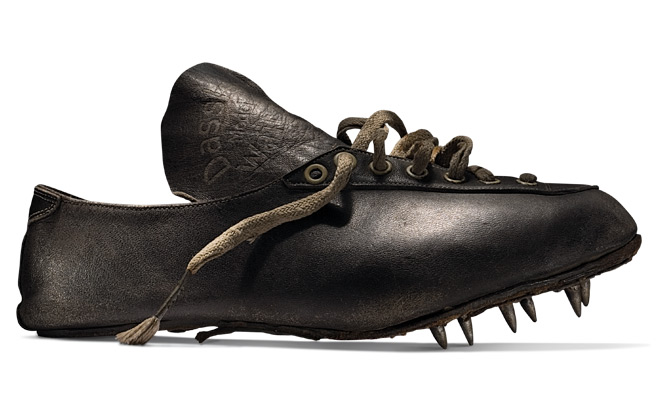 Just three years later, in 1928, Lina Radke, wearing shoes made by the Dassler brothers, won Olympic gold in the women’s 800m. In 1936, Jesse Owens won four gold medals in Dassler shoes. By 1938, the company was producing 1,000 pairs of athletic shoes a day.  However, after World War II, the brothers fell out and split the existing business. Rudolf set up Puma, and Adi launched Adidas. The two companies reflected the brothers’ interests: Puma adopted a more sales-oriented business model, and Adidas was more product focused. Until the arrival of Nike in the 1960s, these two companies dominated the global sports shoe market.
Pictured is the shoe worn by 1928 Olympic gold medalist Lina Radke in the women’s 800m. 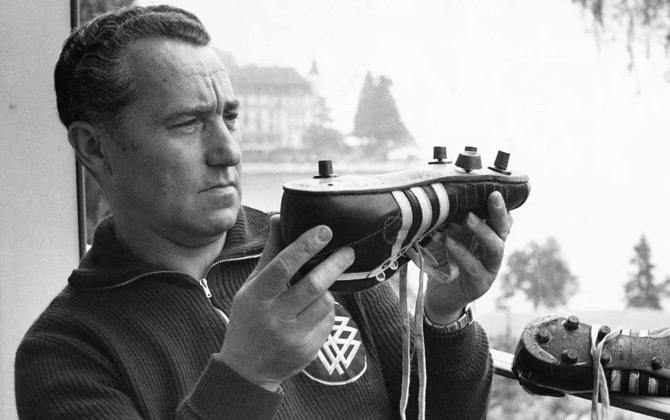 During Adi Dassler’s lifetime, Adidas continued to expand and develop into new markets and sports. But the company was always united by Dassler’s belief in “only the best for the athlete” and his philosophy of industrialized craftsmanship. The latter involved creating products that were designed to perform for individual athletes but that could be produced at an industrial scale. Dassler constantly experimented. For example, in the 1954 soccer World Cup in Switzerland, the West German team won, against all expectations, wearing lightweight Adidas shoes with new screw-in studs. At the time, traditional soccer shoes weighed in around 500 grams (or roughly 18 ounces, and about twice that when wet). Dassler observed that in a 90-minute game, on average, a given player’s foot was in contact with the ball for just 90 seconds. So he reengineered soccer shoes to be lighter (only 350 grams, or about 12 ounces) and geared more toward running.
Seen here is Adi Dassler, holding the 1954 “Miracle of Berne” shoe worn by the West German soccer team. 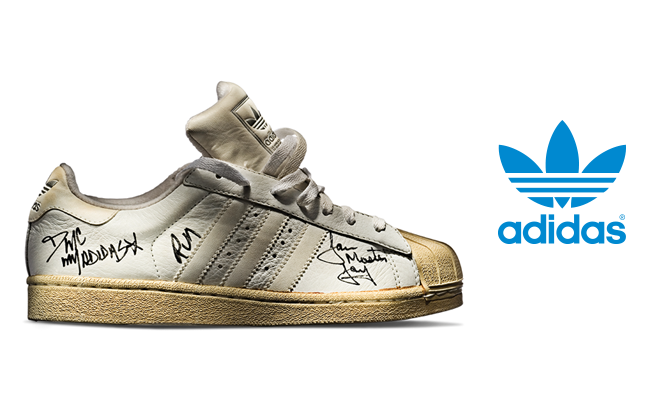 The trefoil logo was created in August 1971, and first used on Adidas apparel in 1972 for the Olympic Games in Munich. However, the late 1970s and early 1980s were difficult years for Adidas. Employees were confused about the company’s direction, innovation had no focus, design and product quality deteriorated, margins suffered, and opportunities were missed. Still, Adidas had a hit in 1986 thanks to the street connection and emotional appeal of the shoes worn by hip-hop group Run-D.M.C., whose hit album Raising Hell album featured the single “My Adidas.”
Pictured is the Superstar shoe signed by the members of Run-D.M.C. 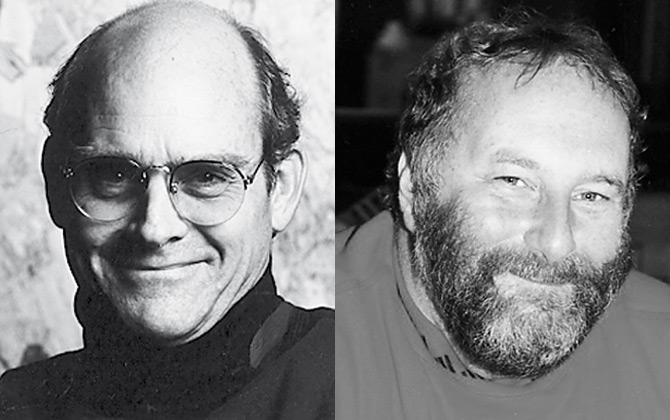 In 1989, with the company at a crossroads, then CEO René Jäggi invited two ex-Nike managers, Peter Moore and Rob Strasser, to visit Adidas. Moore [pictured, at left] remembers that first meeting. They were taken to a small museum of artifacts at the company’s headquarters. “It took only about five minutes in the museum before I realized that these people had a gold mine in their hands, and that they really had no idea what they had,” Moore says. The former Nike managers saw that the core of the company had been Adi Dassler’s hands-on approach to innovation — his philosophy of industrialized craftsmanship, as well as his closeness to athletes and his intimate understanding of their needs. Moore and Strasser [pictured, at right] recommended renewing Dassler’s approach, and developed a new product line called Adidas Equipment. 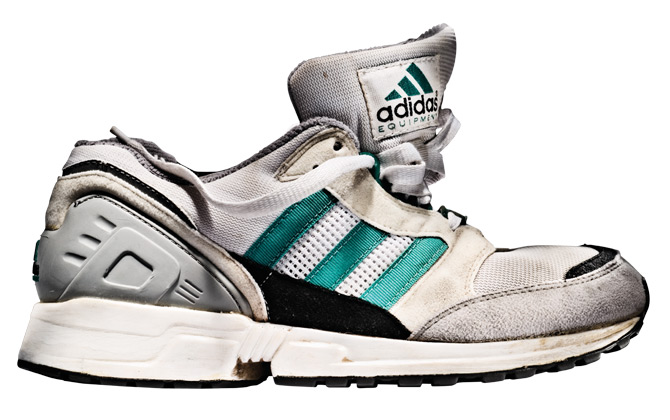 Moore and Strasser created branding rules for Equipment, which was launched in 1991 and later evolved into Adidas Performance, that emphasized product quality. For example, they placed restrictions on the color, sizing, and placement of the logo, and initially even on the colors of the shoes themselves. They wanted consumers to focus on the quality of the shoe, and not be distracted by other features. They wanted to make the product the hero, just as Dassler would have done. “The model was to go back to what Dassler had tried to do all his life, which was to make the best products for the athlete to compete in,” Moore says. Reconnecting in this way was emotionally uplifting — especially for those who had worked with Dassler — and helped restore employees’ confidence. Today, Performance represents the core of the Adidas brand and accounts for more than 75 percent of its sales.
Pictured is the EQT 1991 shoe from the original Equipment line. 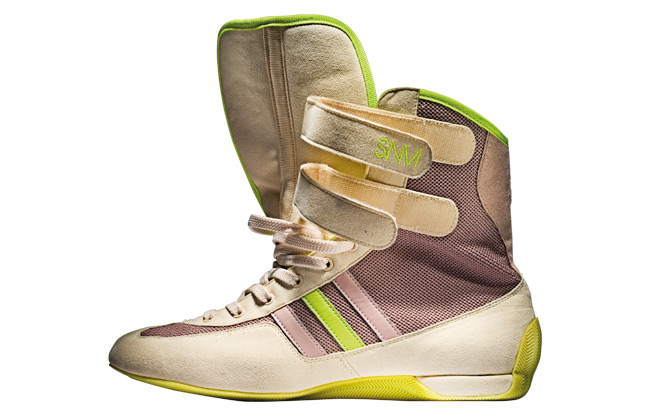 Although Adidas looks to its past, it doesn’t live in it. Rather, it uses its capabilities alongside insights into consumer behavior to create contemporary and innovative products. The company also extends its way of thinking into its partnerships, encouraging partners to uncover the essence of the Adidas brand, while pushing them to challenge it. For example, partners such as Yohji Yamamoto and Stella McCartney can draw on their premium fashion positioning to open up new audiences and sales channels while also encouraging Adidas’s own designers to be more adventurous. As Steve Vincent, a senior vice president of Adidas Future, says, “That’s the challenge — to do completely disruptive things that no one’s ever seen or expected, but still feel like they should come from this brand.” Today, managers, innovators, and designers at Adidas pore over company history, and determine what to discard and what to keep. They reach back to the lessons of the past and stretch forward to adapt to the changing needs of athletes and consumers. The results speak for themselves: Adidas has transformed itself from a consistent