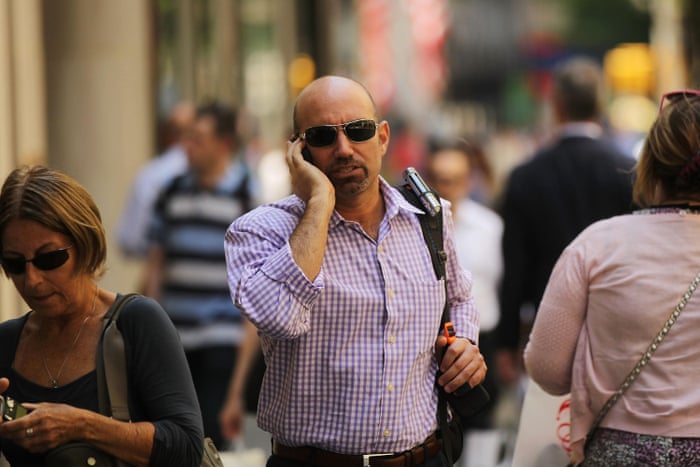 A recent study of 14,000 pedestrians in Amsterdam, Berlin, Brussels, Paris, Rome and Stockholm has found that 17% of people use their smartphone while walking. Photograph: Spencer Platt/Getty Images

Traffic lights are being installed in pavements in Sydney to prevent accidents caused by pedestrians distracted by their phones.

Lights will be installed at five key crossings in the central business district in December as part of a six-month trial by the New South Wales government.

The “in-ground traffic-light technology”, which will shine red to indicate when it’s dangerous for pedestrians to cross the road, will cost A$250,000 (£125,244).

The executive director of the NSW Centre for Road Safety, Bernard Carlon, told 702 ABC Sydney that instances of pedestrians using smartphones while walking were “highly prevalent”.

“Just the tragedy of the number of pedestrians that have died on the road in the last 18 months, we’re looking at every opportunity to make the environment safer for pedestrians.”

In 2015, 61 pedestrians were killed on NSW roads – an increase of nearly 50% from 2014. The exact number of accidents in which the use of smartphones was a factor is not known, but Carlon said research showed that pedestrians listening to music were four times more likely to take risks when crossing a road.

A 2014 study by researchers at the University of Queensland also found that texting while walking put people off balance, making them less likely to walk in a straight line.

“You think that walking is such a simple skill until you put a phone in someone’s hand,” Siobhan Schabrun, the lead author, told the Australian at the time.

The NSW trial is one of several measures introduced to protect pedestrians in the state government’s Towards Zero campaign, which was launched on Sunday and aims to to reduce the road death toll.

In fewer than six months, 164 people have died on NSW roads, 38 more fatalities when compared with a similar period last year.

The NSW roads minister, Duncan Gay, said last week that road users had become “complacent” about deaths on the roads.

“I can invest billions into making our road network safer and continue to deliver our road safety programs but I cannot control drivers, riders or pedestrians from making bad choices,” he said in a statement.

“People need to make smarter choices and think about all the other innocent road users around them.”

The Gold Coast City Council is also looking at trialling the technology in the Queensland city.

While laws forbidding the use of smartphones while driving are common, reducing injuries and fatalities associated with distracted walkers remains an important issue for lawmakers around the world.

The in-ground traffic lights are already in action in two German cities, Cologne and Augsburg, outside Munich.

In Germany, “smombie” – a mashup of “smartphone” and “zombie”, capturing the obliviousness of pedestrians texting while walking – was voted Youth Word of the Year last November.

A recent study of 14,000 pedestrians in Amsterdam, Berlin, Brussels, Paris, Rome and Stockholm found that 17% of people used their smartphone while walking. That figure rose to almost a quarter for those between 25 and 35 years of age.

In March, a New Jersey lawmaker introduced legislation that involved a fine of US$50 for pedestrians who used their phones while crossing the street, Philly.com reported. Persistent offenders could face 15 days’ imprisonment.

Elle Hunt is a reporter for Guardian Australia.