When people talk about Iris van Herpen, they often talk about unlikely intersections: of fashion and technology; technology and craftsmanship; otherwordly creations and those inspired by nature. Sarah Schleuning, the curator of Iris van Herpen: Transforming Fashion, opening next week at the High Museum in Atlanta, throws another one into the ring: a blend of singular focus and big, expansive ideas.

“Her interests are insular, but she has a very big vision of the world,” says Schleuning. “It’s that balance between having a very singular vision and voice, but at the same time she’s very open and broad about who she wants to collaborate and share ideas with. They’re not the usual subjects—they’re scientists, they’re artists, makers, great thinkers in all kinds of field. I think that allows for that kind of expansion for what’s possible.”

The first major exhibition of van Herpen‘s work in the U.S., Transforming Fashion covers every couture line of her career thus far, putting on full display her futuristic and darkly fantastical designs and the evolution of her work since she launched her line, right out of school, in 2007.

After studying fashion design at the prestigious Artez Art Academy, van Herpen interned for Alexander McQueen in London, where she was introduced to the type of intricate handiwork that has made its way into nearly all of her creations. Her first couture line, Chemical Crows, which hit the runway during Amsterdam Fashion Week in 2008, started out as an experiment in form using the trines of a kid’s broken umbrella. In a 2013 collaboration with designer Jolan Van Der Wiel, van Herpen grew her collection from magnets. In another 2013 show, this one for her collection Voltage, her models stood atop a Tesla coil with electricity coming out of their limbs. Each of her collections is new, shocking, and inventive—and many explore new material with an expert in another field. But each deal with similar themes of nature, possibility of the future and the implications of emerging technologies.

“Her network of collaborators and people she’s connected to have really grown to this global scale. In her first collection you see a very focused vision of what she’s trying to create—it all makes a cohesive statement and you know that it’s her making them, and it’s very much about the craftsmanship,” says Schleuning. “As she goes on she starts getting interested in working with other people and opening herself up to all these new ways of making, new methods, new ideas and inspirations. And her work just grows. It’s like the shell patterns that she creates—it starts very small and focused and it just continues to fan out in incredible ways. But I always see her voice and vision, the expansion of possibilities.”

Van Herpen has made a name for herself as a master of theatrics on the runway, but Schleuning says that’s not what draws people to her. “It’s a confidence and clarity of voice. It’s not being avant-garde for some sort of spectacle, it’s to make this great idea that she’s trying to project and and make visual to people in a lot of different ways.”

Below, Schleuning points to four of van Herpen‘s most stunning designs that she’s created over the last eight years. 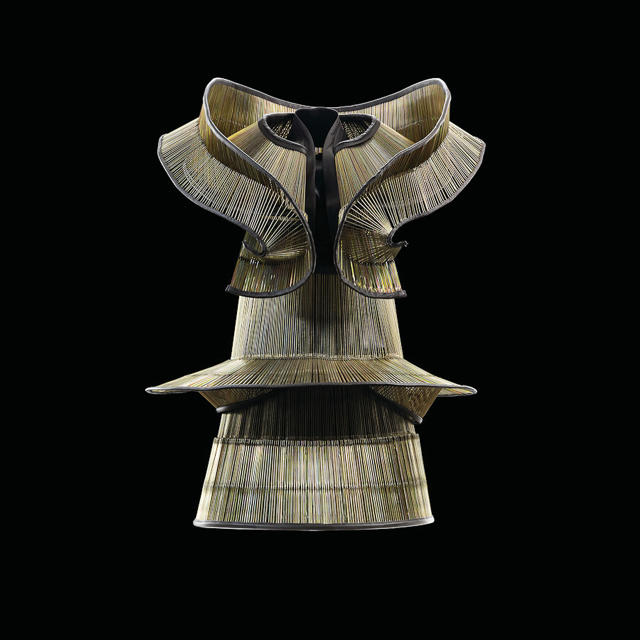 Chemical Crows (2008)  ”This is an amazing work because she uses the umbrella tines and she weaves it with industrial thread to create a fabric,” says Schleuning. “To me, it’s when you first begin to see her use nontraditional materials in unique ways. But really solving some of the practices of couture and handwork and creating a fabric and a form and shape that has an essence of wearability.”

Refinery Smoke (2008) ”You see her using industrial mesh that’s corroding over time. When she showed it on the runway it was incredibly pristine and maintained that kind of silver sheen but now it’s slowly oxidizing and corroding,” says Schleuning. 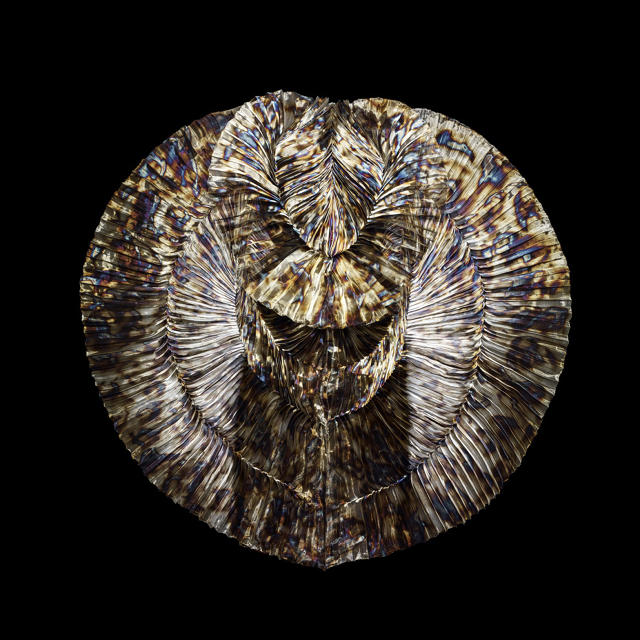 Hacking Infinity (2015) ”This is kind of reminiscent to me of what she did in Chemical Crows, but instead of using those brass tines she creates a fabric…by weaving tiny stainless steel threads. Then she takes a blue flame torch and creates a batik-like pattern and creates different colorations and forms on the fabric,” says Schleuning. “She creates incredible this hand pleating form, but because the steel is in it it keeps the shape and structure.”

Magnetic Motion (2014) ”It was one of her explorations in trying to capture nature, and at this point it was the crystallization of water. It’s 3-D printed out of a translucent polymer, resin and it’s printed in these ribbons so it almost looks like ice,” says Schleuning. “[Van Herpen is] interested in that tension between the organic and the technological. She looks at things like fractals and the way nature is such a huge inspiration for her and these organic shapes in the body. At the same time, she has such an attraction to nontraditional materials, methods, new technologies and, in the end, how it serves her vision.”

Displaying 45 pieces from van Herpen‘s 15 couture collections, Transforming Fashion shows the dynamic career trajectory of a designer who is constantly evolving. “Each collection was it’s own individual statement, that’s how they’re conceived, but as you go through the show you start to see reoccurring themes and collaborators that she continues to work with and ideas she continues to explore,” says Schleuning.

[All Images: via Iris van Herpen]

Meg Miller is an assistant editor at Co.Design covering art, technology, and design.