Advertising’s Moral Struggle: Is Online Reach Worth the Hurt?

Advertising on the internet has never been easier. Data and automation increasingly allow companies large and small to reach millions of people every month, and to tailor ads to specific groups based on their browsing habits or demographics.

Now, however, the marketing industry is facing a moral quandary in the face of a national debate over the role that fake news played in the presidential election and the realization that many websites that promote false and misleading stories are motivated by the money they can make from online advertising.

In the zeal to follow consumers wherever they may roam on the internet, advertisers now risk bankrolling sites that are toxic to society, whether by amplifying manufactured political stories or by spreading conspiracy theories virulent enough to drive a man to walk into a Washington pizzeria with a gun. That has inserted a new ethical cost into the automated advertising equation, which promises companies large, desired audiences at low prices with little need for human intervention.

“I would much rather pay a little premium as a brand and go for verified sites,” Raja Rajamannar, the chief marketing officer of MasterCard, said, noting that the company mostly advertised on sites it had evaluated and approved. “But it’s a question again of how much and where. And I think all brands are doing this soul-searching at this point in time.”

The problem is, most advertisers do not have the size or the financial wherewithal of MasterCard to simply opt out of the automated system as it now exists. And even if they do, there are tantalizing financial incentives to stay put.

Much online advertising capitalizes on the lure of the so-called long tail of the internet — sites that draw relatively small but attractive audiences, like blogs for new parents or forums for truck enthusiasts. Advertising on those sites costs a fraction of what it does on more prominent online destinations, which typically deal directly with advertisers.

Money is funneled to smaller sites through a complex system of agencies and third-party networks, which can resemble a stock exchange. This system, known as programmatic advertising, allows brands to collect many millions of impressions — an industry term that generally indicates that an ad has been displayed and can be viewed.

But the lack of human oversight in this nascent industry has also led to confusion and mistakes. Technology has emerged to protect brands from showing up on sites that traffic in, say, pornography or spam, but those measures have been found wanting when it comes to disinformation. That kind of content is more difficult for security firms to detect than “open hate speech or nudity or violence or any of the normal stuff that you would stay away from,” said John Montgomery, executive vice president for brand safety at GroupM, part of the advertising giant WPP.

Joe Marchese, president of advertising products for the Fox Networks Group, said the system, set up to reward clicks and impressions, had fueled the growth of low-quality sites well beyond those focused on made-up political news.

“Honestly, the long tail is to advertising what subprime was to mortgages,” he said. “No one knows what’s in it, but it helps people believe that there is a mysterious tonnage of impressions that are really low cost. But low-cost impressions would mean low-cost human attention. How can any publisher of quality content survive on low-cost impressions?”

Marc Goldberg, chief executive of Trust Metrics, an ad safety vendor, said the effort to remove bad actors ignored the fact that many advertisers value impressions over everything else. They would rather not choose and monitor what websites they are appearing on, he said, because they worry they will miss out on potentially lucrative destinations.

“What they’re doing is introducing all of these bad sites into our ecosystem and not having the means to monitor them appropriately and effectively,” he said. “The big problem in our industry is our expectations of scale are not aligned with reality.”

Relatively speaking, the money going to fake political news is minuscule, but it has taken on outsize significance because it reflects a world in which marketers are often not paying attention to where their ads show up.

Teenagers overseas and entrepreneurs in the United States discovered this year that they could earn thousands of dollars a month by writing wholly fictionalized or wildly exaggerated partisan political news intended to be spread on Facebook. They then reaped money from Google Ads and other networks after credulous readers in the United States clicked through to their sites. 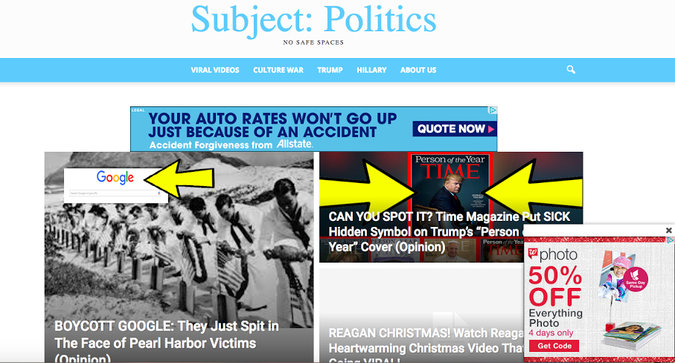 Allstate and Walgreens ads have appeared on a website that has fueled conspiracy theories and published misleading content.

“A lot of ad buying systems are trying to show the right ad to the right person at the right time, and you see that mantra of those three variables across the industry,” said Michael Tiffany, the chief executive and a founder of White Ops, an ad fraud detection company. “Note how ‘on the right site’ doesn’t make the list.”

Workable, a software start-up based in Boston, recently joined companies like Kellogg and Allstate in pulling ads from the hard-right website Breitbart and blaming automated ad technology for their appearance.

It is also watching out for its ads on fake news sites, which can slip through the cracks. Workable has about 110 employees and 6,000 customers but advertises on more than 50,000 sites a month through Google.

“Typically, Google has done a good job of keeping us off of low-quality sites,” said John Short, vice president for demand generation at Workable.

He added, “With fake news sites, or whatever you would like to call them, we need to be more alert.”

Facebook and Google have both said they plan to target misinformation. Facebook announced this month that it was experimenting with allowing users to report false stories and forging partnerships with outside fact-checking organizations.

This month, Robert Thomson, the chief executive of News Corporation, which owns The Wall Street Journal, described the digital ad market as “dysfunctional.”

Instead of using television networks, newspapers and magazines as proxies for reaching certain groups of people, many media buyers have been trained by automated advertising to use data and technology.

Andrew Casale, the chief executive of Index Exchange, an advertising exchange, estimated that all the titles owned by the top 50 traditional media companies, including The Washington Post, Hearst and Condé Nast, probably accounted for 5 percent or less of the trillions of ad impressions available for sale each day.

Overall spending on automated banner displays and video ads will grow to $18.7 billion this year worldwide, and the United States will account for half of that, according to Magna Global, a major ad-buying firm.

“The problem, I think, for marketers is they’ve been trained to value media universally,” Mr. Casale said. “Fake news sites have really, really low prices and rates and tons of scale, so it’s almost like a drug.”

Such transactions, occurring in real time en masse, open the door to fraudulent operators that use robots to impersonate people clicking on digital ads, Mr. Tiffany said, which can give buyers “a false expectation of the real achievable reach at a given price point.”

Mr. Thomson said he expected such programmatic advertising to come under even greater scrutiny.